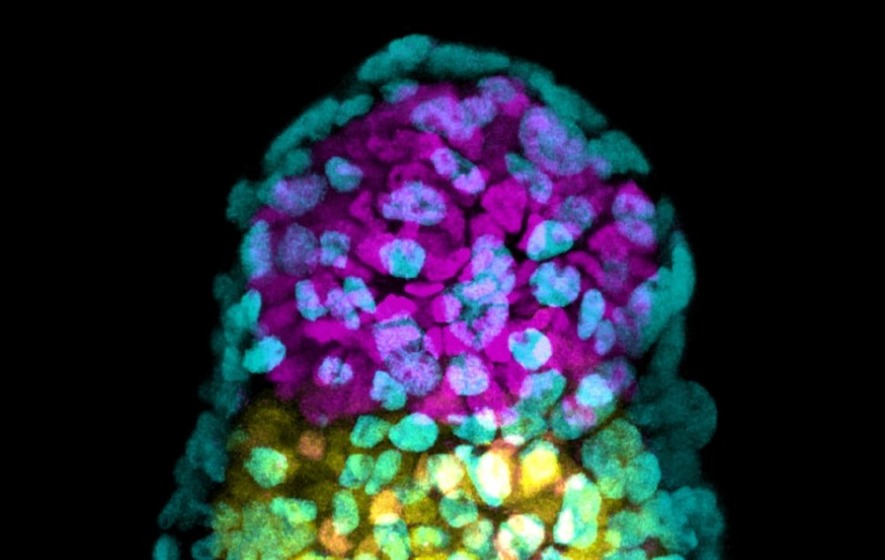 Artificial embryos built from scratch using stem cells have been created by scientists.

Researchers bypassed the act of fertilisation by growing the self-assembling structures in the laboratory.

Although the cells used came from mice, the experiment has opened up a new frontier in embryo research with major ethical implications.

Creating embryos in the lab is expected to help scientists unlock the mysteries of early human development.

However, one expert said any artificial embryos made from human stem cells would have to be the subject of an “ethical discussion”.

Attempting to create a baby from such a technique would be outlawed in the UK.

The Cambridge University team led by Professor Magdalena Zernica-Goetz had previously used two types of stem cell and a “jelly” scaffold to produce a much simpler 3D structure resembling a mouse embryo.

Now the scientists have taken a big step forward by bringing together all three stem cell types that form the basis of a fully formed embryo.

For the first time, the embryo-like structures they created were capable of “gastrulation” – the critical point at which an embryo divides into three distinct layers that determine the future fate of its cells.

Only after gastrulation can an embryo go on to develop into a viable foetus with all its tissues and organs in the right place.

Prof Zernicka-Goetz said: “Proper gastrulation in normal development is only possible if you have all three types of stem cell. In order to reconstruct this complex dance, we had to add the missing third stem cell.

“By replacing the jelly that we used in earlier experiments with this third type of stem cell, we were able to generate structures whose development was astonishingly successful.”

The artificial embryos were observed undergoing gastrulation and organising themselves into the three fundamental body layers, known as the endoderm, mesoderm and ectoderm.

Cells from the endoderm – the innermost layer – go on to form the digestive system, liver, pancreas and inner part of the lungs.

The mesoderm, or middle layer, produces the circulatory system, lung surfaces, skeleton and muscular system. The outer ectoderm contains the blueprint for the hair, nails, skin and nervous system.

The research is reported in the journal Nature Cell Biology.

Dr Berna Sozen, another member of the Cambridge team, said: “I still clearly remember the moment that I and my co-author saw these structures for the first time. It was a breathtaking moment. Those moments are what we live for in science.”

She added: “Now we have a way of simulating embryonic development in the culture dish, so it should be possible to understand exactly what is going on during this remarkable period in an embryo’s life, and why sometimes this process fails.”

Under British law, only donated human embryos less than 14 days old can be studied in the laboratory, after which they have to be destroyed.

Artificial embryos could help scientists study events in human pregnancies beyond day 14 without breaking this rule.

Dr Christophe Galichet, from the Frances Crick Institute in London, said: “It is not too far-fetched to think the technique could one day be applied to studying early human embryos.

“These self-assembled human embryos would be an invaluable tool to understand early human development as well as understanding when things go wrong, but we are not there yet.

“Furthermore, ethical discussion would need to assess the status of these self-organised embryos if the method described in this paper did work with human stem cells.”