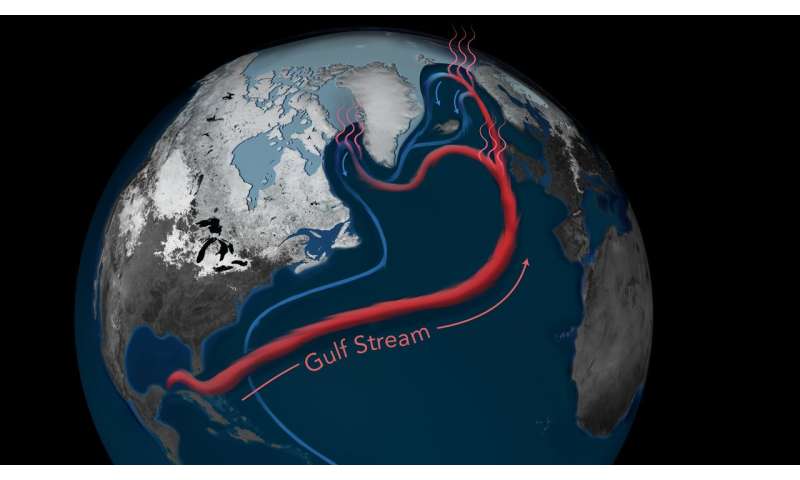 The ocean currents that help warm the Atlantic coasts of Europe and North America have significantly slowed since the 1800s and are at their weakest in 1600 years, according to new research my colleagues and I have conducted. As we’ve set out in a new study in Nature, the weakening of this ocean circulation system may have begun naturally but is probably being continued by climate change related to greenhouse gas emissions.

This circulation is a key player in the Earth’s climate system and a large or abrupt slowdown could have global repercussions. It could cause sea levels on the US east coast to rise, alter European weather patterns or rain patterns more globally, and hurt marine wildlife.

We know that at the end of the last major ice age, rapid fluctuations in the circulation led to extreme climate shifts on a global scale. An exaggerated (but terrifying) example of such a sudden event was portrayed in the 2004 blockbuster film The Day After Tomorrow.

The recent weakening we have found was likely driven by warming in the north Atlantic and the addition of freshwater from increased rainfall and melting ice. It has been predicted many times but, until now, just how much weakening has already occurred has largely remained a mystery. The extent of the changes we have discovered comes as a surprise to many, including myself, and points to significant changes in the future.

The circulation system in question is known as the “Atlantic Meridional Overturning Circulation” (AMOC). The AMOC is like a giant conveyor belt of water. It transports warm, salty water to the north Atlantic where it gets very cold and sinks. Once in the deep ocean the water flows back southwards and then all around the world’s oceans. This conveyor belt is one of the most important transporters of heat in the climate system and includes the Gulf Stream, known for keeping western Europe warm.

Climate models have consistently predicted that the AMOC will slow down due to greenhouse gas warming and associated changes in the water cycle. Because of these predictions – and the possibility of abrupt climate changes – scientists have monitored the AMOC since 2004 with instruments strung out across the Atlantic at key locations. But to really test the model predictions and work out how climate change is affecting the conveyor we have needed much longer records.

To create these records, our research group – led by University College London’s Dr. David Thornalley – used the idea that a change in the AMOC has a unique pattern of impact on the ocean. When the AMOC gets weaker, the north-eastern Atlantic Ocean cools and parts of the western Atlantic get warmer by a specific amount. We can look for this pattern in past records of ocean temperature to trace what the circulation was like in the past.

Another study in the same issue of Nature, led by researchers at the University of Potsdam in Germany, used historical observations of temperature to check the fingerprint. They found that the AMOC had reduced in strength by around 15% since 1950, pointing to the role of human-made greenhouse gas emissions as the primary cause.

In our paper, which also forms part of the EU ATLAS project, we found the same fingerprint. But instead of using historical observations we used our expertise in past climate research to go back much further in time. We did this by combining known records of the remains of tiny marine creatures found in deep-sea mud. Temperature can be worked out by looking at the amounts of different species and the chemical compositions of their skeletons.

We were also able to directly measure the past deep ocean current speeds by looking at the mud itself. Larger grains of mud imply faster currents, while smaller grains mean the currents were weaker. Both techniques point to a weakening of the AMOC since about 1850, again by about 15% to 20%. Importantly, the modern weakening is very different to anything seen over the last 1600 years, pointing to a combination of natural and human drivers.

The difference in timing of the start of the AMOC weakening in the two studies will require more scientific attention. Despite this difference, both of the new studies raise important questions regarding whether climate models simulate the historical changes in ocean circulation, and whether we need to revisit some of our future projections.

However, each additional long record makes it easier to evaluate how well the models simulate this key element of the climate system. In fact, evaluating models against these long records may be a crucial step if we hope to accurately predict possible extreme AMOC events and their climate impacts.