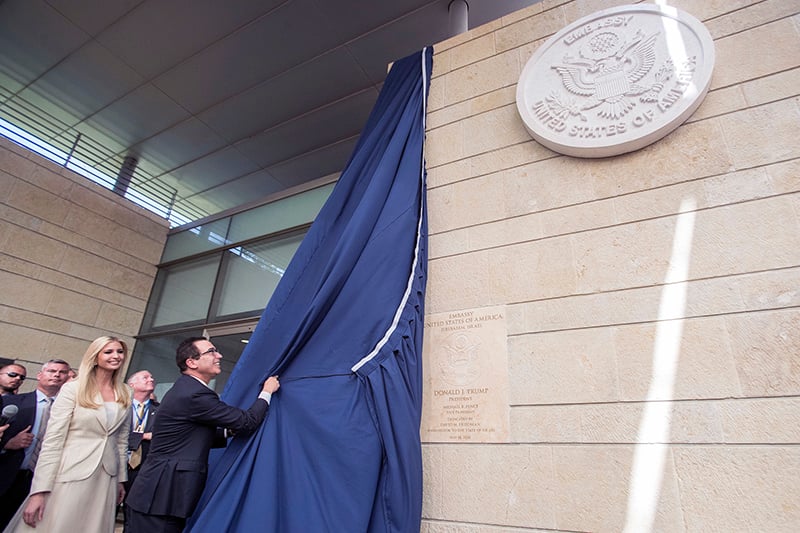 JERUSALEM (RNS) — When American and Israeli officials inaugurated the first-ever U.S. Embassy in Jerusalem Monday (May 14) in a festive red, white and blue ceremony, more than 100 evangelical Christians, including former U.S. congresswoman Michele Bachmann, were on hand.

So were scores of American Jews, including Jared Kushner and Ivanka Trump, many of them Orthodox.

President Trump’s December 2017 decision to move the embassy from Tel Aviv to Jerusalem has spurred criticism from those who believe the decision will impede a broader peace settlement in the Middle East by denying Palestinian claims to the city. It has also brought fears of increased violence. (As of this writing, at least 58 Palestinian deaths have been reported along Israel’s border with Gaza in protests against the embassy’s relocation.) 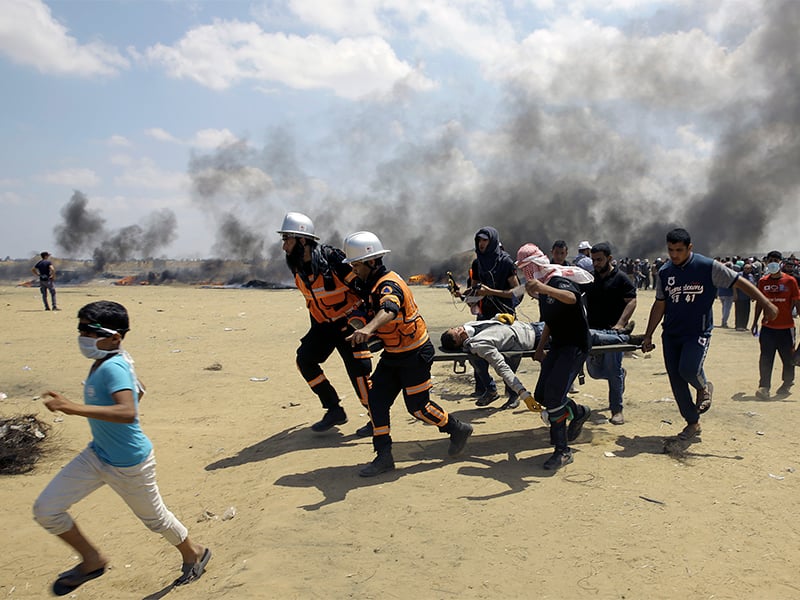 But for some evangelical Christians and Orthodox Jews, the embassy’s relocation is not only a smart political move but a fulfillment of divine prophecy.

“We see the embassy as crucial to God’s timing to bring about the revelation of the messiah,” the Rev. David Swaggerty, the leader of CharismaLife Ministries in Columbus, Ohio, said following a joint Christian-Jewish Bible study session hosted at the Israeli parliament the day before the embassy ceremony.

“For evangelical Christians the embassy move is part of eschatology,” the expectation of what will transpire at the end of times,” explained Rabbi David Rosen, director of the American Jewish Committee‘s Department of Interreligious Affairs. “The return of the Jewish people to their ancestral homeland and the reestablishment of Jewish sovereignty in Jerusalem is seen as a stage ultimately leading to the full messianic era.”

For religious Jews, too, moving the embassy from Tel Aviv represents a step toward redemption and the coming of the messianic era. “Certainly, when the world’s most powerful nation establishes its embassy in our eternal capital, we see the further realization of the ancient prophecy of how we have come home to rejoice in this ancient city,” said Rabbi David Stav, founder of the Tzohar rabbinical organization in Israel. 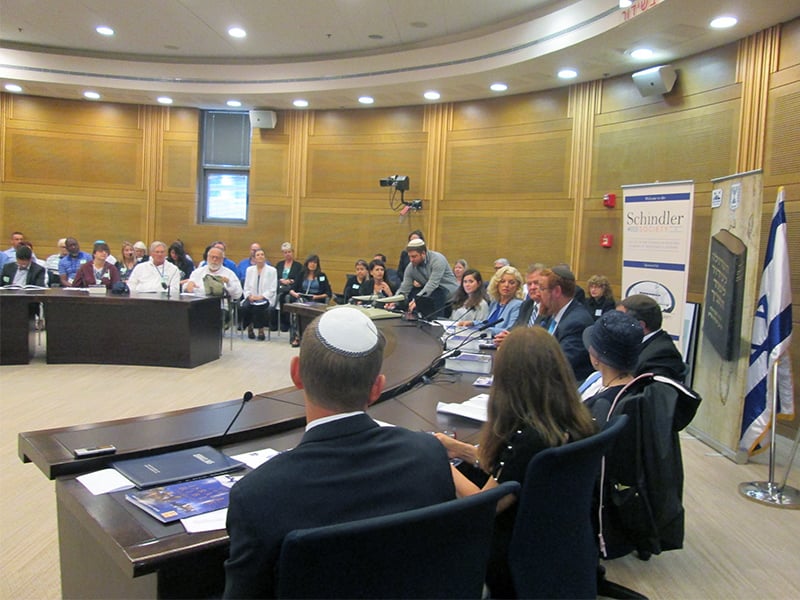 More than 150 Orthodox Jews and evangelical Christians studied the Hebrew Bible together in the Israeli parliament on May 13, 2018, a day before the opening of the U.S. Embassy in Jerusalem. RNS photo by Michele Chabin

A major difference between evangelical Christian hopes and Jewish views is timing. Some Christian believers think the final advent is just around the corner, Rosen pointed out, while Jews “recognize that it can take a long time before fruition.”

The time frame has not been an obstacle to shared joy over the embassy move, which has become the latest cause for celebration in a warming trend between the two faith groups over the past few decades.

Israel captured East Jerusalem during the 1967 Middle East war and annexed the disputed territory in 1980, but until December no nation had recognized Israeli sovereignty over any part of the city, which is holy to Jews, Christians and Muslims.

Tommy Waller, an evangelical Christian from Missouri, said his community began to reassess its relationship with the Jewish people after Israel was founded.

Tommy Waller, an evangelical Christian from Missouri, flew to Israel this week to take part in the opening of the U.S. Embassy in Jerusalem. RNS photo by Michele Chabin

“Until then we were still into replacement theology. We felt that God was punishing the Jews” for not accepting Jesus, he said in an interview at the Knesset, the Israel parliament. “And then Israel was established, exactly where God said it would be established. I see the hand of God in this and the relocation of the embassy.”

Waller is so convinced that Jews have the right to rule Jerusalem and to live in what was once the biblical land of Israel, that he founded Hayovel, an organization that trains Christians to become “positive ambassadors” for Jewish settlements in “Judea and Samaria,” biblical terms for the West Bank.

Swaggerty, the leader of CharismaLife Ministries, said his ministry helps fund the immigration of diaspora Jews to Israel — the ingathering of the Jews to Zion is also an integral part of biblical prophesy — without attempting to convert them to Christianity.

“Proselytizing is not in our vocabulary,” the pastor said emphatically, lest anyone get the idea that his motivation is to convert Jews to Christianity.

Rabbi Yechiel Eckstein, founder of the International Fellowship of Christians and Jews, an organization that seeks to deepen the bonds between evangelical Christians and the Jewish people, said that many Orthodox Jews and evangelical supporters of Israel share a “common spiritual base.”

Once Christians discover the Jewish roots of their Christian faith, Eckstein said, they become eager to reach out to Jews and, often, seek forgiveness for Christian-led persecution.

“For 2,000 years Christians were our enemies. Today we realize that Christians are our best friends. We are all happy about the embassy’s move to Jerusalem,” Eckstein said.

Which is not to say that all religious leaders are rejoicing at the embassy move. The vast majority of Holy Land Christians identify as Palestinians, according to the Pew Research Center, and, like their Muslim counterparts, want East Jerusalem to be the capital of a future Palestinian state.

In a Dec. 6 letter to President Trump, leaders of local Holy Land churches, from Catholic and Orthodox to evangelical, pleaded with the president not to relocate the embassy.

“We are certain that such steps will yield increased hatred, conflict, violence and suffering in Jerusalem and the Holy Land, moving us farther from the goal of unity and deeper toward destructive division,” the leaders said.

The ties between Christians and Jews at the end of the Bible lesson at the Knesset, however, could not have been stronger. Bachmann, the former congresswoman, asked for “forgiveness from the Jewish people for the horrible and arrogant way Christians — myself included — treated and regarded the Jewish people. … I apologize profoundly and ask forgiveness from the Almighty God that these statements brought pain.”

“It has shown me how ignorant I am. I didn’t come here with the answers,” Bachmann told RNS.

Concluding the Knesset event, Rabbi Tuly Weisz, noted how much Christian-Jewish dialog and mutual respect has grown since Israel’s founding.

“We are walking on a tight bridge and trying to change it into an eight-lane highway. We are in the golden age of Jewish-Christian relations,” Weisz said.