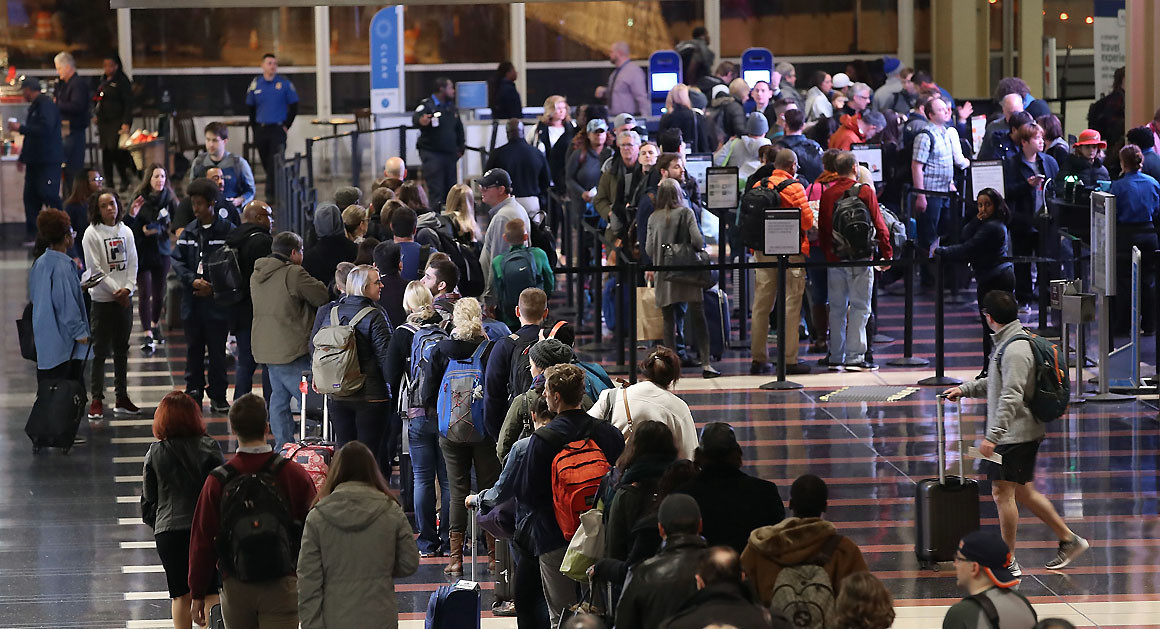 The Transportation Security Administration has bad news for tens of millions of Thanksgiving holiday travelers: Lines at airports may be even longer than usual as the agency tries once again to plug security holes in its baggage screening.

TSA is scrambling to respond to yet another damning investigation of its screening effectiveness, for the second time in little more than two years. And the agency is already phasing in revised security procedures — including those for passengers’ electronic devices — that could cause “a slight increase in wait times,” new TSA Administrator David Pekoske said in an interview.

“The procedure is new,” Pekoske said. “It’s new to passengers. It’s somewhat new to our screeners.”

The additional delays may not be as horrendous as the hourslong queues that left many passengers stranded at airports in the summer of 2016, a year after TSA leaders launched a crash course in security improvements in response to a previous failing grade from its inspector general.

But Pekoske said travelers could experience some of the longest wait times of the year on Sunday when many return home from the holiday. TSA has projected that more than 2.6 million passengers and airline crew members will be screened on Sunday alone, potentially making it one of the agency’s top five busiest days ever.

The squeeze is the latest example of a predicament TSA has faced since its creation in 2001: trying to balance effective security with the need to move travelers efficiently through checkpoints. Obama-era TSA chief Peter Neffenger said the agency has spent almost all of its short lifespan fighting for the resources it needs — but when he reviewed what caused the poor performance in the 2015 audit, he found a “disproportionate emphasis on efficiency over effectiveness.”

“There was a lot of pressure, we thought, on the checkpoint agents to keep people moving,” he said. “We also found that we didn’t have as consistent and coordinated of a training system as I would have liked to have seen.”

Neffenger added that he had hoped that TSA’s performance would have improved by now.

Most details of the latest IG audit, released Sept. 27, are classified, but media reports indicate that TSA failed somewhere between 70 percent and 80 percent of covert tests, allowing fake explosives, firearms and other prohibited items to slip through undetected. That’s only slightly better than the 95 percent failure rate that TSA suffered in its 2015 audit by the IG.

House Homeland Security Chairman Mike McCaul (R-Texas) said he was “disturbed” by the findings and urged TSA to quickly remedy the situation. “America’s enemies only have to be right once, but we have to be right 100 percent of the time,” he said at a Nov. 8 hearing.

Bennie Thompson of Mississippi, the committee’s top Democrat, told POLITICO that not only were the findings from this latest IG report “hair raising,” they also showed little improvement since the 2015 audit.

Even before the results of the new investigation were made public, TSA had ordered new procedures that will require travelers to remove any electronics larger than a cellphone from their carry-on bags and place them in a separate bin for scanning. Pekoske said TSA is partially relying on these changes to help shore up gaps revealed by the most recent audit, in addition to improving workforce training so that it’s more consistent and deploying new screening technology at airports.

TSA began phasing in the procedures nationwide this fall after testing them at 10 airports. They are now in effect at airports in Arizona, Maryland, New Mexico, New York and Virginia, among other areas. They will eventually be implemented at all U.S. airports.

“We look for windows of time where we can begin to phase [in] the implementation at airports across the country, and a window of time is between the end of the summer travel season and the beginning of the holiday travel season,” Pekoske said. “We’ve found that that process [in total] will have, in the long term, a negligible impact on passenger wait times.”

Passengers will be watching to see whether this iteration of TSA’s improvement plan results in the same kind of travel headaches as when the Obama administration responded to the last audit failure by ordering an increase in bomb-sniffing dog teams, hand-wanding of passengers and random bag checks, among other things. The demands of that combined with an uptick in air travel overwhelmed the agency’s slim staff, resulting in long lines, missed flights and lots of unhappy passengers.

Pekoske has, so far, not suggested a return to that type of manpower-centric approach. In fact, he has been a steadfast supporter of President Donald Trump’s fiscal 2018 budget proposal, which would slash funding for TSA’s canine teams, called VIPR, and eliminate a grant program that reimburses airports that hire local law enforcement.

Rather, Pekoske’s approach seems to be continuing with the technology initiatives that have been underway for the past two years. And that’s the element of his plan that seems to interest Congress the most.

McCaul, for example, wants TSA to pivot to outfitting all U.S. airports with 3-D X-ray machines, known as computed tomography scanners, at every airport security checkpoint in the U.S. as soon as possible.

TSA is piloting CT scanners at several airports and expects to complete the pilot by next summer. Pekoske has warned that rushing the agency to move any faster than that could be risky, given the potential for glitches.

Neffenger said Congress may think TSA has been moving slowly to adopt new technologies, but he noted that his Innovation Task Force began brainstorming with industry on how to develop CT scanners small enough to fit at checkpoints following the IG’s 2015 investigation. He said it took about a year and a half just to design a downsized version of the “huge” machines used for checked bags, without losing their effectiveness.

“They moved pretty quickly, I thought,” he said.

Neffenger added that while he thinks Congress understands the need for technology, lawmakers should also provide TSA with a steady and predictable funding stream for technology development. It’s also important that TSA has a clear research and development plan that drives industry to create the technology that it needs, he said. The fact that the IG continues to identify vulnerabilities points to the continuing need to evolve security checkpoints, he said.

Still, some think TSA could pick up the pace. Compared with other agencies like Customs and Border Protection, TSA’s adoption of automated technologies has been slow, said James Benjamin Hutchinson, a senior director at NEC Corp. America. NEC is working with CBP to stand up a national entry and exit system that would track international travelers using facial recognition technology.

“TSA is somewhat slower to the game than a lot of these other agencies,” he said. “I think working more closely — not that they haven’t been — working a little more closely with the stakeholder community, with the airports and the airlines to accelerate their adoption and implementation of the technology — I think that’s going to be helpful.”

And with air travel continuing to rise to record highs, airline and travel groups are just as keen to see TSA come up with a plan to improve security procedures without creating checkpoint logjams.

A spokesman for the trade group Airlines for America said the organization is coordinating with TSA to “determine the most effective and efficient way to maintain the highest level of security for the traveling public.”

The Global Business Travel Association said improved workforce training is critical to improving TSA’s airport security performance. Agents need to constantly evaluate circumstances on the ground and look for behavioral cues that could alert them to threats, said association Executive Director Michael McCormick. “That is the biggest way to combat security threats on site,” he said. “Technology doesn’t solve everything. It’s an enabler.”

He said the association would also like to see TSA increase enrollment for PreCheck and other “trusted traveler” programs to help narrow the pool of potential “bad actors.”