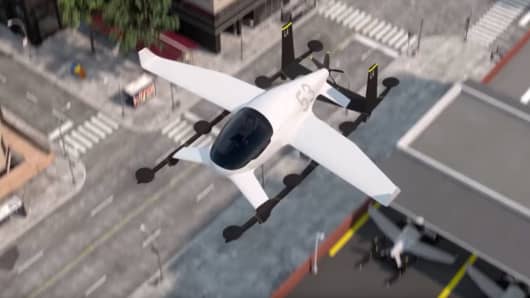 Uber signed a deal with NASA Wednesday to help develop traffic systems for its flying car project which it hopes to start testing in 2020.

The ride-hailing service published details of its “on demand aviation” ambitions last year which it has called Uber Elevate.

It is now stepping up its efforts to make the project a reality. Uber said at the Web Summit tech conference in Lisbon that it signed a Space Act Agreement with NASA for the development of “unmanned traffic management.” This is NASA’s push to figure out how unmanned aerial systems (UAS), such as drones that fly at a low altitude, can operate safely.

Uber wants to make vertical take-off and landing vehicles. That will allow their flying cars to take off and land vertically. They will fly at a low altitude.

This is the start-up’s first partnership with a U.S. federal government agency. NASA is also working with other companies to develop traffic management for these low altitude vehicles.

“UberAir will be performing far more flights on a daily basis than it has ever been done before. Doing this safely and efficiently is going to require a foundational change in airspace management technologies,” Jeff Holden, chief product officer at Uber, said in a statement on Wednesday.

“Combining Uber’s software engineering expertise with NASA’s decades of airspace experience to tackle this is a crucial step forward for Uber Elevate.”

The NASA deal is the latest in a series of partnerships Uber has struck to get UberAir — which is what the new service is called — off the ground.

Earlier this year it said it was working with authorities in Dallas-Fort Worth and Dubai to bring its flying taxis to those cities. It also signed partnerships with aircraft manufacturers and real estate companies to figure out where the take off and landing sites for the flying cars could be.

Uber said Wednesday that it also plans to trial the project in Los Angeles in 2020 along with the already announced cities. The company expects the price of a trip to be competitive with the same journey if done using UberX. It is aiming to get the flying taxi service up before the 2028 Olympics in Los Angeles.