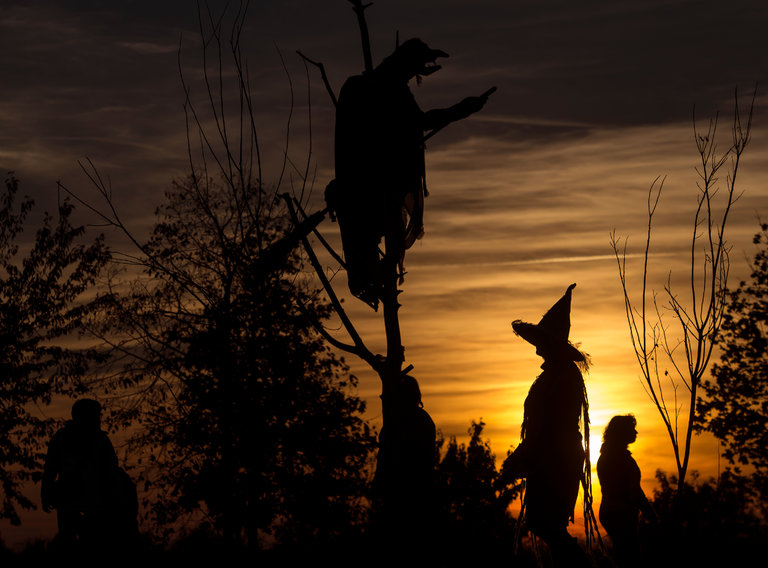 On a Wednesday evening last week, I sat in on a class called “Witchcraft 101: Curses, Hexes and Jinxes,” at Catland, a fashionable occult boutique in Bushwick, Brooklyn. More than a dozen people, most of them young women, sat in folding chairs in the store’s black-walled event space. The instructor was one of Catland’s co-owners, Dakota Bracciale, a charismatic, foul-mouthed 28-year-old former M.A.C. makeup artist dressed in flowing black, with a beard and long, lavender nails.

“If you’re not ready to admit that the universe is chaos, I’m not sure how far you’re going to go,” Bracciale said to the class, describing witchcraft as a way to exercise power in a world without transcendent moral rules, a supernatural technology for taking care of yourself when no one else will. Witchcraft, Bracciale said, lets you be the “arbiter of your own justice.”

I suspect that this assumption of chaos — the sense that institutions have failed and no one is in charge — helps explain the well-documented resurgence of occultism among millennials. Attempts at spell-casting are obviously not unique to today’s young people; the Washington writer and hostess Sally Quinn just published a book in which she boasts about hexing the renowned magazine editor Clay Felker, my former journalism professor, before his death from cancer. Still, magic and witchcraft have a renewed cachet, one that seems related to our current climate of political and cultural breakdown.

“Witches are everywhere these days,” says the introduction to “Basic Witches,” a cheeky how-to book about witchcraft published in August. At Catland, along with candles, pheasant feet and little jars of mouse bones, you can buy the beautifully produced feminist witchcraft magazine Sabat, whose covers feature black-and-white photos of gorgeous girls looking like pensive pop stars. There are a surprising number of magical paraphernalia subscription boxes. “Why the Witch Is the Pop-Culture Heroine We Need Right Now,” said the headline of a recent piece on New York Magazine’s Vulture site, part of its Witch Week Halloween series.

Some of this vogue is about witch-as-metaphor, an icon that captures the boiling rage and determined independence of legions of nasty women. But some of it is a real, if eclectic, spiritual practice, adopted by people skeptical of organized religion but unfulfilled by atheism. It’s these sincere attempts to use magic that interest me, because occultism often gains currency during times of social crisis.

Bracciale, who uses the gender-neutral pronouns they and them, grew up in an evangelical household — somewhere “between ‘Jesus Camp’ and snake handlers” — and said that the new atheism of Richard Dawkins and Christopher Hitchens had a profound effect on their generation. But atheism wasn’t enough, said Bracciale: “It left this huge vacuum, and that vacuum had to be filled with something.”

This is a familiar pattern. Theosophy, the mother of all new age movements, was founded in the 19th century as the discoveries of Charles Darwin undermined faith in Christian creation stories, which led some to abandon religion altogether but others to embrace new forms of mysticism. The rise of occultism among the counterculture of the 1960s and ’70s befuddled scholars who assumed that American society was moving toward ever-greater secularism. The dominant sociological model of the time, a University of Chicago professor wrote in 1970, “cannot cope with the new manifestations of the sacred on the college campus and in the communes where the collegians go when they flee from the campus.”

Today, too, technocratic rationality is losing its hold. Though youth culture occultism predates Donald Trump’s presidency, Bracciale believes the calamity of the election accelerated interest in witchcraft. Witchcraft itself has certainly gotten political. Every month, thousands of witches, neo-pagans and other magic practitioners virtually join together to cast a binding spell on Trump: “So that he may fail utterly. That he may do no harm.” (The pop star Lana Del Rey has participated.)

“When a big crisis is happening, then maybe you feel powerless to do anything through whatever tangible means are available to you,” Jaya Saxena, one of the co-authors of “Basic Witches,” told me. “You’re not a politician. Maybe you don’t have a ton of money. You’re not in control of all this stuff that ends up very much affecting you, and you look for ways in your individual life to change that.”

Catland has held three packed ceremonies to hex Trump, which involve the use of “cursing ingredients” as well as the recitation of Psalm 109: “Let his days be few, and let another take his office. Let his children be fatherless, and his wife a widow. Let his children be continually vagabonds, and beg; let them seek their bread also from their desolate places.”

It might seem strange for people who reject monotheism to chant Bible verses, but Bracciale often uses the Book of Psalms as a spellbook. (Wary of cultural appropriation, some of today’s young occultists look for esoteric strains in their own cultures rather than borrowing from foreign traditions.) Bracciale notes, savoring the irony, that for eight years, some Christian prayer warriors used the same imprecatory psalm against Obama. “They just use thoughts and prayers, and we know what those are worth,” Bracciale said with contempt. “With us, there’s structure around it, there is a methodology behind it.”

For decades now, the right has spiritualized political warfare, treating it as a metaphysical contest between good and evil. It’s not surprising that the rise of Trump, a person who for many represents the inversion of all decent values, would create a supernatural reaction on the left. Millennial occultists might seem silly to outsiders, but you don’t have to believe in hexes, witchcraft or magic to take them seriously as a sign that many people find the present intolerable. Just under the surface of American culture, something furious is brewing.

Read More:Rapper Azealia Banks ‘Real Witches Do Real Things’ After Instagramming Herself Cleaning Grotesque Closet Where She Claims She Sacrificed Chickens For Years