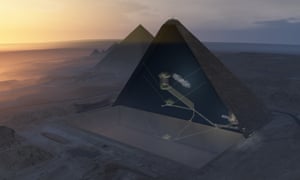 Archaeologists have uncovered a mysterious enclosure hidden deep inside the Great Pyramid of Giza, the oldest of the seven wonders of the ancient world.

The massive cavity stretches for at least 30 metres and lies above the grand gallery, an impressive ascending corridor that connects the Queen’s chamber to the King’s in the heart of the historic monument. It is the first major structure found in the pyramid since the 19th century.

It is unclear whether the void is a chamber or a corridor, or whether it played any more than a structural role in the pyramid’s construction – such as relieving weight on the grand gallery below. But measurements show that it has similar dimensions to the grand gallery, which is nearly 50 metres long, eight metres high and more than a metre wide.

Scientists discovered the void using sensors that detect particles known as muons, which rain down on Earth when cosmic rays slam into atoms in the upper atmosphere. The muons travel at close to the speed of light and behave much like x-rays when they meet objects. Armed with suitable equipment, researchers can used them to reveal the rough internal structure of pyramids and other ancient monuments.

“We know that this big void has the same characteristics as the grand gallery,” said Mehdi Tayoubi at the HIP Institute in Paris, a non-profit organisation that draws on new technology to study and preserve cultural heritage. “It’s really impressive.” 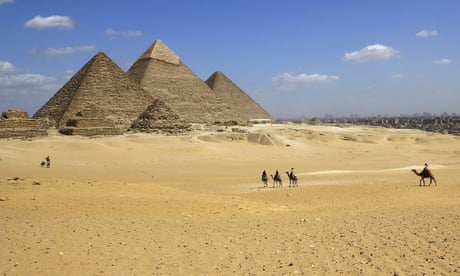 Tomb raiders: what treasures could lurk inside Egypt’s lost chambers?

Also known as Khufu’s Pyramid, or the Pyramid of Cheops, the Great Pyramid was built in the 4th dynasty by the pharaoh Khufu, who reigned from 2509 to 2483 BC. The monument rises 140 metres above the Giza Plateau and has three chambers known from previous explorations: a subterranean one at the base of the pyramid, the Queen’s chamber at the centre, and the King’s chamber above. While a granite sarcophagus sits in the King’s chamber, King Khufu’s mummy is missing, and his queens were buried elsewhere. Whatever riches were once in the chambers were looted long ago.

Egyptologists have scores of theories about how the pyramid was built, but there are no reliable accounts of its construction. Herodotus wrote of stones being drawn from quarries near and far, with some being shipped down the Nile on boats. The mammoth construction project occupied the lives of a hundred thousand men, fuelled in part by radishes, onions and leeks, he noted.

To pinpoint the cavity, scientists from Nagoya University in Japan, and KEK, the country’s high energy physics lab, installed muon-detecting photographic plates and electronic muon detectors around the Queen’s chamber. At the same time, researchers from CEA, France’s energy research organisation, trained “muon telescopes” on the pyramid from the outside. All three techniques can tell from which direction incoming muons arrive.

When the teams compared their results, all had found a muon hotspot in the same place, indicating the presence of a large cavity in the pyramid. While most of the monument is made of stone that absorbs muons, chambers and cavities let the particles pass through.

Muon analysis allows scientists to look deep inside ancient monuments without drilling holes or causing other damage to the precious structures. But the technique produces low resolution images, making it impossible for the researchers to tell if the newly-found void runs horizontally or parallel to the grand gallery. Nor can they be sure it is a single enclosure rather than a series of smaller cavities close together, they report in Nature.

“What we are sure about is that this big void is there, that it is impressive, and was not expected by any kind of theory,” said Mehdi. To shed more light on the purpose of the cavity, Mehdi called on specialists in ancient Egyptian architecture to come forward with ideas of what it may be so they can be modelled and checked against the team’s data. The cavity may have relieved weight on the roof of the underlying grand gallery, or be a hitherto unknown corridor in the pyramid. The team has no plans to drill into the cavity to explore inside, but they are developing a tiny flying robot that might one day be sent in, if the Egyptian authorities approve.

“It’s a tribute to humankind,” said Mehdi of the pyramid. “It asks a question about what is our future. If they have been able to do this with the means they had 4,000 or 5,000 years ago and they left this heritage today, what will our own society leave for future generations?”

Peter Der Manuelian, professor of Egyptology and director of the Harvard Semitic Museum, said the discovery was “potentially a major contribution to our knowledge about the Great Pyramid.”

“I’m sure there are imperfections and perhaps small voids or cavities in several locations in the pyramid. What makes this one so interesting is the size, seeming to rival the grand gallery itself in scale,” he said.

“The muons can’t tell us about chambers, form, size, or any possible objects, so it’s far too early to speculate. I know most people want to know about hidden chambers, grave goods, and the missing mummy of King Khufu. None of that is on the table at this point. But the fact that this void is so large warrants further non-invasive exploration,” he added.

In 2011, Rob Richardson, a researcher at the University of Leeds, sent a small snake-like robot into one of the tunnels of the Great Pyramid and took pictures of hieroglyphs that had not been seen for 4,500 years. “I think people assume that all these mysteries of what’s in our world are known but there are still places like the pyramids where we simply don’t know,” he said. “The pyramids have been there for thousands of years and we still don’t know exactly why they are there, what they were used for, or how they were built.”