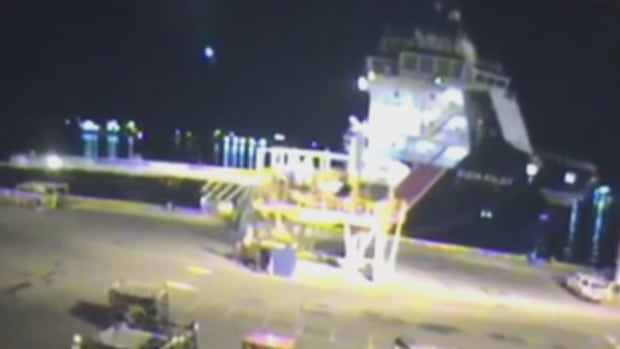 Andrew Wilkins was eating dinner at a downtown St. John’s pub, looking out over the city’s iconic harbour, when a flash of green light caught his attention.

“The whole sky just lit up,” he said. “It was coming in on a 45 degree angle, coming down to the right.”

Wilkins stopped eating and stared as the moving ball of light crashed down on the opposite side of the harbour, towards the largely uninhabited Southside Hills area.

He paused to determine if he could hear a crash, but the noisy chatter of the busy pub prevented him from hearing any sound the flash of light may have made.

“It was like a big green ball of fire, is what it looked like. At first I thought, ‘Wow, geez, that’s a really bright firework,’ but fireworks don’t shoot downwards.”

Across town, Krista Godfrey was sitting in her living room and gazing out the window at her view of the city.

“I can, on a good day, kind of see Signal Hill,” she said, describing her vantage point.

But on Monday evening, she saw something totally different.

“We often have planes coming at us, so light frequently catches my eye,” she said. “I just happened to see something and at first I thought it was a firework … But then I realized it was going down and not coming up like a firework.”

Her mind immediately drifted to a news article she had see last week, talking about how the Orionid meteor shower is expected to peak this past weekend.

The Orionids are the largest meteor shower associated with Halley’s Comet, usually appearing for one week in late October. The shower can come with a cluster of 50-70 meteorites per hour at peak times.

“[It was] certainly the biggest thing I’d ever seen in terms of a meteor or meteorite,” Godfrey said. “I kept waiting to see if there would be a boom coming with it. But nothing happened.”

A camera near the waterfront captured the moment the light streaked down over the harbour sky. From its vantage point, the light appears to end with a flash just beyond the hills.

The Royal Newfoundland Constabulary said it had fielded calls of a mysterious light crashing near the harbour, but there have been no reports of fire or injury.

Whatever it was, Andrew Wilkins is ecstatic to have seen its final moments before disappearing.

“It was pretty wild. I’ve seen meteor showers and stuff before, but I’ve never seen something so bright make it so close to earth … This looked like it may have actually made contact with earth.”

Read More:Another EXTREMELY Bright Fireball In The Skies, This Time In France