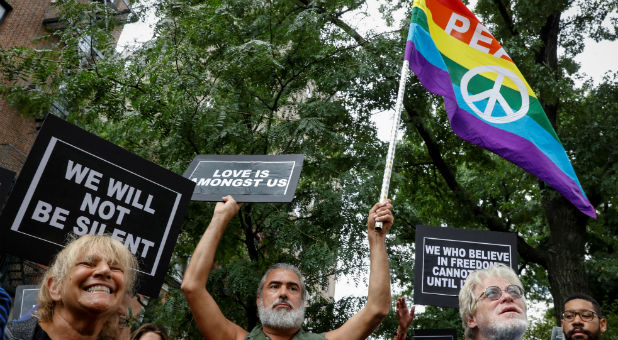 I recently spoke at a community college in Southern California, demonstrating that faith and science are not at odds. In posts leading up to the event, I was labeled a “hate pastor” as LGBT activists protested the event. Sadly, due to escalating campus protests across America, a number of sheriff deputies were on stand-by.

My wife and I were perplexed—when did a message of love become a message of hate? We love the LGBT community, and I wasn’t talking about this issue that evening. When my wife approached them, she was attacked verbally—from profanity to sexual innuendos.

Ironically, those who promote tolerance are often intolerant of those who disagree.

This experience, as well as an upcoming appearance on Fox News.com with Lauren Green to debate a pastor who supports homosexuality, prompted me to define the misunderstandings.

1. Tolerance “tolerates” differences; love embraces regardless of differences. In 2016, I received a call from a concerned sister whose brother was suicidal. The following day, I had the privilege of visiting him, a male prostitute, in North Hollywood. I spent two hours sharing God’s love, my prodigal story and hope in Christ. I left him feeling hopeful and encouraged.

A month later, I received a call that he had died in his sleep, possibly from complications of pneumonia. Just prior to his death, he told his family that he was reading my book, Desperate for More of God. Tolerance would not have motivated me to drive three hours round-trip, but love did. The message from his memorial is here. Judge for yourself—love or hate.

2. Challenging those with whom we disagree is often a characteristic of love, not hate. Parents confront, challenge and admonish daily. They don’t hate their children. Doctors and therapists challenge lifestyles that are high risk to help their patients. The reason it’s being labeled hate speech is to silence the messenger. In short, they don’t want to hear.

3. The Creator made His plan obvious. Jesus said that since the beginning of creation, God created them male and female in order that they would be joined together and become one flesh—to be fruitful and to multiply. He adds, “What therefore God has joined together, let not man put asunder” (Mark 10:9). Males and females were created purposely and are complementary by design.

4. The exceptions prove there is a rule. The question arises, “But not all married couples can have children; thus is procreation unnecessary? True, but this fact does not support homosexuality. Some are unable to conceive, and some have no desire for marriage or sex—exceptions do not void the rule. 1 Corinthians 7:2 is very clear that each man should have his own wife and each woman her own husband.

5. There is no scriptural support for homosexuality. Some argue, “The Bible is not an ethical textbook—culture changes and so does truth.” Not so. Not one moral law that God gave is obsolete, from adultery to fornication to homosexuality. Things that were harmful then are harmful now. They are never painted in a positive light. They caused deep pain then as they do now. Some have even suggested that Naomi and Ruth and Jonathan and David had same-sex relationships. This gives the phrase “grasping for the wind” new meaning. This is exegesis in its purest form—reading things into the text that are not there.

Some parents change their view when they find their son or daughter in an LGBT lifestyle; confused, they “accept” the lifestyle, but feelings are not a gauge for truth. Instead, offer hope and remind them that we all struggle with something. If a child sins in the area of anger, infidelity or addiction, we don’t change the Scriptures to fit their behavior; we offer hope in the midst of the struggle. Why should homosexuality or transgenderism be any different? No matter how many laws are passed in favor of gay marriage, it will not change God’s mind. Times change; truth does not.

6. The Bible is crystal-clear on the issue of sexual sin. As a famous teacher once said of the Bible, “If the plain sense makes good sense seek no other sense lest it result in nonsense.” I cringe every time I hear misguided statements in an attempt to support homosexuality, such as misinterpreting “abandoning natural relations” in Romans 1:26-28. Or that the sin of Sodom and Gomorrah was only neglecting the poor. Or that Corinthians is outdated and Leviticus is talking about rape. Indeed, neglecting the poor is/was a sin, but it was not the only sin. In addition to rampant homosexuality, they were drunkards, gluttons, covetous, profane and wicked. The context of Sodom and Gomorrah’s destruction was much more than neglecting the poor: “they were haughty and committed abominations.” (See Ezekiel 16 and Jude 1:5-8.) Additionally, early church fathers, as well as creeds and confessions and Reformers, all echoed the same truth.

7. God can advise against eating shellfish as well as homosexuality. Although the dietary laws of the Old Testament do not apply today, they are still beneficial. For example, we now know why things like pork and shellfish were forbidden—they are unhealthy. God’s wisdom is sound and purposeful in guiding relationships as well. Leviticus 20:13 states, “If a man lies with a male as he lies with a woman, both of them have committed an abomination …” Romans 1:24-26 says that homosexuality dishonors the body—an exchange of the truth for a lie takes place and they worship the creature rather than the Creator: “For this reason God gave them up to vile passions. For even their women exchanged the natural use for what is against nature (Rom. 1:26).

To suggest that these verses are invalid today because God also said to avoid shellfish or because it was the culture back then, is erroneous. I can tell my son not to place his feet on the table, and in the same sentence tell him not to play in the street—both “do not’s” are true even though the consequences differ.

8. The mocking tones of most pastors who support homosexuality speak volumes. A movement that truly is of God is undergirded with humility; words are seasoned with grace. But the opposite is often true with pastors who distort truth. One well-known pastor chided fundamentalists, “They are not fun and they are mental.” How foolish—the term fundamentals comes from essays constructed around 1905 covering the “fundamentals” of the faith. He is actually mocking the foundation of the faith.

Another leader made a shocking statement, “Our greatest spiritual problem has not been sin, it’s been shame.” Confused? So was I. Shame comes from sin. Many of these Christian leaders who support gay marriage only speak to their cheerleaders—they mock anyone who does not agree. I think of Jeremiah 23 often—they are teachers who alter God’s Word, avoid the difficult truths and encourage sin. Granted, arrogance and anger happen on the other side as well, but we don’t accept that behavior from either camp.

9. “I was born this way,” is not an excuse. Although new biological and psychological evidence suggests that the idea of being born gay lacks scientific support, let’s assume that a person can be born gay. We were all born with a bent to lie, cheat, lust, indulge and deceive. In fact, pornography has been coined “every man’s battle.” But that doesn’t make it right; it makes us sinful and in desperate need of a Savior. The hearts of men can change, and they change daily through a relationship with Christ.

In closing, there will be a time when we stand before God to give an account. Some may say, “Lord, I anchored my life in Christ. I believed Your Word and based my life on it as best that I could.” Others will say, “Lord, you gave me a new perspective … a new truth. Although Scripture once said that homosexuality is sin, I don’t think that applies now.” Whose shoes would you rather be in?

“When we become so tolerant that we lead people into mental fog and spiritual darkness, we are not acting like Christians—we are acting like cowards” (A.W. Tozer). We are so worried about offending others, but have we stopped to consider that we may be offending God?

Read More:Guise Of Equality: Gay Activists Look To ‘Punish’ Christians Not Willing To Go Along With LGBT Agenda

Read More:This Is The World We Live In Now: US Christian’s Choice: Betray Faith Or Close Business