LONDON — Britain was hit by a terrorist attack on Friday morning, when a crude device exploded on a crowded London Underground train, injuring commuters, sowing panic, disrupting service and drawing a heavy response from armed police officers and emergency workers.

The device exploded at 8:20 a.m. on a District Line train leaving the Parsons Green station in Southwest London.

“This was a detonation of an improvised explosive device,” Assistant Commissioner Mark Rowley of the Metropolitan Police, a top counterterrorism official, said at a news conference. He urged anyone who had seen what happened, or had taken photos or videos of the bombing, to come forward.

The authorities immediately beefed up security around the transit system, as hundreds of police officers and detectives combed the scene for clues.

At least 22 people were hospitalized, several of whom had apparently been injured as panicked commuters fled. None had life-threatening injuries, and hospital officials described the victims as “walking wounded.”

“The train was packed, and I was down the other side of the carriage standing up, looking at my phone and then I heard a big boom and felt this heat on my face,” said Natalie Belford, 42, a hairdresser and beautician who was on the train. “I ran for my life, but there was no way out. The doors were full of people and the carriage was too packed to move down.”

A photo widely circulated on social media showed a white bucket inside a bag, with wires and flames coming out of it.

Passengers described seeing a wall of fire. One woman with burns was taken away on a stretcher, and several others were cut or bruised as panicked commuters fled the train and the elevated station.

The National Health Service said that 19 people had been taken to three hospitals and that another three had gone on their own.

It was the fifth major terrorist attack in Britain this year, following a vehicular and knife attack near Parliament in March, a suicide bombing at a rock concert in Manchester in May, and a van and knife attack around London Bridge and a van attack outside a London mosque, both in June.

Taken together, the terrorist violence has been the deadliest on British soil since July 7, 2005, when suicide bombers set off explosions on three subway cars and a double-decker bus in London, killing 52 people and injuring scores of others.

The new attack immediately revived concerns that militants might be targeting the Underground, commonly known as the Tube — the world’s oldest subway system and one of the busiest.

Prime Minister Theresa May returned to London from her constituency in Maidenhead, west of the capital, and summoned a meeting of the government’s emergency committee, known as Cobra, for the afternoon. Boris Johnson, the foreign secretary, appealed for calm.

The city’s mayor, Sadiq Khan, a face of resolve following the earlier attacks, issued a defiant statement on Facebook.

“Our city utterly condemns the hideous individuals who attempt to use terror to harm us and destroy our way of life,” Mr. Khan wrote. “As London has proven again and again, we will never be intimidated or defeated by terrorism.”

From the United States, President Trump weighed in on Twitter, saying the bombing was the act of a “loser terrorist.” He said that “sick and demented people” had been “in the sights of Scotland Yard,” but he did not elaborate on what he meant.

Ms. Belford, the hairdresser, said she was knocked over twice, and showed a reporter her ripped tights and bloodied knee.

“I knew it was a bomb when I saw people with charred hair and burned faces,” Ms. Belford said. “This has got to be terrorism — a bag full of explosive materials don’t just appear on a train by accident.”

Alex Ojeda-Sierra, 13, a pupil at the London Oratory School, was en route to school with a friend when he heard screaming from other carriages.

“I was on the train, about two carriages from the front, and I was talking with my friend and all of the sudden people started screaming and running,” he said in an interview at Chelsea and Westminster Hospital. “I dropped my bag and we started running. My friend was ahead by a meter. I tripped and he carried on running. One man fell on me and I had my legs bent backwards and my right ankle got twisted and I started screaming that I had no air.”

He had several bruises on his face.

Adam Davis, a 23-year-old student, said he was in the train car where the device exploded.

“I had my headphones on, then I felt a kind of vibration, followed by a wave of heat, and I looked down and the whole carriage was in flames,” he said. “I just got up and ran, but the carriage door was jammed with people. Everyone was screaming and trying to get out, people had blood on them everyone was pushing. It was like a stampede.”

He added: “I didn’t see any suspicious-looking people, or the bucket that’s on the media. I just saw flames and you think the worst. You think bomb. Terrorism.”

Felicity and Tom Reid said they were on their way to a funeral when the explosion went off on their train.

“We had planned to get a cab, but the traffic was so bad at that time we were worried we would be late,” Mrs. Reid said. “We weren’t in the carriage with the explosion, but we heard the bang and heard people screaming so we started running.”

She added: “You think of the worst: bombs, terrorists, shootings, stabbings. You think worse will follow and you just run for your life. We got lucky, but this is terrifying and a reminder it can happen anywhere. Nowhere is safe.”

Service on the District Line between Edgware Road and Wimbledon was suspended. The police said Londoners should expect to see more officers in public spaces through the weekend.

The Parsons Green station, which opened in 1880, is in Hammersmith and Fulham, an inner London borough that is home to several corporate headquarters and soccer clubs. 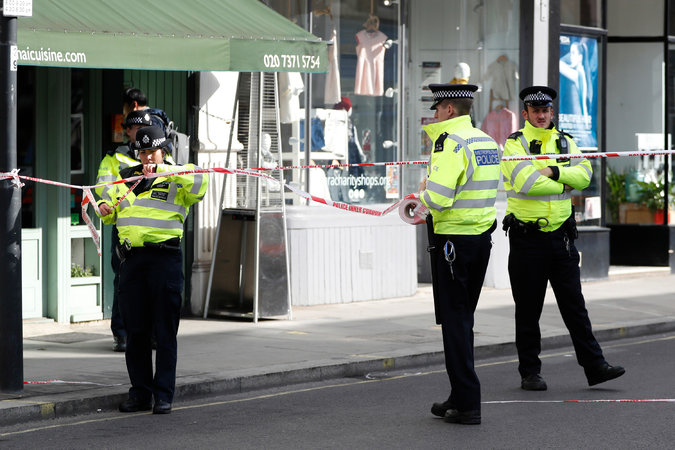 “I didn’t hear anything but I saw a big crowd of people running and screaming outside my window,” said one woman, Nita Alvi, who lives near the station. “I went to try and help, but everyone was running so fast. Some of them were holding their heads, some were limping. One older woman fell to the floor.”

Roy Ramm, a former commander of specialist operations at Scotland Yard, said that police would be undertaking a comprehensive forensic examination of the train and the device to determine what happened and whether there was an ongoing threat.

“The police will also ask witnesses the age-old question: Did anyone see what happened?” he said. “They will be investigating what the detonation mechanism was and going through CCTV footage to see who might be behind it.”

Mr. Ramm said the police would also be looking for any communications of a bomb threat before the attack, not just in the last 24 hours, but in recent weeks, and waiting to see if anyone claimed responsibility. As part of the investigation, he said, police would be working with security services to see if any terrorist cells or police targets under surveillance had been observed in the area.

“Parsons Green is not emblematic or symbolic, and I think that will be a puzzlement for investigating officers, who will ask: Was it intended to be detonated or did it go off there by accident?” he added. “If you look at a list of target areas in London, Parsons Green would not be in the top 100.”

Londoners turned to social media to offer tea, hugs, use of their toilets and even gin to people caught up in the attack.

Chelsea and Fulham Dentist, a practice close to the station, offered comfort food like cookies and the use of its power sockets. Hugh Coyne, a physician at a nearby medical practice, went to the scene to offer help to emergency workers.