ORLANDO, Fla. – Tropical Storm Irma is now a hurricane in the open Atlantic and is expected to strengthen into a category 4 storm as it treks west.

As of late Thursday morning, Irma was a category 2 storm packing sustained winds of 100 mph and was located more than 3,000 miles away from Florida. The storm is headed west toward the Leeward Islands.

“The American models take it to the Carolinas by next Sunday (Sept. 10). The European models have it going to Cuba and possibly threatening South Florida,” News 6 meteorologist Troy Bridges said. “It’s just too early to tell.”

As August ends, the tropics continue to heat up. Remember hurricane season peaks Sept. 10. On average about 35 percent of storms develop during the month of September, with a gradual decrease October and November. Not only does activity ramp up, but the strength of the storms also rise. One of the biggest factors being the warmer waters over the Atlantic, Caribbean Sea and the Gulf of Mexico.

Earlier this season the National Oceanic Atmospheric Association predicted an above average season. They expect up to 19 named storms, nine hurricanes and five becoming major hurricanes. So far this year nine named storms, four hurricanes, including Harvey, have developed.

Moving into the second half of the season, activity is expected to intensify quickly through the end of November. 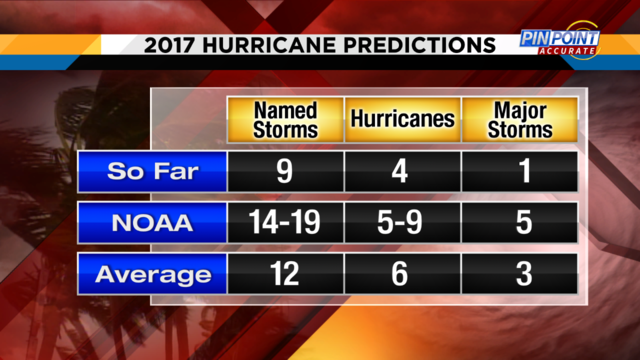 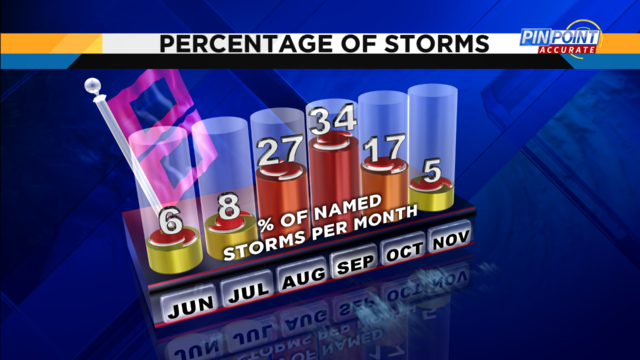 Dry conditions will lead to another very hot day in Central Florida, and all eyes remain on the tropics as questions linger about Tropical Storm Irma’s path.

“We are pinpointing drier air across Central Florida on Thursday, especially in the mid- and upper levels of the atmosphere,” News 6 meteorologist Troy Bridges said. “Like we saw on Wednesday, rain chances will be lower because of this drier air.”

Expect a 20 percent coverage of showers and storms through the afternoon.

Rain chances increase to 60 percent on Friday and Saturday.

By Sunday and Labor Day, the chance of rain will be 40 percent as sea breeze storms begin to fire up.

Thursday’s high in Orlando will reach 96, with a “feels like” temperature of 105. The average high on this date is 91.

“There was no official rainfall in Orlando on Wednesday, so our deficit is now at 8.12 inches since January 1,” Bridges said.

“We are watching Tropical Storm Irma in the open Atlantic, which has maximum sustained winds of 65 mph and is moving west at 12 mph,” Bridges said.

A new low in the Gulf will bring rain to Texas. Harvey weakens and moves North. #Irma will be a hurricane soon! pic.twitter.com/BWF8FeuaFs — Troy Bridges (@TroyNews6) August 31, 2017

#Irma will likely become a (major) cat 3 hurricane as it moves to the Lesser Antilles early next week! pic.twitter.com/QqeKyfn1sm — Troy Bridges (@TroyNews6) August 31, 2017

The latest track and many of the models take Irma to the Lesser Antilles as a category 3 hurricane with winds of 120 mph by the middle of next week.

“Long-range models are not in a great agreement,” Bridges said. “But some bring it into the Bahamas by the end of next week or next weekend. Some models keep it out to sea, but all of them show that the system will be a major hurricane in the coming days.”

Meanwhile, there is now a new area of low pressure in the western Gulf of Mexico.

The system has a 20 percent chance of development within the next five days.

“This low is gradually going to move north into areas of Texas over the next few days,” Bridges said. “Any additional rain the system will bring will only add some more flooding concerns for Texas.”

Harvey is now a tropical depression moving over land in Louisiana and eventually into Arkansas, Mississippi and Tennessee.

Harvey will continue to weaken as it moves over land, but it will bring rain across much of the middle of the country for the next few days.