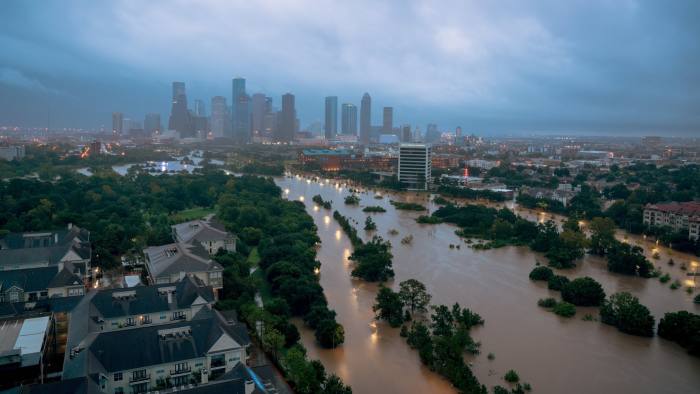 Houston, the capital of the US oil and gas industry, was hit by “catastrophic” flooding over the weekend as Tropical Storm Harvey caused torrential rains across southern Texas.

Harvey weakened from a Category 4 hurricane to a Category 1 tropical storm after making landfall near the port of Corpus Christi on Friday night, but brought heavy rain to Houston 150 miles away to the north-east.

The US National Hurricane Center warned that 50 inches of rain could fall in some areas, which would be “unprecedented”.

It said record flooding was expected in many parts of south-east Texas, creating a “life-threatening situation”, with heavy rain expected to continue until at least Wednesday.

More than 27 inches of rain fell in 24 hours in some areas, with 35 inches expected by Sunday evening, the weather service said. Southeast Texas holds one of the highest concentrations of energy infrastructure in the US, with refineries, chemicals plants, pipelines and terminals.

Houston is also one of the country’s busiest ports. ExxonMobil, the oil and gas group, said on Sunday morning that the flooding had led to “operational issues” at its Baytown refinery complex, adding that it was “in the process of a safe and systematic shutdown of operations”, while “taking all precautions to minimise the impact to the community and employees”.

Royal Dutch Shell also said it was starting “a controlled shut down” of its Deer Park refinery and chemical plant as a result of the rainfall and “nearby flooding”. It said only essential personnel would stay on the site until the end of the week.

The volume of rainfall had already reached the level of Tropical Storm Allison, which devastated Houston in 2001, the National Weather Service said, and it was still raining.

The Houston Chronicle reported that five people had died as a result of the flooding overnight, and police said at least 1,000 people had been rescued from the rising waters.

The National Hurricane Center warned people to expect flash floods in parts of south-east Houston, including the greater Houston area, and urged people not to travel in the affected area if they were in a safe place. Greg Abbott, the governor of Texas, told Fox News the storm was “bad news growing worse”.

Brock Long, the recently-appointed head of the Federal Emergency Management Agency, said on CNN the disaster was “going to be a landmark event”, and said the agency was “gearing up for the next couple of years” of work in Texas.

The storm is the first big natural disaster to hit the US since Donald Trump became president, and will be a test of the federal government’s ability to respond to complex challenges under the new administration. Houston has been growing rapidly in the past few decades.

The greater Houston metropolitan area has a population of about 6.9m, up 2.1m since Allison, which killed 23 and caused damage estimated at $5bn. As a result of the storm, 430,000 barrels per day of oil production in the the Gulf of Mexico was shut off, which is about 24 per cent of the region’s total output, according to S&P Global Platts.

About 900,000 barrels per day of oil refining capacity was also closed on Saturday. The ports of Corpus Christi and Houston, which are the principal oil export routes for the US, were both closed over the weekend, although Corpus Christi said on Sunday morning it was implementing its “initial post-storm recovery actions”.

Ercot, the Texas grid operator, said more than 300,000 customers were without power on Sunday morning, and warned that further outages were likely as the rain and flooding continued. Houston’s George Bush Intercontinental Airport suspended all flights, saying that roads to and from the airport were closed due to flooding.