The latest episode of Preacher, currently on season 2, has received a (probably entirely expected) backlash.

That’s after the show included a graphic sex scene depicting Jesus Christ having sex with a woman on the night of The Last Supper; though they’re shown in various positions only in silhouette, there’s a lot of pretty descriptive talk about what they’re doing.

Season 2’s second episode, “Dirty Little Secret”, continues Jesse Custer (Dominic Cooper)’s search for God, as he crosses paths with the Grail, an organisation attempting to keep one giant secret from the world: that Jesus spent the night before his crucifixion getting a woman pregnant, and spawning an earthly bloodline. 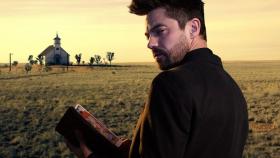 The episode also saw Custer meet Jesus’ 25th great-grandson, Humperdido, who promptly responded by peeing all over his face, with the Grail’s attempts to keep Jesus’ bloodline pure having unfortunately resulted in severe inbreeding.

“Depicting Jesus in a grotesque sex scene is an assault on the sensibilities of all Christians, as well as people of good will who are not Christians,” Catholic League president Bill Donohue said in a statement (via Fox News).

“We have been treated to this kind of fare from some pay-per-view channels, but we are not accustomed to AMC getting into the mud. If this is a signal of what it aspires to become, we will rally Christians against it.”

An article on ultra-conservative website NewsBusters also called the scene “embarrassingly crass” and “so, so, so wrong”, while labelling its writers “depraved”.

A reaction that’s most likely music to the ears of Preacher‘s creative team, with co-producer Seth Rogen simply tweeting: “If this isn’t a good endorsement of #Preacher, I don’t know what is.”

Read More:Satan Worship Continues To Gain Momentum, And The Main Stream Media Is Doing The Legwork