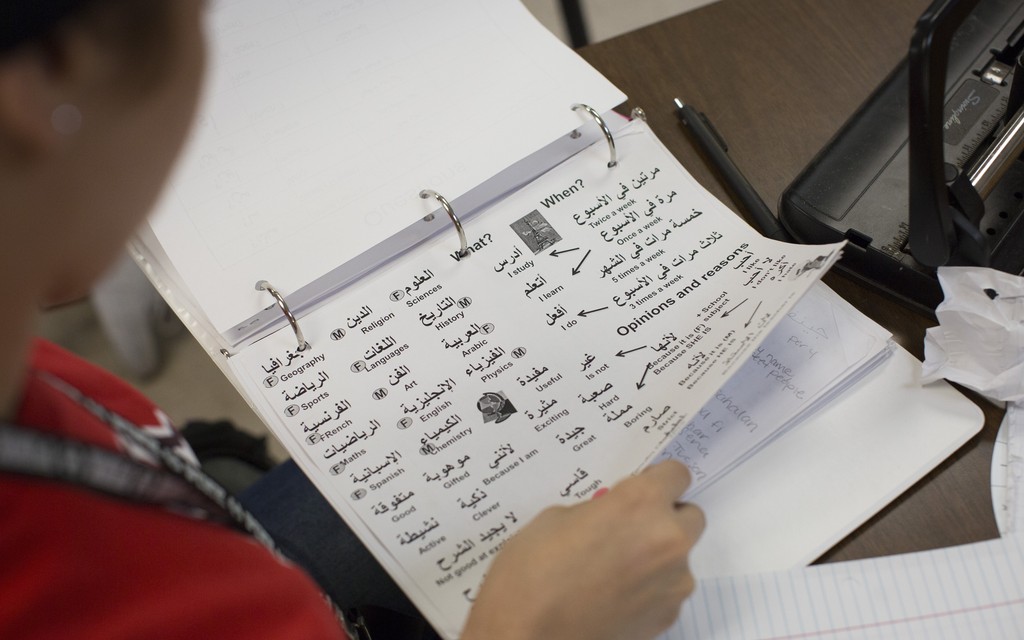 The Qatar Foundation has given $30.6 million over the past eight years to public schools and supporting initiatives across the U.S. A student shows her work in an intermediate Arabic class at Cholla High School in Tucson, Ariz., on Aug. 9. Photo: Caitlin O’Hara for The Wall Street Journal

U.S. public schools eager to expand their Arabic language offerings have been receiving funding from a foundation in Qatar, a country embroiled in an intensifying diplomatic standoff over its alleged ties to terrorism.

The Qatar Foundation gave $30.6 million over the past eight years to several dozen schools from New York to Oregon and supporting initiatives to create or encourage the growth of Arabic programs, including paying for teacher training, materials and salaries. The funding came through Qatar Foundation International, the foundation’s U.S. arm.

“We are going to definitely look at ways to expand in the future,” said Omran Hamad Al-Kuwari, executive director of the Qatar Foundation’s CEO office. “We’ve been quite surprised about the interest.”

Benefactors from foreign governments, including other Arab nations, have long made donations to American higher education, but the Qatar Foundation’s appears to be one of the few foreign organizations targeting K-12 public schools with lofty grants. It wants to ramp up spending. Still, the foundation’s donations remain well below those from some major American supporters of K-12 education, such as the Walton Family Foundation, which gave $190.9 million last year.

Several participating schools reached for comment lauded the foundation’s support. After Spanish, Arabic is the language most spoken by students learning English as a second language at U.S. public schools, and the percentage of speakers is growing at a faster rate than other top languages, according to a review of data from the National Center for Education Statistics.

But some critics have voiced concern about the foundation’s ties to Qatar. Its co-founder and chairwoman, Sheikha Moza bint Nasser, is the mother of Qatar’s emir, Tamim bin Hamad al-Thani.

Qatar said Thursday it is sending its ambassador back to Iran, intensifying a diplomatic row with a bloc of its Arab neighbors who have demanded it reduce ties with Tehran and claimed it has aided extremists and sheltered Islamist groups like the Muslim Brotherhood. Qatar has denied the allegations.

In June, President Donald Trump took credit for the move by the Saudi-led bloc and publicly criticized Qatar, a step that highlighted longstanding U.S. difficulties with Doha. While the U.S. maintains a regional military command at the base in the country, Washington has often accused Qatar of failing to crack down on the financing of militant groups—a criticism also directed at other countries, including Saudi Arabia. 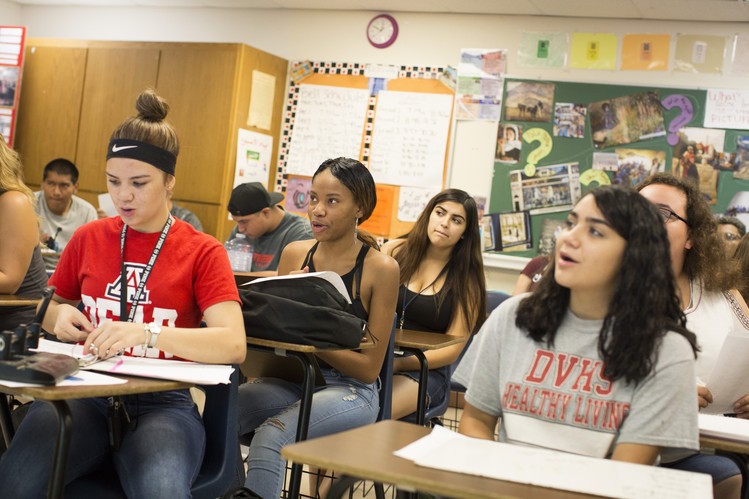 Some parents and community members in cities like Houston and Portland, Ore., have raised concerns about Arabic programs supported by the foundation and its ties to Qatar, but the biggest outcry has come from groups, bloggers and activists with conservative views.

Two years ago, Sam Herrera, a Houston activist against illegal immigration, coordinated a protest in the city over the opening of a public Arabic immersion school that received funding from the foundation.

“They hide under school districts wantonly taking the money,” he said. “They’re not going to overtly come out and tell you what they’re doing.” Mr. Herrera said he has concerns about the foundation’s ties to Qatar, which he says supports the Muslim Brotherhood, but could point to no evidence of such activities within the school.

The U.S. Department of Education declined to comment on the Qatar Foundation.

Mr. Al-Kuwari brushed off concerns that the foundation is tied to extremist groups. “There’s a lot of PR wars going on,” he said. “Everybody that comes to Qatar knows what we are about.”

The foundation, which doesn’t disclose its funding sources, focuses on serving the people of Qatar through education, community development, and science and research. Its Education City in the Qatar capital of Doha houses several K-12 schools and universities, including foreign campuses of six American colleges.

Mr. Al-Kuwari said the foundation’s U.S. work is “a way of giving back” for U.S. satellite universities helping to develop Qatari society. 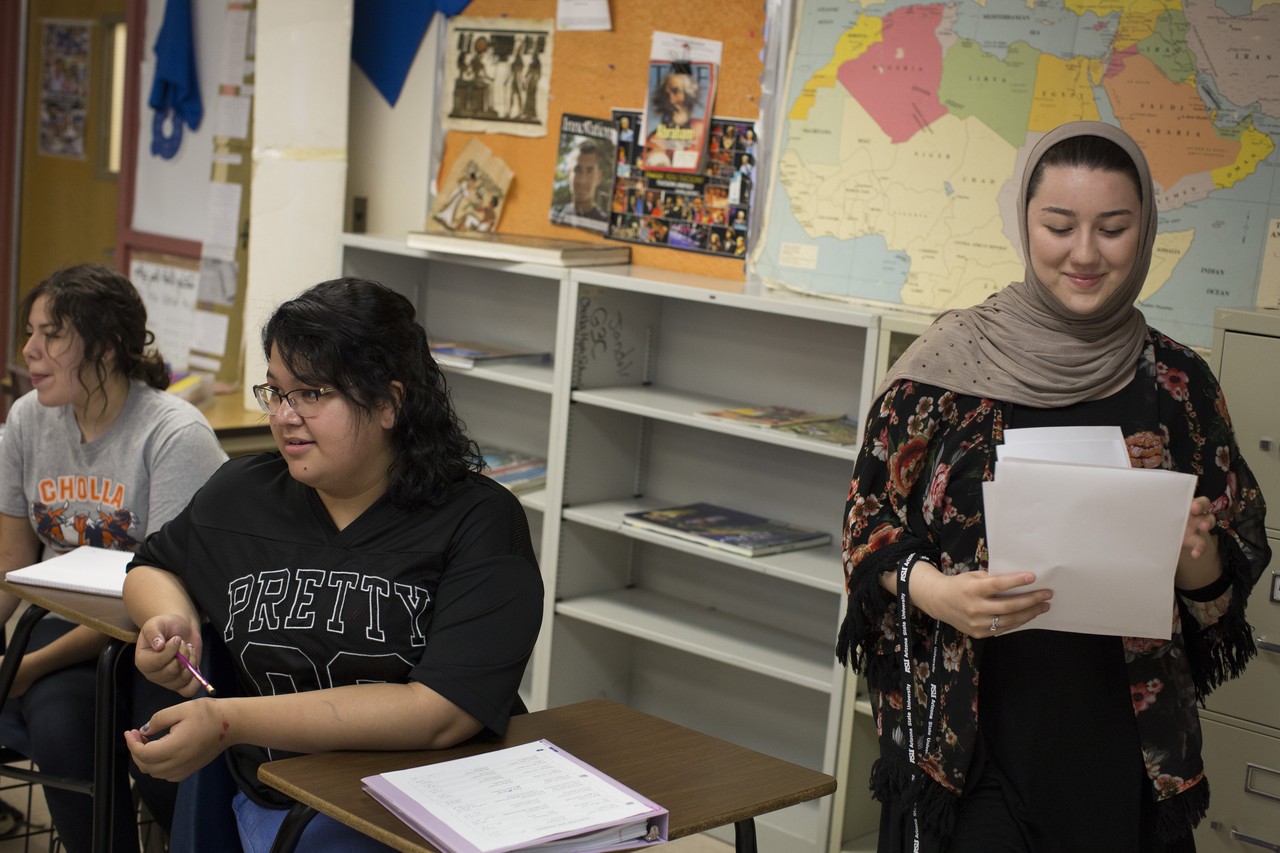 A teacher’s assistant, right, collects homework from Cholla High School students, who learn to write, read and speak Arabic. Students in the program also have the chance to travel to Arabic-speaking countries. Photo: Caitlin O’Hara for The Wall Street Journal

“The school is totally secular. It’s a state-funded school,” said Kinan Romman, who has a child at the school. “It gives kids an amazing competitive advantage in the business world, and it breaks down cultural barriers.”

Foreign involvement in U.S. schools has drawn concern before. At the university level, where foreign donations are more common, benefactors from Arab countries such as Saudi Arabia have faced similar allegations of spreading Islamic extremism. And at least two universities cut ties with China-run academic centers in 2014, citing concerns over the institutes’ hiring practices and refusal to acknowledge unflattering Chinese history.

In Texas, the state education agency launched an investigation last year into the Turkish government’s allegation that a charter school operator there was part of a multimillion-dollar plan to fund causes for an exiled Muslim cleric. The agency found no wrongdoing.

The foundation seeks out schools to apply for grants, though schools sometimes also seek it out. 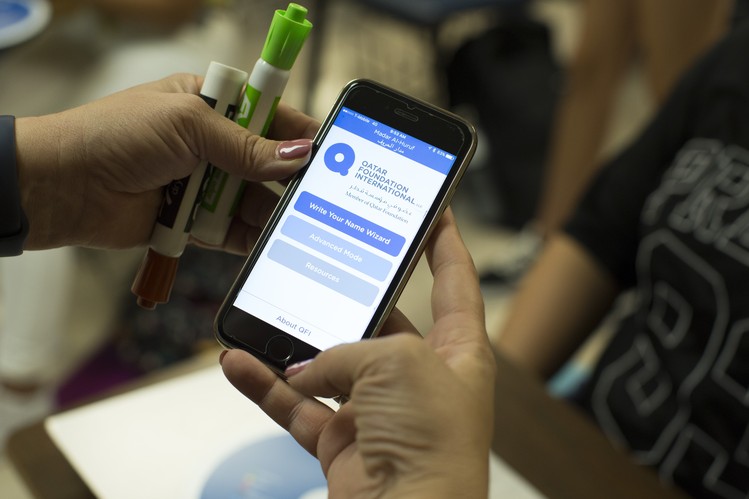 The Tucson Unified School District received a $465,000, multiyear grant in 2013 to cover teacher salaries, materials and cultural events for two schools, as well as several other grants, totaling $175,243, to expand its Arabic program. In Portland, Oregon, the public-school system was given about $375,000 over five years, starting in 2010, and this year received a $75,000 grant, helping to pay for Arabic programs at two schools. The foundation also funded a trip for some students and staff to travel to Doha.

“It’s one of the most supportive partnerships that I’ve ever experienced in 20 years of public education,” said Peyton Chapman, principal of Lincoln High School, one of the participating schools.

“The program has grown every year,” Ms. Cutts said. “I think it allows for our students to be better informed citizens.”

As part of the program, students learn about the Arabic language and culture, and take cultural trips, including visiting the Qatari embassy in D.C.

Ms. Cutts said foundation officials are involved in the school, providing professional development and visiting classrooms. “They don’t leave you out on a limb,” she said.

Read More:Indoctrination; Students Forced To Recite ‘Allah Is The Only god’