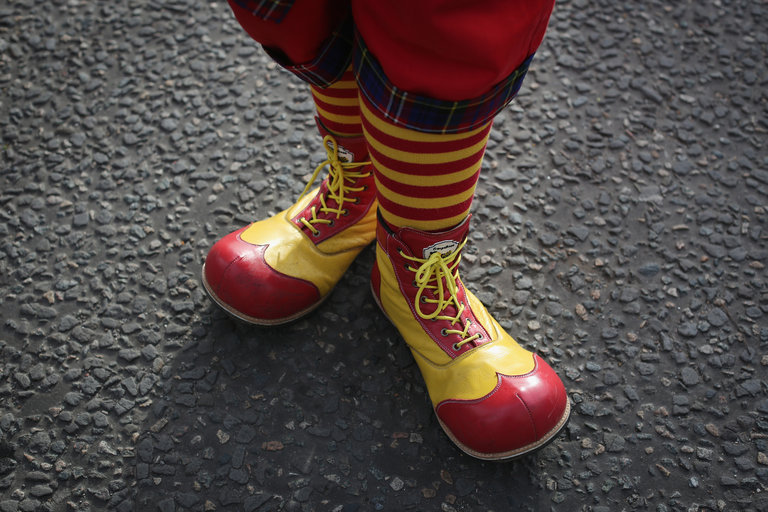 At the edge of dark, dark woods in South Carolina, children have been telling adults that a group of clowns have been trying to lure them into the cluster of trees. They say the clowns live deep in the woods, near a house by a pond.

This tale sounds like a mishmash of newspaper clippings and pages ripped from Stephen King novels, but these are actually details taken from a report filed by the sheriff’s office in Greenville County, S.C., last week, after several residents at an apartment complex there said that people in clown makeup had been terrorizing both children and adults.

Several children said that clowns were offering them money to follow them into the woods, close to the house by the pond. (The police say they have found no evidence of clown paraphernalia at the house.)

A woman walking home late one night said she had seen a “large-figured” clown waving at her from under a streetlight, the police said. (She waved back.) And another woman said her son had heard clanging chains and a banging noise at his front door. In these cases, people who reported clown sightings refused to give their names to the police.

The police don’t know whether the stories are coming from the imaginations of children or something sinister is afoot, but panicked residents seemed to be taking the law into their own hands: The Greenville sheriff’s office investigated reports that residents of the apartment complex may have fired shots in the direction of the wooded area.

Master Deputy Sheriff Ryan Flood said Tuesday that the authorities had not confirmed any of these sightings but said that extra deputies were patrolling the apartment complex. Property managers were also distributing fliers that warn children against walking in the woods alone at night.

And the calls to the police continue: On Monday, a child at a different complex phoned the police to report another clown sighting.

How do clowns — supposedly agents of humor and good fun — cause such chaos? Across the United States, clown sightings spring up like Jack-in-the-Boxes, and our collective fear of evil clowns has a way of elevating a local nuisance to a national news story.

In 2014, there were a number of reported sightings, from Albuquerque to Fishers, Ind. Last year, a clown was spotted skulking around a Chicago cemetery. And just a few weeks ago, residents of Green Bay, Wis., reported that a clown was seen toddling around town clutching a bunch of black balloons. (Somewhere, there are probably plenty of stories about good clowns, too, but an email requesting comment from Clowns of America International, a trade group, was not immediately returned on Tuesday.)

Some locals made a sport out of spotting the Green Bay clown, whom they nicknamed Gags. But others pulled out their firearms, according to C.J. Guzan, a local actor who said that the Gags project was just a viral marketing stunt for a movie.

“It’s getting a little bit scary because people are starting to believe it a little bit more, and we’re starting to see some of those unsettling pictures on Facebook,” Mr. Guzan told a local ABC affiliate. “Not of the clown, but of people armed and preparing to defend themselves, saying, ‘I can’t go outside because I’m afraid of clowns,’ or whatever. That’s just a little too far.”

The pranksters, viral marketers and criminals may be taking advantage of a cultural fear of clowns, with examples including Mr. King’s “It,” and John Wayne Gacy, a serial killer who dressed as a clown. But Steven Schlozman, a child psychiatrist who teaches a course on the psychology of horror films at Harvard University, suggests that something more primal could be at work.

Humans are built to recognize patterns from an early age, and a clown’s exaggerated human features set off a primal warning bell from within our “crocodile brains,” Dr. Schlozman said in an interview on Tuesday.

“It has this kind of capacity to grab you emotionally before it grabs you cognitively,” Dr. Schlozman said. “That’s the key to making something viral online actually: to make people emotionally engaged before they’re intellectually engaged.”

In his years researching the things that scare us, Dr. Schlozman has also uncovered another truism: Horror is almost never about the thing that’s scary. The horror unravels once terrified people respond.

When the locals take their guns out and fire into the woods, it’s not that different from people going with their pitchforks into the woods after Frankenstein’s monster, he said, adding: “It never ends well.”