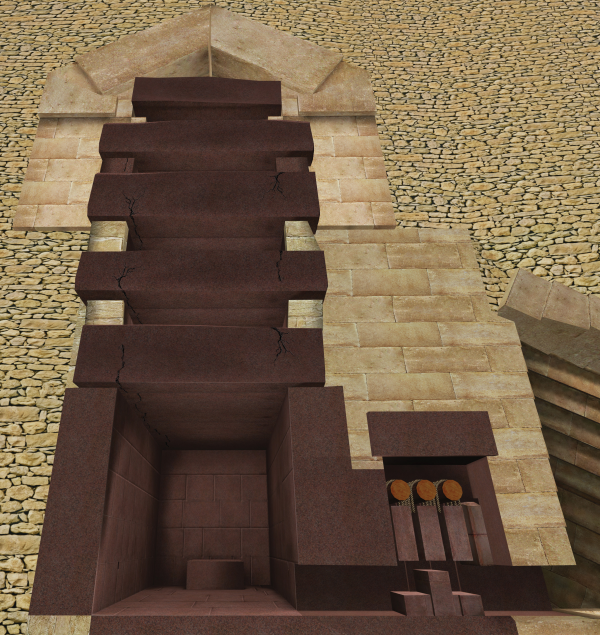 The ancient Egyptians created a simple yet elaborate system of blocks and grooves within the Great Pyramid of Giza to protect the King’s Chamber from tomb robbers.

In an upcoming episode of the Science Channel’s “Unearthed,” that system comes to life via computer animations. In the episode, Egyptologist Mark Lehner describes the system for viewers, calling it a “very primitive machine.” Lehner leads Ancient Egypt Research Associates (AERA), a team that has been excavating at Giza for about 30 years.

What those two chambers were used for is unclear.

To protect the pharaoh’s chamber, ancient Egyptians constructed a series of grooves and blocks that are hidden beneath the walls of the pyramid. While scholars have known about this system since at least the 19th century, the TV show uses computer animations to present a reconstruction. The animations show how blocks were dropped down grooves near the King’s Chamber after the pharaoh’ burial. [See the Reconstruction of the ‘Primitive Machine’ in the Great Pyramid]

Just outside the entrance to the King’s Chamber (hidden within the Great Pyramid of Giza), workers carved out a set of grooves and fitted three huge granite slabs (red arrow) into them. Once the king’s mummy was safely inside the chamber, the workers dropped those down to block the entrance.

The system was sophisticated for its time, said Lehner, noting that it blocked off the entranceway to the King’s Chamber with giant blocks, making it harder for a thief to break in.

A few Egyptologists believe that Khufu may have outwitted the looters with another tactic, however. In addition to the security system, the pyramid also contains four small shafts: two that originate at the King’s Chamber and two more that originate at the Queen’s Chamber. Robot exploration of the shafts has revealed what may be three doorways with copper handles.

Egyptologist Zahi Hawass, Egypt’s former antiquities minister, told Live Science in 2013 that he thinks the shafts lead ultimately to Khufu’s real burial chamber. The sarcophagus in the King’s Chamber is simply a decoy, Hawass said, meant to fool looters into thinking that they had found Khufu’s burial.

“I really believe that Cheops’ [another name for Khufu] chamber is not discovered yet, and all three chambers were just to deceive the thieves, and the treasures of Khufu [are] still hidden inside the Great Pyramid,” Hawass told Live Science in 2013. A project is currently underway to scan the Great Pyramid using a variety of technologies. Researchers in that project said they hope that if a hidden burial chamber exists, the scans will reveal it.