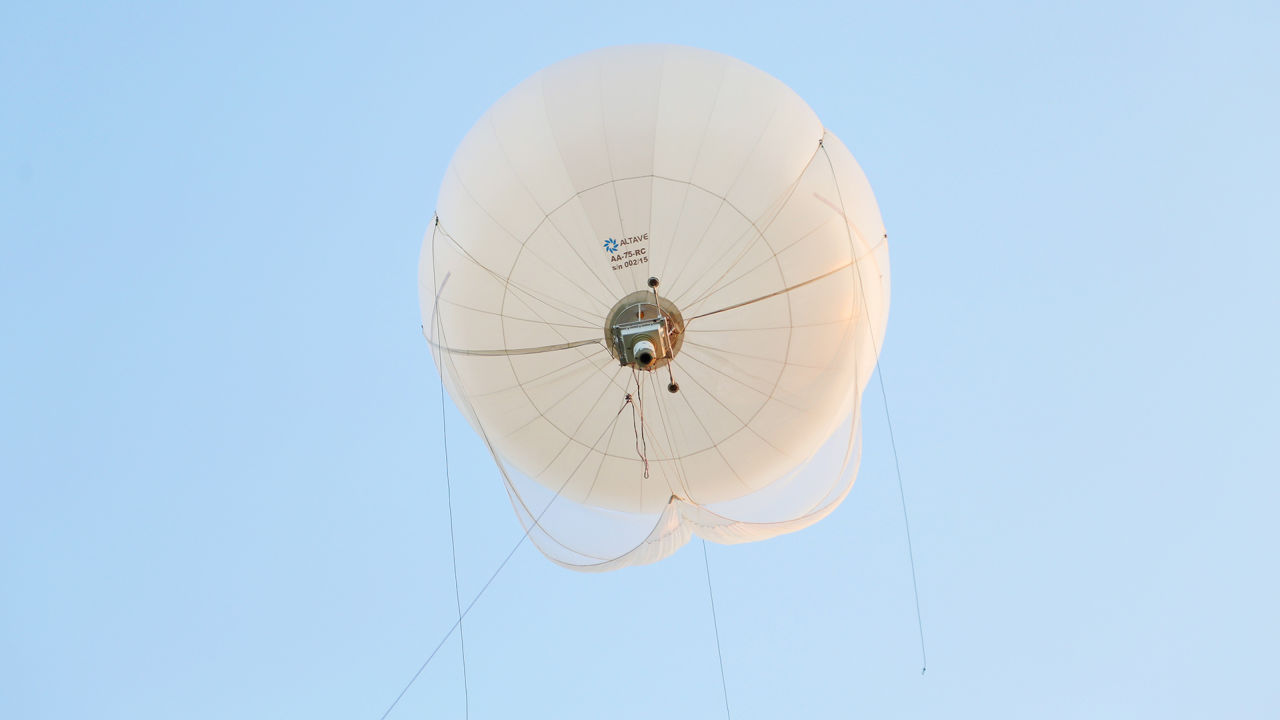 When the Olympic Games begin next month in Rio de Janeiro, billions of people are expected to watch athletes from countries around the world compete.

But also watching over the Olympic and Paralympic events will be a set of futuristic, balloon-mounted surveillance camera systems capable of monitoring a wide swath of the city in high resolution and in real-time.

Initially developed for use by U.S. forces in Iraq and Afghanistan by Fairfax, Virginia-based Logos Technologies, the system is sold under the name Simera, and offers live aerial views of a large area, or what the company calls “wide-area motion imagery,” captured from a balloon tethered some 200 meters above the ground. The system’s 13 cameras cameras make it possible for operators to record detailed, 120-megapixel imagery of the movement of vehicles and pedestrians below in an area up to 40 square kilometers, and for up to three days at a time.

The Brazil sale, which includes four systems operated under an $8 million contract, marks the first export of Simera, and the first time such as system will be deployed by a non-U.S. government at a large-scale event, the company says. “Simera was built late last year and we tested it this past February and then immediately sold four of them to Brazil,” says Doug Rombough, Logos’s vice president of business development.
“The system is like a live city-wide Google Maps combined with TiVo, letting authorities view ground-level activities in real time and rewind through saved images.”

Rombough compares Simera to a live city-wide Google Maps combined with TiVo, explaining that it lets authorities not only view ground-level activities in real time but also rewind through saved images to do things like track a suspicious vehicle—for instance, one that departs a crime scene—back to its origin.

The government has announced it will deploy 47,000 security guards, 65,000 police, and 20,000 armed service personnel to patrol the Games, which have raised security concerns amid soaring crime rates in the city and a global burst in terrorist activity. Last week, Brazilian police arrested 12 people alleged to be planning an ISIS-inspired attack on the Games, which have been said to be a target discussed in jihadist chat groups.

The system evolved from technologies Logos previously supplied to the Defense Department for use in combat zones, including the Constant Hawk aircraft-mounted surveillance camera system and Kestrel, a similar balloon-mounted sensor system that’s been used in Afghanistan to monitor activity near about a dozen U.S. bases.

There, the company says the technology helped U.S. troops monitor potentially threatening activity as it evolved over days, enabling officials, for instance, to track the movement of suspicious vehicles in the vicinity of an attack. But as Logos’s technology continues to evolve and become easier and cheaper to deploy in civilian scenarios, it’s likely to raise more questions about the appropriate balance between security and privacy.

Over time, the company’s sensor systems have become lighter and easier to deploy: Early Constant Hawk systems weighed about 1,500 pounds, Kestrel units weighed around 150 pounds, and Simera systems just 40 pounds, expanding the range of aircraft that can carry the devices. Including the ground-based equipment necessary to control and monitor the cameras, the Simera system can be transported in a single vehicle and put into an operation in under three hours, according to Logos. 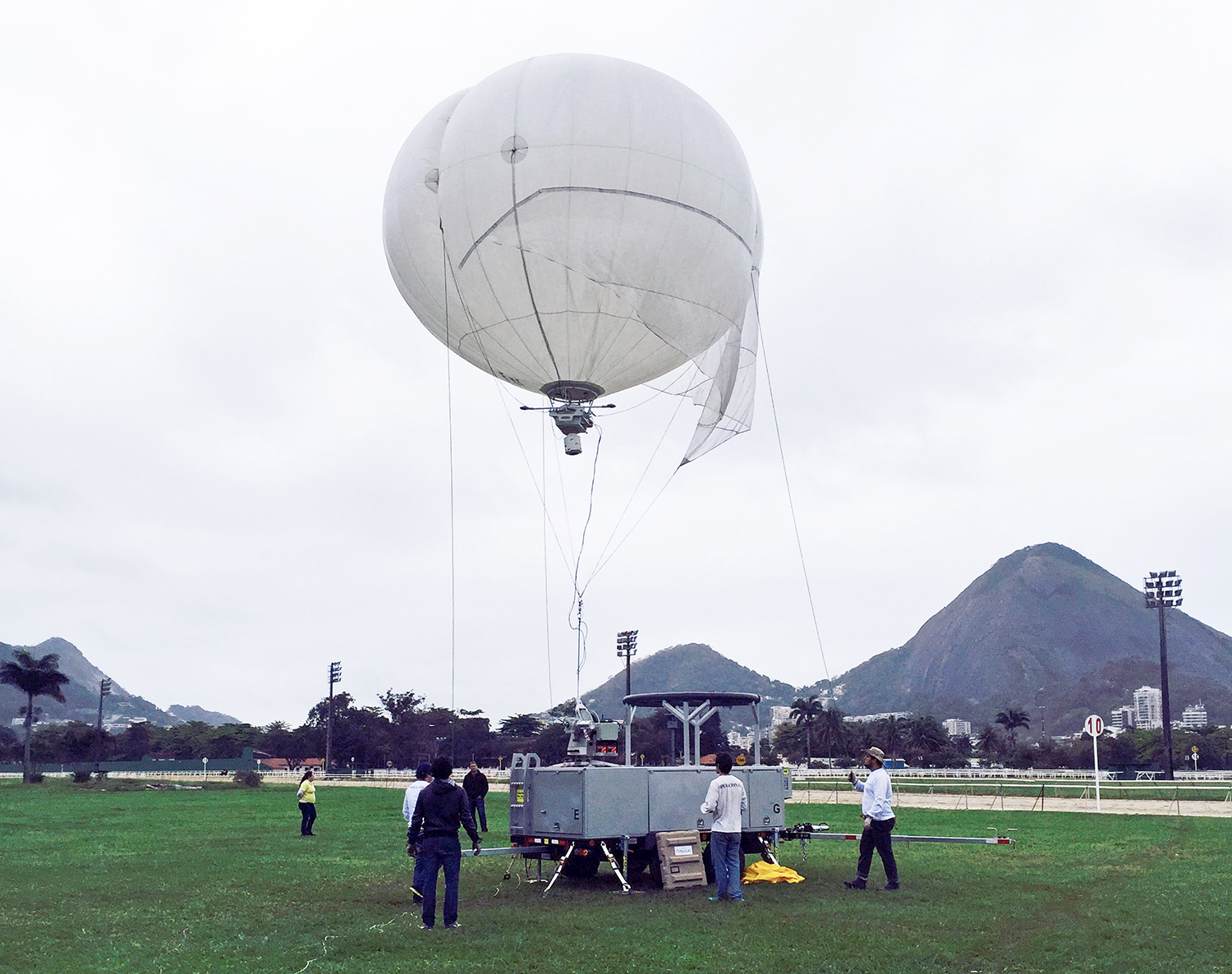 And as the company’s systems have gotten lighter in weight and easier to deploy, the range of potential use cases has expanded. In addition to policing large events and patrolling borders and ports, the company hopes its system could prove useful in supporting humanitarian assistance and disaster relief missions.
A 2013 video describing the Kestrel system

“We see Simera not only being used for the Department of Defense but, we believe, event security, disaster relief, or even protecting wildlife from poachers in national parks,” says Rombough.

In 2012, a weeklong test of Kestrel’s potential by the Department of Homeland Security led to 80 arrests near the Mexican border in Nogales, Arizona, the company said. The company has also recently been testing Redkite, a smaller sensor system designed for mounting beneath small planes, helicopters, and tactical unmanned aircraft.

The Simera systems will likely be deployed outside four Olympic venues, Rombough says, though Logos won’t be involved in the day-to-day operations of the units, which are being deployed by Brazilian Ministry of Justice contractor Altave. Operators will be able to monitor multiple camera angles at once—the system can provide up to 10 video windows within its field of view, and Rombough says operators can generally pay attention to data from up to about eight feeds at any given time. As many as six users can watch different parts of the full captured image as if they were independent Pan, Tilt, and Zoom (PTZ) cameras, and use a DVR-style rewind feature to scan through up to eight hours of cached footage, says Logos. (The Simera systems omit some night vision capabilities that were available in military models, making it easier to sell outside the U.S. under export control rules.)

Generally, Rombough says, Simera’s only limiting factor is the time that a balloon or aerostat can stay in the air—typically up to three days before more helium is required—and the weather. “The most important part for us to make sure that our sensor can handle more turbulence and winds and that type of stuff than the balloon itself can handle so we’re not the restricting part of that type of system,” he says. “If the balloon can stay up itself, then we’re able to stay up and provide good imagery.”

While the image clarity from Simera’s sensors is good enough to follow individual people and vehicles as they move about the city, it’s not high enough resolution to make out individual faces or license plate numbers, Rombough says. However, a higher resolution video camera attached to the same balloon, which captures images at 60 times that of full HD resolution, or 15 times 4K, at three frames per second, will allow operators to get a closer look at anything that looks untoward.
“”It’s a tremendously powerful surveillance technology that has the potential of monitoring the whereabouts of everyone in a town or city,” says the ACLU’s Jay Stanley.”

“It’s good enough to track people on the ground, and of course to track vehicles, and at any given time, if you see something suspicious, and you want a closer look, that’s when you cue that full-motion video camera system that hopefully is flying on the same balloon or aerostat with you,” he says.

When it comes to privacy concerns, Rombough says it’s ultimately up to the operating agencies to follow applicable rules about what’s allowed. “I guess it’s like any Homeland Security or law enforcement tool—these systems will be subject to the government rule and regulations, and we’ll let the appropriate agencies deal with that,” he says. He argues the systems are only monitoring outdoor, publicly visible activities that could already be tracked with existing tools like police helicopters.

Still, courts and privacy activists have wrestled with the privacy implications of other technologies that make widespread, mass surveillance more practical and inexpensive. Simera and similar systems would seem to make monitoring wide swaths of cities much easier than would be possible with circling helicopters.

Jay Stanley, a senior policy analyst at the American Civil Liberties Union who’s written in the past about drone-based surveillance, says the privacy risks from deploying the technology in a U.S. city would simply be too great to justify its use. 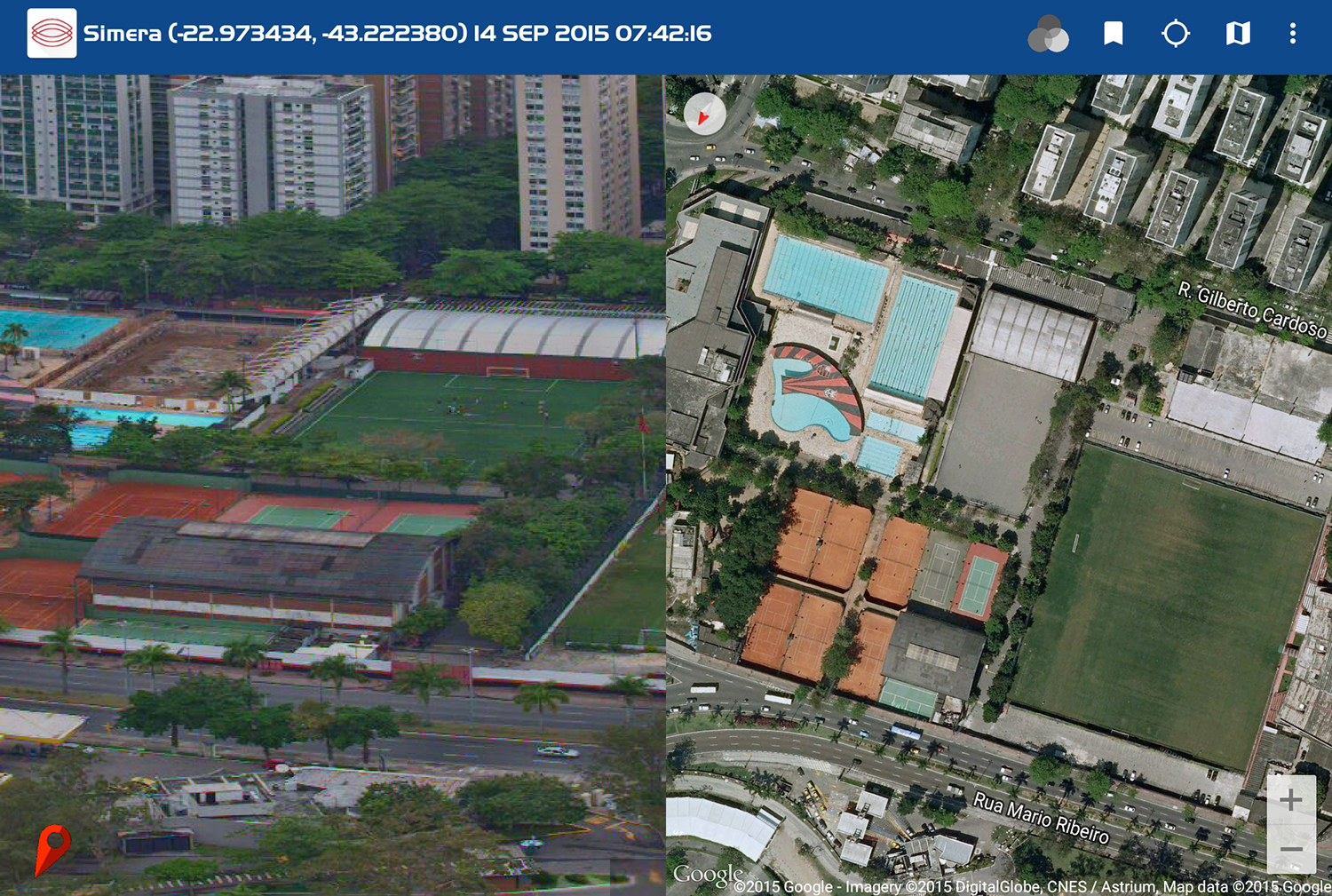 “it’s a tremendously powerful surveillance technology that has the potential of monitoring the whereabouts of everyone in a town or city, and that is just too much power to allow the government to wield,” he says. “While every technology has its benefits, at a certain point we say no, because the privacy invasion is too significant.”

Stanley says it’s not entirely clear how courts would rule on domestic police use of such a tool, since most laws haven’t been written with such technology in mind, though he says it’s possible courts would consider such surveillance an unconstitutional search, citing a 2012 Supreme Court ruling that police GPS tracking of a private vehicle requires a warrant. And, he says, a plan by a Utah police department to monitor high crime areas from an unmanned blimp was denied by the Federal Aviation Administration, saying the “nocturnal surveillance airship” was too much of a risk to other aircraft.

But with security concerns on the rise across the globe, Rombough says the company’s exploring a wide variety of business opportunities.

“We’ve kind of got fishing lines in the water in a lot of different areas,” he says. “We kind of believe this is a kind of technology, as the world continues to be in upheaval security-wise, that people are gonna want this more and more.”