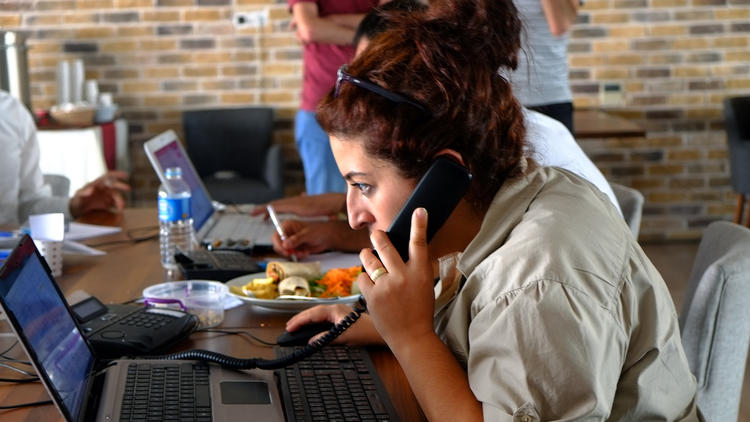 Thousands of people taken into custody since Turkey’s attempted coup are being held in sports facilities and stables, where some have been beaten and mistreated, according to lawyers familiar with the cases.

Lawyers from the Ankara Bar Association’s human rights commission say members have reported the alleged abuses after trying to meet with clients. Other lawyers and human rights organizations have made similar allegations.

In addition to verbal and physical abuse, clients complained about a lack of food and that their hands have been bound for days, said Sercan Aran, deputy head of the commission. The mistreatment is “systematic,” he said, while lawyers have been prevented from documenting physical signs of beatings and abuse.

The Turkish government strongly denies the allegations, and President Recep Tayyip Erdogan has stressed in interviews that due process is being followed.

“We are doing everything according to the law,” said a Turkish official, who spoke on the condition of anonymity in line with government protocol. He said that the law is being upheld and that he “categorically denies” that prisoners have been abused in custody.

The United States and European nations have urged Turkey to maintain democracy and respect for human rights after the brazen attempted coup, which left at least 232 people dead as a rebel faction of the military bombed parliament and police bases with hijacked aircraft.

In a large-scale crackdown on alleged coup plotters, more than 9,000 people – largely troops – have been taken into custody, while 50,000 others have been fired from their jobs or suspended while they are investigated. Erdogan, who has declared a state of emergency, has pledged to “cleanse” what he has described as a “cancer” that has metastasized in the country.

The state of emergency has compounded fears among lawyers and human rights groups that the rule of law will be eroded, which would threaten Turkey’s long-standing bid to join the European Union.

“The idea that Turkey, a country seeking European Union membership, would not respect the law is absurd,” the Turkish official said, pointing out that 1,200 of the detained were released on Saturday.

“All we care about is concrete evidence of complicity in this grave assault,” he said.

Before the emergency law was announced, detainees were already being held without charge longer than legally allowed, lawyers said. Under the new measures, suspects can be held for up to 30 days.

Some are also being denied the right to speak privately with attorneys and to call a next of kin, according to lawyers and families searching for information about missing relatives.

The Ankara Bar Association has set up a 24-hour hotline and crisis center, where phones ring incessantly. In a state of fear in Turkey about being seen as sympathetic to coup-plotters or critical of the government, most lawyers and family members declined to be quoted by name.

“Crisis Center,” said one curly-haired lawyer working at the center, as she picked up one of four phone lines. “Have you called previously?”

She typed the name of the caller’s missing husband into her computer and came up with a match. “He’s in the academy sports hall,” she said, then added: “Don’t go. They aren’t letting anyone visit.”

She told the caller that he hasn’t been appointed an attorney but to call back the next day for an update.

Others were being held at an intelligence building and other detention facilities. On Friday, the police sent more names, bringing the number of service members recorded as being in custody in Ankara to 4,218.

The call center covers only the Ankara area. For the families of people detained in Istanbul and elsewhere, there is no such service.

The Ankara Bar Association has assigned 961 of its lawyers to coup-related cases, but most of the bar’s 3,000 criminal lawyers are too afraid to take them on or are politically opposed to doing so, Aran said.

Dogukan Tonguc Cankurt, another lawyer with the bar association, said that attorneys representing clients connected with the coup have faced harassment.

“If they try to record signs of torture, they face threats and violence from the police,” he said. “A colleague that tried to photograph evidence of torture was made to erase the photos.”

The prosecutors office gave the Ankara Bar Association a list of 189 lawyers who aren’t allowed to represent coup plotters.

Most had represented cases linked to the Gulen movement in the past. The Turkish government accuses its leader, Fethullah Gulen, a Turkish cleric living in self-imposed exile in Pennsylvania, of being behind the coup, a claim he has denied.

The Islamic scholar Turkey blames for the failed coup

In one official written statement, a general who denied involvement in the coup said he was unarmed and did not resist arrest when police forces turned up at his office. His attorney added a note at the end asking that his client be referred for medical examinations to record “wounds” on his body.

“I have not benefited from the right to talk to my client,” the attorney noted.

The government official said that injuries may have occurred at the time of arrest.

“During many arrests, fire was exchanged and there was resistance from coup plotters,” he said. “Individuals in need of medical assistance receive necessary treatment.”

However, Andrew Gardner, a researcher for Amnesty International, said he didn’t think that the fact that beatings had taken place in custody was “in dispute whatsoever.”

“There are a litany of abuses that have been reported to us,” he said. “There are serious allegations of widespread mistreatment and mutually corroborating reports going beyond beatings to high levels of abuse.”

Gardner also said that complaints of sexual abuse had been reported to Amnesty.

One lawyer, who spoke on the condition of anonymity because of the sensitivity of the topic, said a detainee reported being raped in custody.

Gardner said it is not possible that authorities have collected evidence on all of the suspects.

“And if they don’t have concrete evidence, they shouldn’t be detaining them,” he said.

A woman who had traveled from Britain in search of her missing brother, a military officer, said the family last heard from him the morning after the coup via a text message that read: “I’m fine.”

A lawyer at the call center explained to the woman that her brother is in a high-security prison and that in normal times, three relative would be allowed to visit.

“But these aren’t normal times,” the lawyer said, adding that the officer has been appointed an attorney.

“These are the brave ones,” the woman said of the lawyers in the call center, who work for a nominal fee, doing shifts through the night. “They have the courage to help us. It gives me some hope.”