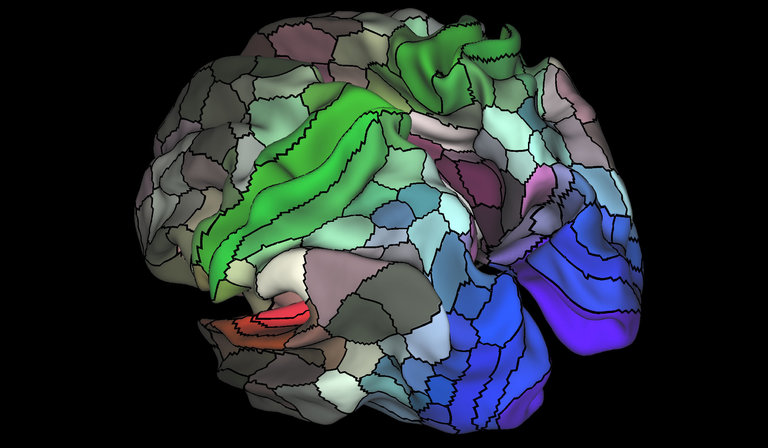 The brain looks like a featureless expanse of folds and bulges, but it’s actually carved up into invisible territories. Each is specialized: Some groups of neurons become active when we recognize faces, others when we read, others when we raise our hands.

On Wednesday, in what many experts are calling a milestone in neuroscience, researchers published a spectacular new map of the brain, detailing nearly 100 previously unknown regions — an unprecedented glimpse into the machinery of the human mind.

Scientists will rely on this guide as they attempt to understand virtually every aspect of the brain, from how it develops in children and ages over decades, to how it can be corrupted by diseases like Alzheimer’s and schizophrenia.

“It’s a step towards understanding why we’re we,” said David Kleinfeld, a neuroscientist at the University of California, San Diego, who was not involved in the research.

Scientists created the map with advanced scanners and computers running artificial intelligence programs that “learned” to identify the brain’s hidden regions from vast amounts of data collected from hundreds of test subjects, a far more sophisticated and broader effort than had been previously attempted.

While an important advance, the new atlas is hardly the final word on the brain’s workings. It may take decades for scientists to figure out what each region is doing, and more will be discovered in coming decades.

“This map you should think of as version 1.0,” said Matthew F. Glasser, a neuroscientist at Washington University School of Medicine and lead author of the new research. “There may be a version 2.0 as the data get better and more eyes look at the data. We hope the map can evolve as the science progresses.”
Continue reading the main story 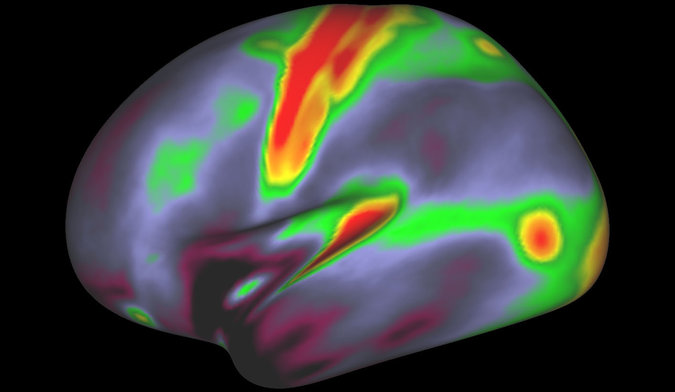 The first hints of the brain’s hidden geography emerged more than 150 years ago. In the 1860s, the physician Pierre Paul Broca was intrigued by two of his patients who were unable to speak.

After they died, Broca examined their brains. On the outer layer, called the cortex, he found that both had suffered damage to the same patch of tissue.

That region came to be known as Broca’s area. In recent decades, scientists have found that it becomes active when people speak and when they try to understand the speech of other people.
Photo
The left hemisphere of the brain’s cerebral cortex, showing areas with high myelin in red and yellow, and areas with low myelin in indigo and blue. Credit Matthew F. Glasser, David C. Van Essen

In the late 1800s, a group of German researchers identified other regions of the cortex, each having distinct types of cells packed together in unique ways. In 1907, Korbinian Brodmann published a catalog of 52 brain regions.

Neuroscientists have relied on his hand-drawn map ever since, adding a modest number of new regions with their own research. “This is the standard for where you are in the brain,” said Dr. Glasser.

Three years ago, Dr. Glasser and his colleagues set out to create a new standard. They drew on data collected by the Human Connectome Project, in which 1,200 volunteers were studied with powerful new scanners.

The project team recorded high-resolution images of each participant’s brain, and then recorded its activity during hours of tests on memory, language and other kinds of thought.

In previous attempts to map the cortex, scientists typically had looked only at one kind of evidence at a time — say, the arrangements of cells. The Human Connectome Project has made it possible to study the brain in much greater detail.

In addition to looking at the activity of the brain, the scientists also looked at its anatomy. They measured the amount of myelin, for example, a fatty substance that insulated neurons. They found sharp contrasts in myelin levels from one region of the cortex to the next.

“We have 112 different types of information we can tap into,” said David C. Van Essen, a principal investigator with the Human Connectome Project at Washington University Medical School.

Using these variables, the scientists trained a computer with data from 210 brains to recognize discrete regions of the cortex. Once the computer profiled the distinctive combinations of myelin, activity and other characteristics, they tested it on 210 other brains.

The computer pinpointed the regions in the new brains 96.6 percent of the time. The scientists found that only a small number of features were required to map the brain. That means that researchers will be able to use their method to map an individual’s brain in a little over an hour of scanning.

The map produced by the computer includes 83 familiar regions, such as Broca’s area, but includes 97 that were unknown — or just forgotten.

In the 1950s, for example, German researchers noticed a patch on the side of the brain in which neurons had little myelin, compared with neighboring regions. But the finding was soon neglected.
Photo
A brain scan showing the pattern of brain activation in the left hemisphere when listening to stories while in a scanner. Credit Matthew F. Glasser, David C. Van Essen

“People tended to ignore it, and it was lost in the literature,” said Dr. Van Essen.

The computer rediscovered the odd territory, and Dr. Van Essen and his colleagues found that it becomes unusually active when people listen to stories. That finding suggests the region, which they call 55b, is part of a language network in the brain, along with Broca’s area.

In other parts of the cortex, the scientists were able to partition previously identified regions into smaller ones. For example, they discovered that a large region near the front of the brain, the dorsolateral prefrontal cortex, actually is made up of a dozen smaller zones.

The region becomes active during many different kinds of thought, ranging from decision-making to deception. It’s possible that each of the newly identified smaller parts is important for one of those tasks.

The computer program developed by the scientists became so adept at mapping the cortex that it could identify hidden regions even when they took on unusual shapes. Twelve of the research subjects, for example, have a 55b region that’s split into two isolated patches. (The researchers don’t know whether this affects how the subjects use language.)

Other neuroscientists hope that the new map will sharpen their experiments, allowing them to discover how the brain’s cogs mesh.

“The next big step is seeing what this can do for us in terms of buying more power,” said Emily S. Finn, a graduate student at Yale University who has used Human Connectome Project data to find links between brain activity and intelligence.

Dr. Kleinfeld predicted that other researchers will find ways to verify the new map’s accuracy. Genetic testing, for example: If 180 regions of the cortex really are distinct, then the neurons in each should share a distinct combination of active genes.

“You can imagine going to these 180 regions, taking a punch of tissue, and seeing if you can really genetically differentiate them,” said Dr. Kleinfeld.

Many experts believe that the brain, on closer inspection, will turn out to be an even greater collective of regions that somehow cooperate for the common good.

“It’s very clear that many of those regions are likely to be composed of smaller pieces,” said Danielle S. Bassett, a neuroscientist at the University of Pennsylvania.

Dr. Van Essen said that he and other scientists will be using the map to track the development of young brains and to look for changes caused by disorders like Alzheimer’s disease.

“We shouldn’t expect miracles and easy answers,” he said, “but we’re positioned to accelerate progress.”