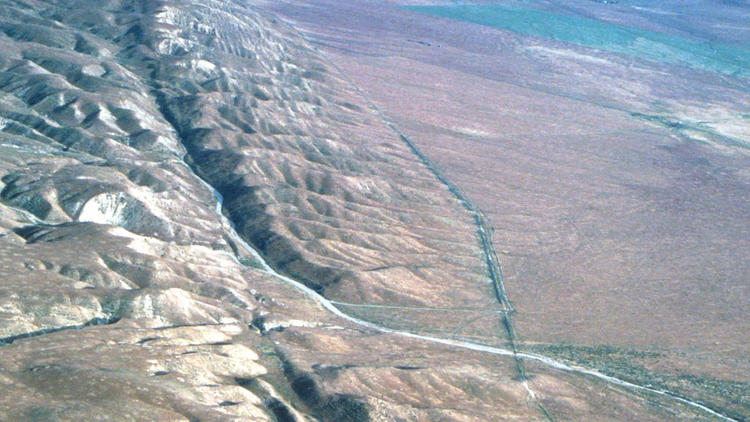 The gravitational tug between the sun and moon is not just a dance of high and low tides: It can also trigger a special kind of earthquake on the San Andreas fault.

This phenomenon has fascinated scientists for years. Like sea levels, the surface of the Earth also goes up and down with the tides, flexing the crust and stressing the faults inside. Further study found that during certain phases of the tidal cycle, small tremors deep underground – known as low-frequency earthquakes – were more likely to occur.

“It’s kind of crazy, right? That the moon, when it’s pulling in the same direction that the fault is slipping, causes the fault to slip more – and faster,” said Nicholas van der Elst, a U.S. Geological Survey geophysicist and lead author of a new study on the subject published Monday in the Proceedings of the National Academy of Sciences. “What it shows is that the fault is super weak – much weaker than we would expect – given that there’s 20 miles of rock sitting on top of it.”

Studying how these low-frequency earthquakes respond to the tides can reveal new information about the San Andreas and what it might mean for larger earthquakes, researchers say. The data offer a window into deeper parts of the fault – as much as 20 miles underground – that would otherwise be inaccessible.

Scientists first discovered these deeper tremors on the fault about 10 years ago, along a particularly sensitive section in Parkfield, Calif., where the San Andreas transitions from its northern section, where it’s gently releasing tectonic energy, to its southern portion, which is locked and capable of producing the so-called Big One.

For his most recent study, Van der Elst and his team looked at about 81,000 low-frequency earthquakes from 2008 to 2015 along the Parkfield section of the fault and compared the data to the two-week tidal cycle known as the “fortnightly tide.” They found that these earthquakes were most likely to occur during the waxing period, when the tide was getting bigger the fastest.

Like ocean tides, the strongest Earth tides occur when the sun and moon are aligned, and the weakest occur when they are 90 degrees apart. The same gravitational forces stretch and compress the Earth’s crust (though the rock moves less dramatically than seawater).

Some faults are more susceptible to tidal triggering than others, such as offshore faults like the Cascadia subduction zone off the Pacific Northwest coast, scientists said. Other characteristics of the fault, such as its orientation or how close it is to the Earth’s crust, also affect the tidal response.

It’s remarkable that the San Andreas even produces small earthquakes in response to tidal forces, researchers said, given that the fault is not oriented in a way that gets the full strength of the tides.

Low-frequency earthquakes – they’re called “low-frequency” for the rumbling sound that they make, not for their rate of occurrence – tend to have magnitudes less than 1.0 and occur about 15 to 30 kilometers (about nine to 19 miles) below ground, nearing the deepest part of the crust where it transitions to the Earth’s mantle.

The significance here is less the earthquakes themselves, and more the information they’re giving scientists about the deeper parts of the fault, said USGS seismologist David Shelly, who helped write the new study.

“They tell us that the fault continues down below where the regular or typical earthquakes stop on the San Andreas, about 10 or 12 km [about six to seven miles],” Shelly said. “And they tell us a lot of things about that deep part of the fault that before, we had no idea existed at all.”

They also show that this part of the San Andreas is creeping, or slowly moving, almost all the time. These low-frequency earthquakes, with the help of tidal forces, have essentially created a natural laboratory for scientists to keep tabs on the fault’s movement.

“It’s almost like having a lot of little creep meters embedded in the fault,” Shelly said. “We can use these low-frequency earthquakes as measurements of, at least in a relative sense, how much slip is happening at each little spot on the deep part of the fault where we see these events. When we don’t see them, we don’t know what’s happening; we don’t know whether it’s slipping silently or not slipping at all.”

“So if all of a sudden, we saw that the deep part of the fault was slipping a huge amount, it might be an indication that there was an increased chance of having an earthquake come at the shallower part of the fault,” he said.

By looking at how the rate of activity varied over a two-week tidal cycle, Van der Elst and Shelly found in their new study that the fault produced more low-frequency earthquakes if the tidal stress was larger than it was the day before.

It’s like the fault has an earthquake budget, Van der Elst explained. “If you used them up yesterday, you don’t have as many to trigger today. By actually measuring that, we get an estimate of what that stress budget is.”

Essentially, scientists now have a way to measure the fault’s recharge time in certain locations.

“Scientifically, it’s really cool, because we don’t have any other way to directly estimate that number – the rate at which stress is accumulating on the fault,” Van der Elst said. “This is another study that’s adding to our knowledge of how faults work in this transition.”

But, he added: “We don’t quite know yet what it’s going to mean in the long term, whether it’ll result in some sort of warning that an earthquake is coming. We’re going to have to monitor it for a lot longer.”