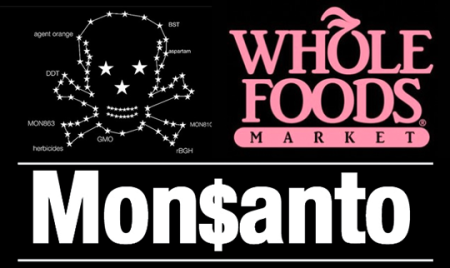 Washington D.C. — National grassroots organizations expressed their outrage today towards a group of U.S. Senators and major, self-described, “organic companies” that have brokered a backroom legislative deal to kill mandatory GMO labeling of food products across America while stifling first-of-its-kind state legislation in Vermont (slated to go in effect this Friday, July 1st) that would mandate labeling of foods that have been genetically engineered in laboratories.

The companies, including Whole Foods, Smucker’s and Organic Valley, among others, have historically funded major public relations and advertising campaigns to promote themselves as  “organic” brands.  Now, some national leaders are criticizing these companies for “selling out” the GMO labeling movement, public health and the environment and urging the public to fight back.

“Make no mistake, these self-proclaimed organic companies, including Whole Foods, Smucker’s Stonyfield and Organic Valley have just joined with Monsanto and sold out the ability for parents to know what they are feeding their children,” said Dave Murphy, Executive Director of Food Democracy Now!

Murphy continued, “Monsanto and Whole Foods’ new fake labeling bill would not only preempt Vermont’s bill this week, but all provisions of the bill are OPTIONAL — the bill’s language is so poorly written that it would actually not include 85% of the current GMOs on the market, including Roundup Ready GMOs owned by Monsanto that are sprayed with the weedkiller glyphosate, which the World Health Organization declared a “probable carcinogen” linked to cancer in lab animals and humans last year.”

Food Democracy Now! and Organic Consumers Association are now leading a grassroots pressure campaign to urge the US Senate to block the last minute legislative deal.

“Consumers need to resist this outrageous attack on consumer and states’ rights with their pocketbooks and their political voices, ” said Ronnie Cummins, the International Director of the Organic Consumers Association.  “This is an outrageous assault by corrupt corporate interests on our basic freedoms and a mother’s right to know what’s in the food they feed their children.”

Polls regularly show that ninety percent of American consumers want to know whether their food is genetically engineered and the impending Vermont GMO labeling law has already forced major food corporations to disclose GMO contamination in their products”.

“Now, at the last minute, a self-selected group of so-called “organic leaders,” including the head of Whole Foods Market, Walter Robb; Gary Hirshberg, the CEO of Stonyfield Farm,  the bogus pro GMO labeling group Just Label It, run by the Environmental Working Group, and lobbyists for the corporate owned organic companies inside the Organic Trade Association (led by “natural” brands Smucker’s and White Wave) have made an absolutely corrupt bargain with Congress  completely embracing an industry-crafted DARK Act “compromise”, now known as The Stabenow/Roberts bill,” continued Cummins.

A coalition of independent family own organic companies and consumers groups is actively working to get Senators the real facts about this bill even as the Organic Trade Association and its corporate-own organic companies are working behind the scenes to intentionally confuse Senators about what’s actually in the bill and the fact that the millions of Americans that actually support GMO labeling are not represented by their corrupt corporate interests.

Read More:Monsanto Wants To Replace The Bees They Are Killing With Genetically Engineered Flying Ants

Read More:Members Of UN Panel On Glyphosate Have Ties To Monsanto