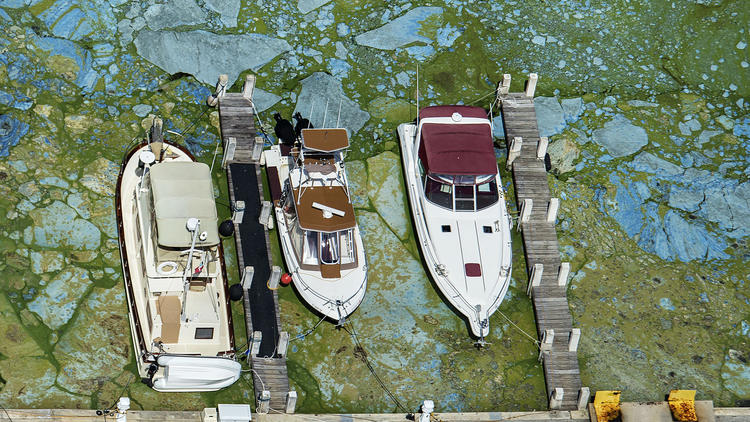 A smelly, “guacamole-thick” muck is fouling a stretch of beaches promoted as Florida’s “Treasure Coast,” where lawmakers and residents blame the federal government, saying the algae crisis is fueled by freshwater flows controlled by Army officials to protect an erosion-prone dike.

The blue-green algae is the latest contaminant featured in yearslong arguments over water flowing from Lake Okeechobee, which is critical to South Florida’s water supply and flood control systems.

Water full of algae laps along the Sewell’s Point shore on the St. Lucie River under an Ocean Boulevard bridge, Monday, June 27, 2016. The Martin County Commission decided at an emergency meeting Tuesday to ask state and federal authorities to declare a disaster where blue-green algae has closed beaches. County officials on Florida’s Atlantic coast want the U.S. Army Corps of Engineers to close the locks between Lake Okeechobee and the St. Lucie River.

Sarah Chaney, a receptionist at Central Marine, said boaters and fisherman are cancelling reservations after seeing reports of the algae, which she called “horrible and disgusting.”

“I would describe them as guacamole-thick. And it stinks,” said Gabriella Ferrero, spokeswoman for Martin County.

Florida’s U.S. senators, Republican Marco Rubio and Democrat Bill Nelson, have joined Martin County commissioners in calling for the Army Corps of Engineers to stop the flow of water between the river and Lake Okeechobee.

Residents and business owners blame the algae on pollutants streaming from the lake.

In a news release Thursday afternoon, the Corps said it would begin reducing the flow from the lake Friday, targeting the Caloosahatchee Estuary and the St. Lucie Estuary.

After touring the St. Lucie River as it passes through downtown Stuart, Nelson said the problems can be traced to Florida’s history of diverting water to the ocean.

“We need to repair 75 years of diking and draining, but that takes time,” he said. He called on Florida’s Legislature to spend money approved by state voters for environmental projects such as purchasing land around Lake Okeechobee for water storage instead of diverting the funds to pay for administrative costs. Rubio is scheduled to visit the area Friday.

When Gov. Rick Scott declared a state emergency for the area Wednesday, he blamed the federal government for neglecting repairs to the lake’s aging dike that’s considered one of the country’s most at-risk for imminent failure. On Thursday, he amended the emergency declaration, adding Lee and Palm Beach counties. Palm Beach County is located directly south of the existing emergency area, while Lee County is located on Florida’s Gulf coast.

Some residents blamed Scott instead on Thursday. He hasn’t done enough to curb pollution from farms north of the lake or purchase land farther south where lake waters could be stored and cleaned, said Irene Gomes, owner of the Driftwood Motel in Jensen Beach.

An aerial photo shows blue-green algae enveloping an area along the St. Lucie River in Stuart on Wednesday. Officials want federal action along the stretch of Florida’s Atlantic coast where the governor has declared a state of emergency over algae blooms.

The algae has rapidly grown from a beach nuisance to a health concern, as one customer made plans to leave early if the algae triggered breathing issues, said Gomes, whose family has owned the motel’s turquoise-colored cabins since 1958.

“At one point, I could say to my customers, ‘Come down, it’s not at all the beaches,’ because it wasn’t toxic. Now we’re talking about health issues,” Gomes said.

Chaney, the Central Marine receptionist, said Scott should visit the area, even if he gets criticized.

“He needs to come see it himself and stop being a coward,” she said.

Scott said in a news release Thursday that the Florida Department of Economic Opportunity will immediately activate a virtual business emergency operations center to assess businesses impacted by the blooms. The program will begin to survey businesses affected by the water releases and share the results with various state and local agencies to implement appropriate disaster relief programs.

Lake Okeechobee is the largest in Florida and the second largest body of freshwater in the contiguous United States. Flooding there after a major hurricane in 1928 killed at least 2,500 people in surrounding communities of mostly poor, black farmworkers. It inspired the storm central to Zora Neale Hurston’s novel “Their Eyes Were Watching God.”

To reduce the risk of a breach in the dike built after that hurricane, the Corps of Engineers tries to keep lake water levels between 12.5 feet and 15.5 feet above sea level. Shoring up the dike will take years. Meanwhile, freshwater is released east and west of the lake into the Caloosahatchee and St. Lucie rivers.

In neighboring St. Lucie County, home to the troubled Indian River Lagoon, officials have prohibited homeowners from using fertilizer during the summer and begun working with the state to test waterways for pollution that might be linked to septic tanks.

“A lot of people want to blame Lake Okeechobee, it’s an easy target, but there are a lot of factors that contribute to the health of the lagoon,” said St. Lucie County spokesman Erick Gill.

Murky waters on southwest Florida’s Gulf Coast also are blamed on the lake’s discharges. Fort Myers-area lawmakers said Thursday that Scott should extend the state of emergency to Lee County because of water issues in the Caloosahatchee River.