A research team in China claims to have caught a ghostly particle that has haunted and teased physicists for nearly a century.

The ground breaking discovery could boost the development of future technology such as quantum laptops faster than current super computers and smartphones that can last a year on one charge.

Led by professor Fang Zhong with the Chinese Academy of Sciences’ Institute of Physics in Beijing, the team confirmed the existence of Weyl fermions after years of research, according to a statement on the academy’s website.

The Weyl fermion is a massless particle proposed in 1929 by mathematician and physicist Hermann Weyl. “You can imagine it as an extremely small magnetic bar, but with only one pole,” Dr Weng Hongming, a researcher involved in the project, told the South China Morning Post.

In nature, however small you cut a magnet, it retains north and south poles, the direction of the magnetic field which “flows” in or out at that point. With just one “pole” and no mass at all, the Weyl fermions can do many things impossible with current technology, Weng said.

This could have a dramatic effect on smartphones in particular, solving the problem of having to endless charge a device’s battery.

While current gadgets are powered by the flow of electrons through wires and circuits, these particles are heavy and cumbersome to control, leading to loss of energy. If they were replaced by Weyl fermions, a “fermionic” device could have an almost lossless flow of energized current and make high power computations while consuming barely any energy. 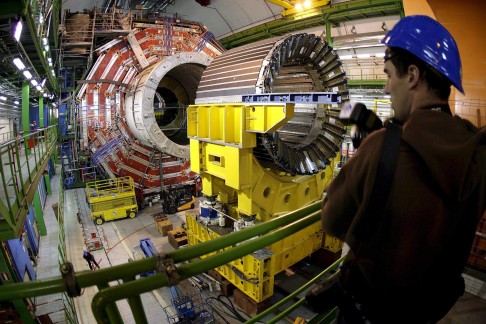 The materials that contain Weyl fermions also have applications within quantum physics because they could become superconductors. The material’s ability to maintain long quantum states with little effect or disturbance from the outside world makes it a hot candidate in helping to build a practical, error-tolerant quantum computer.

One of the biggest challenges in the construction of such a device is the fragility of the quantum state of particles such as photons which have been used to carry out quantum computations in the past. Electromagnetic interference or physical disturbance can easily cause the particles to lose or change their quantum state, potentially derailing whatever computation they were supposed to be carrying out.

“Unfortunately such a beautiful particle does not occur in the three dimensional world we live in. Its existence could only be found in another world ‘opposite’ to ours,” Weng said.

To find it, scientists around the world raced to construct an artificial realm where the Weyl fermions might exist.

In December, in collaboration with with Bogdan Bernevig’s group from Princeton university, professor Fang’s team published a paper predicting that the elusive particles could be found in a man-made material called tantalum arsenide.

Four months later they announced their first detection of the Weyl fermions by firing a beam of synchrotron radiated light onto a tantalum arsenide crystal.

Details of their experiment will be published in a paper in the journal Physical Review X run by the American Physical Society.

“Our experiment is quite exciting in a sense that we have not used a large particle collider to make the discovery. It raises the hope of make ground breaking discoveries without gigantic facilities,” Weng said.

The Chinese team’s discoveries were announced around the same time as similar studies conducted on Weyl fermions by two teams from Princeton University and the Massachusetts Institute of Technology.

Princeton professor M Zahid Hasan said they used a different approach to Weng’s team, though their discovery was using the same artificial material.

“Our experiments are not in agreement with their paper,” he told the Post.

The Chinese team said in an email that they disagreed with Hasan’s “ambiguous statement”.

“Both of our theoretical and experimental papers have been peer-reviewed and published, and even cited by his own papers.”