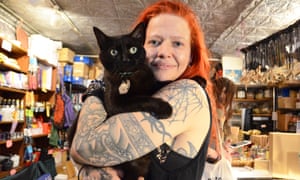 Enchantments, the oldest witchcraft store in New York, has not been open for an hour but already it’s buzzing. A middle-aged man in a neat blue dress shirt, cellphone clipped to his belt is in the back of the shop, talking to one of the employees who carves custom candles for spells. He needs luck, he explains, to close a business deal. The deal could fall apart even after a contract is signed, so the spell had to last, he carefully explains.

As the employee – perched on a stool under a sign that reads “The Witch Is In” – starts to carve intricate symbols into a huge pillar candle for the businessman, shop owner Stacy Rapp, enters in a whirlwind. A slender energetic woman, her arms and chest covered in intricate tattoos of pentagrams to ravens and her vibrant pink hair covered in a black bandanna, she seems incapable of standing still for more than a few minutes. Her arms are full of plants for the shop’s back garden, where ritual sabbaths, open to the community, are held eight times a year.

After 34 years in business in the East Village, with the recession and the rising rents of gentrification claiming so many small businesses, Enchantments’ survival might make anyone believe in magic. The carved candles are the shop’s specialty and bestselling item, but the shop also offers a fully stocked apothecary with everything from mugwort to rosehips, an entire binder of custom oils and incense and a large selection of books. Behind a glass case in front of the cash register are a variety of tarot cards and silver occult jewelry, a shelf of statuettes of gods and goddesses of every ilk adorns one side of the shop and behind the front door, a small altar is tucked out of the way of customers’ feet.

The shop does not perform spells, Rapp tells me, after leading me to a quiet backroom away from the heady smell of the incense. The shop provides supplies that people use to perform a spell. Enchantments strictly sells supplies for good magic, Rapp explains, which is one reason to which she attributes its continuing success. The shop puts out positive energy, so positive energy comes back to it, she explains. The bestsellers are uncrossing candles, candles that have been specially carved to remove a block in luck or life, to help people get unstuck when things are not going right. The candles, which in addition to uncrossing can be carved for everything from love to money, sell briskly, with an average of 25 to 30 large $30 pillar candles purchased each day. Books on the occult are the second bestselling item, Rapp says with a smile, glad that in the modern age people still like to read a physical book. 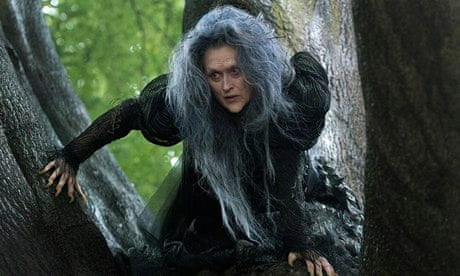 Spellbound: why witchcraft is enchanting a new generation of teenage girls

Customers cut across genders, ages and professions. “We get doctors, lawyers, bartenders, people who have been practicing pagans for 20 years and people who have never done any of this before in their life,” says Rapp. Part of the popularity of witchcraft comes from people looking for a spiritual practice that gives them a measure of control, explains Rapp.

That need for control may also be the reason the shop is not greatly affected by economic downturns. If anything, having a variety of spells focused on drawing money can have an appeal in uncertain times. “I think with the current economic times people are looking for something that has a much more active feel to it, like I can make things happen as opposed to some random force in the universe can make things happen,” Rapp explains. The shop also sells a variety of small candles and tiny packets of incense for a few dollars to cater to smaller budgets, like for those who come to the shop for help with finding a job.

Nothing can be created out of thin air, Rapp says, so lighting a candle or burning some incense won’t manifest a million dollars, but it can help give a boost to a job search, she explains. “The idea of magic is that it is a proactive spirituality,” says Rapp.

Rapp also attributes part of witchcraft’s appeal to its emphasis on strong female role models which can often be lacking in other spiritual practices. “It is much more balanced in terms of male and female energy and you have strong female energies,” says Rapp.

Not everyone is charmed by the pink-haired witch of East 9th Street and her egalitarian spiritual musings. People have called the shop in the past to tell employees that they are going to hell and are in league with the devil, says Rapp. When an article on the shop ran alongside photos of Rapp years ago, men would call the shop proposing to marry her in order to save her soul. “I was young back then,” Rapp says with a twinkle of amusement in her eye. Fortunately the phone calls are not too frequent these days. “There is no listing for witchcraft stores on Yelp,” Rapp points out, so people have to really be looking for the shop to find it. As I leave the store, a mother and daughter, both in elegant floral print dresses wait for their candles to be carved, and a young couple enters to look around. It seems people who know what to look for have no trouble finding Enchantments.