Ten-day military exercise, Anaconda-2016, will involve 31,000 troops and thousands of vehicles from 24 countries 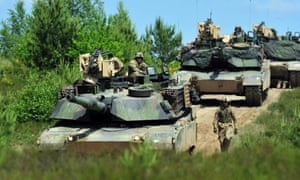 The largest war game in eastern Europe since the end of the cold war has started in Poland, as Nato and partner countries seek to mount a display of strength as a response to concerns about Russia’s assertiveness and actions.

The 10-day military exercise, involving 31,000 troops and thousands of vehicles from 24 countries, has been welcomed among Nato’s allies in the region, though defence experts warn that any mishap could prompt an offensive reaction from Moscow.

A defence attache at a European embassy in Warsaw said the “nightmare scenario” of the exercise, named Anaconda-2016, would be “a mishap, a miscalculation which the Russians construe, or choose to construe, as an offensive action”.

The exercise, which US and Polish officials formally launched near Warsaw, is billed as a test of cooperation between allied commands and troops in responding to military, chemical and cyber threats.
Pentagon to restore Obama’s troop cuts in Europe to address Russian aggression
Read more

It represents the biggest movement of foreign allied troops in Poland in peace time. For the first time since the Nazi invasion of Soviet-occupied Poland began on 22 June 1941, German tanks will cross the country from west to east.

Managed by Poland’s Lt Gen Marek Tomaszycki, the exercise includes 14,000 US troops, 12,000 Polish troops, 800 from Britain and others from non-Nato countries.

Multinational operations publicised so far include an airdrop involving 1,130 parachutists over the northern Polish city of Toruń on Tuesday – including 500 US troops and 230 British ones – engineers building a bridge to carry 300 vehicles over the Vistula river and a night-time “assault” involving 35 helicopters.

Marcin Zaborowski, a Polish defence analyst at the Centre for European Policy Analysis in Warsaw, said: “In Poland we see the exercise as a reassurance measure from the US and Nato. The defence needs of central and eastern Europe are real. The scope and numbers of Anaconda are no match for the Russian exercises that go on all the time just across the border.”

But Zaborowski also acknowledged that the backdrop to the exercise was “tense, and accidents can happen”.
p

Anaconda-2016 is a prelude to Nato’s summit in Warsaw on 8-9 July, which is expected to agree to position significant numbers of troops and equipment in Poland and the Baltic states.

It comes within weeks of the US switching on a powerful ballistic missile shield at Deveselu in Romania, as part of a “defence umbrella” that Washington says will stretch from Greenland to the Azores.

Last month, building work began on a similar missile interception base at Redzikowo, a village in northern Poland.

The exercise comes at a sensitive time for Poland’s military, following the sacking or forced retirement of a quarter of the country’s generals since the nationalist Law and Justice government came to power in October last year.

So harsh have the cuts to the top brass been that the Polish armed forces recently found themselves unable to provide a general for Nato’s multinational command centre at Szczecin.
Russia is more dangerous than Isis, says Polish foreign minister

Insiders say morale has fallen to an all-time low since the appointment of Antoni Macierewicz as defence minister.

Professional soldiers are particularly worried about a lack of clarity surrounding the creation and role of a 17-brigade territorial army, drawn in part from the 35,000 members of Poland’s gun clubs and paramilitary groups, some of which, it is feared, are linked to the country’s racist football hooligans. Two of the volunteer brigades are set to assist the professional Polish army during Anaconda.

The Guardian understands from military sources that there has been little consultation over politicians’ long-term vision for the volunteers, described last week by the plenipotentiary minister Grzegorz Kwaśniak as “a fifth force after land, sea, air and special forces”.

A western defence expert confirmed that there was concern about government interference in Poland’s military. “Poland is highly regarded internationally. In the past 15 years, they spent a lot of money and created one of the best armies in the region. They made big sacrifices in Afghanistan. They lost 40 soldiers. It is not clear what the government thinks it needs to improve,” he said.