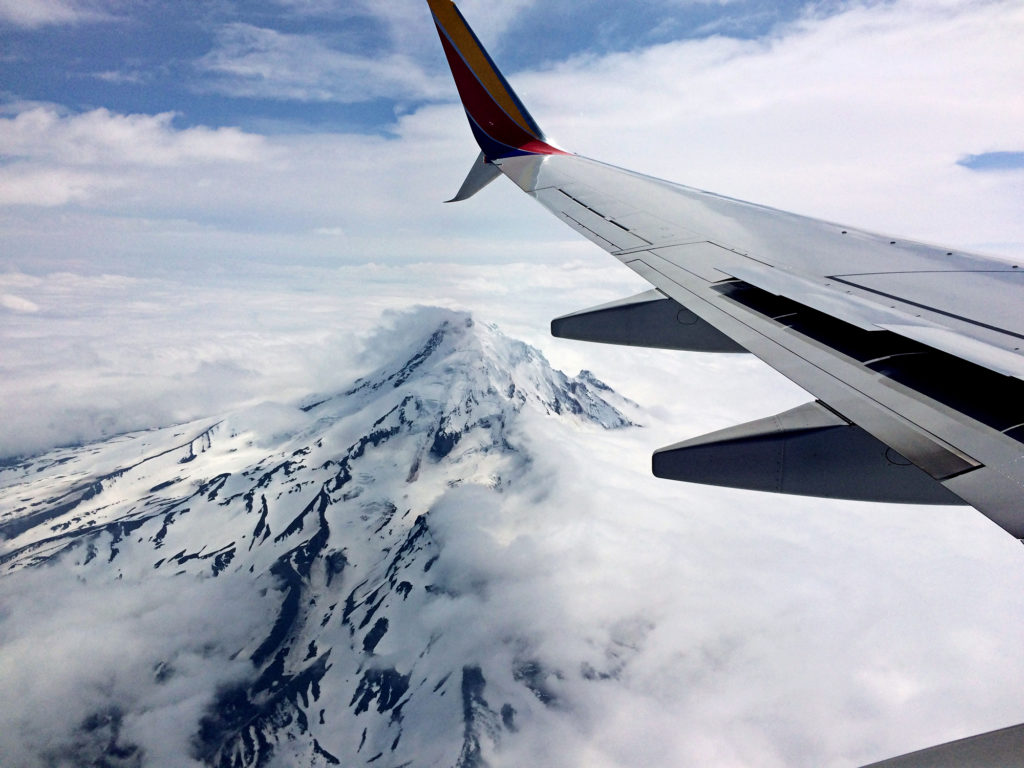 A few weeks back, we heard news of an small earthquake swarm underneath Mount St. Helens. Now, media-driven hyperbole aside, that swarm was business-as-usual for a Cascade volcano, where magma slowly rises back into the upper parts of the system. So, it should be no surprise when other volcanoes in the range show similar behavior. That’s what we might be seeing right now at St. Helens’ southern neighbor, Oregon’s Mt. Hood, where the USGS has noticed a swarm of small earthquakes (all less than M2) that started on Sunday.

It has been over 200 years since Hood’s last eruption, a period that is referred to as the “Old Maid” eruptive period when a small lava dome was formed just off the volcano’s summit. This activity produced some pyroclastic flows that swept down the southeastern sides of the volcano, along with some lahars (volcanic mudflows) that headed down some of the rivers that come off of Hood, like the Sandy River (see below). The Sandy got its name thanks to what may have been lahar deposits in its channel when Lewis and Clark came by a few years after the eruptions. A few small explosions likely occurred during the 1800s, but since about the 1860s, the volcano has been completely quiet. 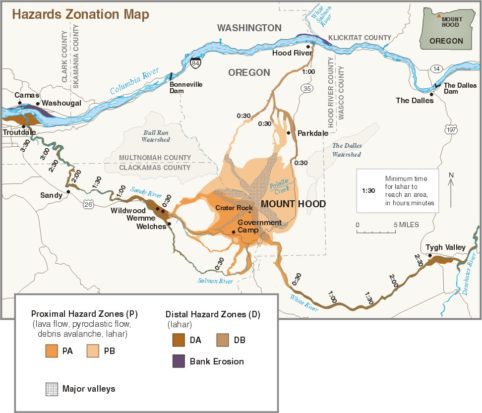 Today, the biggest threat from Hood is still lahars, which could make it all the way into the Columbia River and impact towns along the reach of those rivers’ drainages (see above). A close second would be the threat to air travel in and out of Portland. I flew into Portland just the other day and you almost feel like you could reach out and touch the volcano (see above). Any sufficiently ashy eruption could shut down the airport for extended periods (along with potentially points east of the volcano).

Right now, the earthquake swarm at Mt. Hood is centered just to the south of the main edifice (see below) and most of the earthquakes are between 3 and 5 kilometers below the surface. This is likely the zone where magma is being staged as it ascends from its source. Research by Adam Kent and others (including myself) has found that the magmatic system beneath Hood is likely dominated by a big pile of high silica crystals and magma (the crystal mush) that then interacts with new, hotter and less silica-rich magma that intrudes, producing a hybrid magma that compositionally is in between the two. These earthquakes may be a sign of new magma rising and stalling in that “crystal mush”—but very little of the time is the system in a state that it can erupt.

UPDATE (2:30 pm): Just to be abundantly clear, this swarm may very well be tectonic in origin — that is, it might be along some of the many faults that exist on the south side of Hood. Now, those faults might be moving from changes in pressure due to new intrusions or changes in the hydrothermal system. So, all signs of a still-active magmatic system but it’s not necessarily directly from magma movement. So, no need to panic.

EVER BIGGER UPDATE (4 pm): The USGS Cascades Volcano Observatory just posted their interpretation of these earthquakes: these are likely tectonic in origin rather than directly related to the magmatic system at Hood. The evidence is the location of the swarm (not directly under Hood) and the fact that previous swarms off the main volcano have turned out to be mainly tectonic in origin. Quite a few regional faults run in this area south of Hood, so it isn’t surprising. So, sleep well Portlanders, it appears that Hood is just adjusting rather than really seeing any new magma intruding. The depth of these earthquakes means it might be all happening near the top of the magma body/mush, but faults moving, not magma (unlike what recently happened at Mount St. Helens).

Hood has experienced multiple swarms like this over the last few decade. Just like at St. Helens, these earthquakes could be merely small movement on faults driven by pressure from new magma or even changes in water/gas flow within the volcano’s hydrothermal system. Many of these Cascade volcanoes have these bouts of earthquakes and tremor, much to the delight of the media. A few years back, Mt. Baker in northern Washington had an uptick in tremor that caught people’s attention, but that shaking has not led to any eruption (or even any change in Baker’s current quiet state).

Remember, the Cascade volcanoes are remarkably quiet right now, but that doesn’t mean that we are “overdue” for any activity. They will, eventually, come back to life and we should be prepared for those new eruptions. However, as always, expect that volcanoes like Hood and St. Helens will occasionally remind us that they are potentially active volcanoes (that’s why we monitor them closely). No need to panic, but definitely something to keep us on our toes for the next real blast.