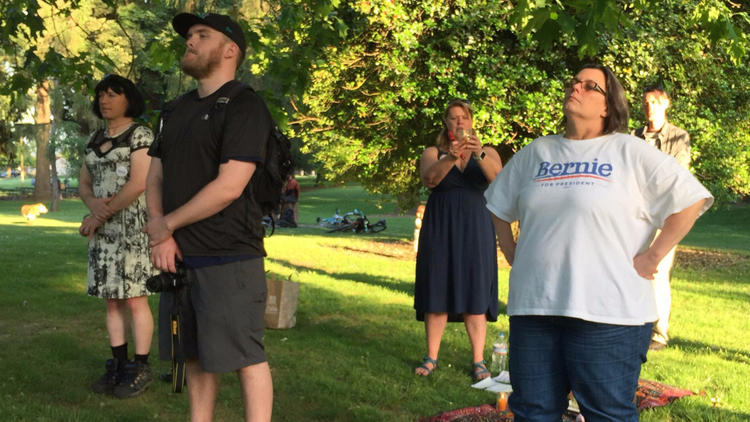 Attending a rally for Bernie Sanders usually involves long lines and security screenings, but that wasn’t the case at an intimate, informal event Friday evening supporting the Vermont senator’s presidential campaign in a park here.

Participants were “smudged,” meaning the smoke from the sweetgrass was wafted over them before they could enter the sacred circle and begin a Wiccan ritual to support Sanders ahead of Oregon’s primary on Tuesday.

“Welcome to the ‘Feeling the Bern ritual,’” Leigha Lafleur, 41, told the gathering  as she prepared to lead them in the “amplification of positive energy of Bernie Sanders and the progressive movement.”

The “ballot box” at the Wiccan ritual held in Portland in support of Bernie Sanders.

There are lots of ways to support a political candidate, from making phone calls to donating money. Some turn to prayer, Christian or otherwise. Add Wiccan rituals to the list.

Lafleur, a patent agent, has already hosted “Beanies for Bernie” knitting parties and helped out at the senator’s rallies. But she had never performed a Wiccan ritual for Sanders before, and if it was going to happen somewhere, it would be here in Portland, a place she described as a much more welcoming community than where she grew up in Michigan.

She advertised the event on a Sanders volunteer website, calling on Wiccans, pagans, goddess worshipers, atheists or anyone who is spiritually open-minded to “engage with a community of like minded individuals.” Participants were asked to bring a canned good for the Oregon Food Bank.

The event caught the eye of a handful of reporters, as well as a man who said he runs a YouTube channel called Laughing at Liberals. In the end, observers were almost as numerous as participants, who included a 24-year-old mother who does Tarot readings and brought her toddler, a 43-year-old researcher, a 53-year-old semi-retired chef and a 36-year-old food service employee with his dog.

They gathered around a small rug with four candles, flowers and an imitation ballot box adorned with Bernie stickers. Each person was handed a replica ballot and took turns declaring what they would like to see changed — ending private prisons, bringing back Glass-Steagal financial regulations, labeling genetically modified foods and increasing access to college. A reporter for a local alternative weekly who participated in the ritual asked for more transparent public records laws.

“We can’t just be putting all our energy into Bernie, and when the election cycle is over, then what?” she said.

When they were finished, they passed around cherries and ginger lemonade.

“Anyone who wants more cherries is free to have them,” Lafleur said, and the ritual was over.