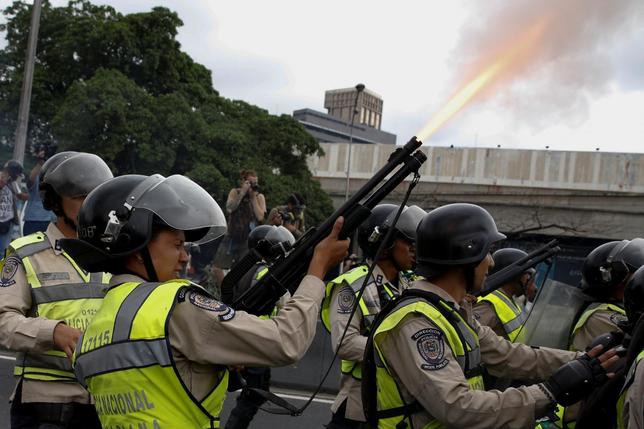 The United States is increasingly concerned about the potential for an economic and political meltdown in Venezuela, spurred by fears of a debt default, growing street protests and deterioration of its oil sector, U.S. intelligence officials said on Friday.

In a bleak assessment of Venezuela’s worsening crisis, the senior officials expressed doubt that unpopular leftist President Nicolas Maduro would allow a recall referendum this year, despite opposition-led protests demanding a vote to decide whether he stays in office.

But the two officials, briefing a small group of reporters in Washington, predicted that Maduro, who heads Latin America’s most ardently anti-U.S. government and a major U.S. oil supplier, was not likely to be able to complete his term, which is due to end after elections in late 2018.

They said one “plausible” scenario would be that Maduro’s own party or powerful political figures would force him out and would not rule out the possibility of a military coup. Still, they said there was no evidence of any active plotting or that he had lost support from the country’s generals.

The officials appeared to acknowledge that Washington has little leverage in how the situation unfolds in Venezuela, where any U.S. role draws government accusations of U.S.-aided conspiracies. Instead, the administration of President Barack Obama wants “regional” efforts to help keep the country from sliding into chaos.

“You can hear the ice cracking. You know there’s a crisis coming,” one U.S. official said. “Our pressure on this isn’t going to resolve this issue.”

Maduro hit back on Friday night, blasting what he said was a meeting “to conspire against Venezuela” in Washington.

“Washington is activating measures at the request of Venezuela’s fascist right, who are emboldened by the coup in Brazil,” he said during a televised broadcast in reference to this week’s impeachment of fellow leftist Dilma Rousseff in Brazil.

Maduro, 53, then declared a 60-day state of emergency which includes the “necessary measures” to protect Venezuela in the event of a foreign attack, he said, without providing details. [L2N18B014]

Mobs in Venezuela have stolen flour, chicken and even underwear this week as looting increases across the crisis-hit OPEC nation where many basic products have run short, and the U.S. officials said this could spiral into widespread unrest. Soldiers fired tear gas at stone-throwing protesters on Wednesday as Venezuela’s opposition marched to pressure electoral authorities into allowing a recall referendum against Maduro.

Maduro has sworn he will not be forced out before his term expires in 2019 and accuses the opposition of seeking a coup against him to destroy the socialist legacy of his predecessor, the late Hugo Chavez. Washington has had an acrimonious relationship with Caracas for years, especially following U.S. support for a short-lived 2002 coup against Chavez.

The U.S. officials insisted that the United States was not “rooting against” Caracas but just wanted to see the crisis defused.

They expressed concern for a possible spillover to its neighboring countries, especially Colombia, but said most of the instability would be “self-contained” to Venezuela.

Such intelligence assessments help U.S. policymakers decide on how to respond. There was no immediate comment from the White House. The administration quietly sought last year to improve relations but the imposition of new U.S. sanctions and drug-related indictments stoked fresh tensions.

The officials cited the risk of a Venezuelan debt default. Maduro’s government has consistently paid its debt on time and has slammed market fears of a default as an international smear campaign.

Weak oil markets and an unraveling socialist economy have fanned concerns that the Venezuelan oil firm PDVSA will be unable to make nearly $5 billion in bond payments between now and the end of the year.