Ramón Muchacho, Mayor of Chacao in Caracas, said the streets of the capital of Venezuela are filled with people killing animals for food.

Through Twitter, Muchacho reported that in Venezuela, it is a “painful reality” that people “hunt cats, dogs and pigeons” to ease their hunger. 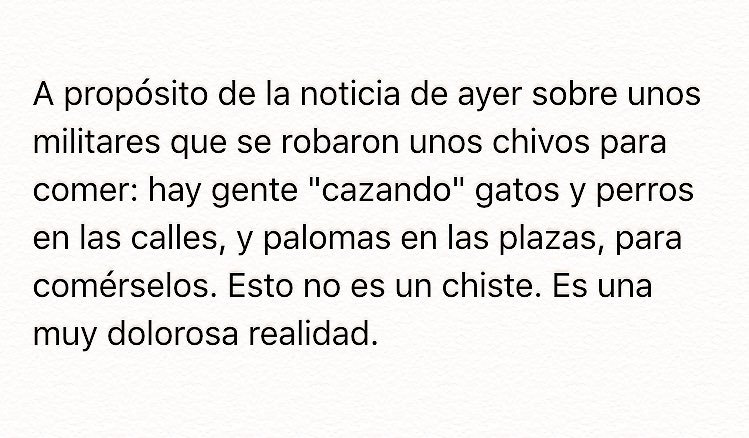 People are also reportedly gathering vegetables from the ground and trash to eat as well.

The crisis in Venezuela is worsening everyday due in part to shortages reaching 70 percent. This to go along with the world’s highest level of inflation.

The population’s desperation has begun to show, with looting and robberies for food increasing all the time. This Sunday, May 1, six Venezuelan military officials were arrested for stealing goats to ease their hunger, as there was no food at the Fort Manaure military base.

The week before, various regions of the country saw widespread looting of shopping malls, pharmacies, supermarkets and food trucks, all while people chanted “we are hungry.”

The Venezuelan Chamber of Food (Cavidea) said many businesses only have 15 days worth of inventory. Production has been effected as a result of a shortage of raw materials, as well as exhausted national and international supply resources.

Supermarket employees confirmed food does not arrive at the same rate as it did before, and that people’s inability to get enough is a daily struggle.

Supermarkets are registered into a system in such a way that they are not permitted to sell Venezuelans food 15 days since their purchase of the same product. As a result, long food lines have formed all over the country, with many people reselling their share to earn an “extra income.”