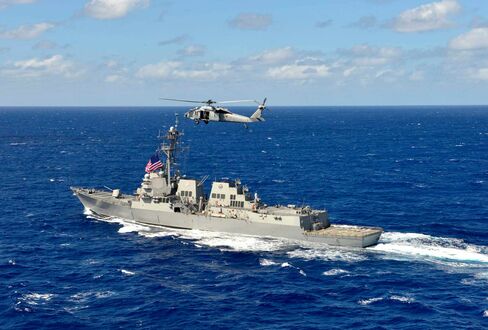 The U.S. Navy sent its third warship in less than seven months into China-claimed waters of the South China Sea as tensions rise ahead of an international court’s ruling on the territorial dispute.

The USS William P. Lawrence, a guided-missile destroyer, on Tuesday sailed within the 12-nautical-mile territorial zone around Fiery Cross Reef, a feature in the Spratly Islands where China has dumped hundreds of thousands of tons of sand and coral to create an island on which it has built an airstrip. The transit was a “freedom-of-navigation” operation by the U.S. military to demonstrate the right to fly and sail through what it considers international waters and airspace.

The reef is also claimed by the Philippines, which is contesting China’s claim to more than 80 percent of the South China Sea based on a 1947 Chinese map known as the nine-dash line, along with reefs and atolls in the waters. An arbitration tribunal hearing the case under the United Nations Convention on the Law of the Sea is expected to make a ruling by mid-2016. China has refused to participate in the arbitration, arguing that the tribunal lacks jurisdiction and that such disputes should be settled bilaterally.

The U.S. operation was first reported by the Wall Street Journal and later confirmed by the Pentagon.

The warship “threatened” China’s sovereignty and put staff and facilities on the island at risk, Foreign Ministry spokesman Lu Kang said at a briefing in Beijing Tuesday. The U.S.’s regular freedom-of-navigation operations since 1979 were “a naked challenge” to the maritime order, he said.

Lu said Chinese naval vessels followed, monitored and warned the U.S. warship. “The Chinese side resolutely opposed it, and will continue to carry out necessary measures to safeguard sovereignty and security,” he said.

The Chinese navy over the past week carried out combat drills in the South China Sea, led by the Hefei, one of the country’s most advanced missile destroyers, according to official Xinhua News Agency. Five other vessels participated, along with three helicopters and dozens of “special warfare” soldiers.

U.S. freedom-of-navigation operations challenged excessive maritime claims of 13 countries, including China, Indonesia, Malaysia, the Philippines and Vietnam, in the year that ended Sept. 30, according to a Department of Defense report.