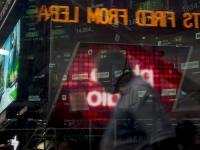 On a recent Monday in April, more than 100 executives from some of the world’s largest financial institutions gathered for a private meeting at the Times Square office of Nasdaq Inc. They weren’t there to just talk about blockchain, the new technology some predict will transform finance, but to build and experiment with the software.

By the end of the day, they had seen something revolutionary: U.S. dollars transformed into pure digital assets, able to be used to execute and settle a trade instantly. That’s the promise of a blockchain, where the cumbersome and error-prone system that takes days to move money across town or around the world is replaced with almost instant certainty. The event was created by Chain, one of many startups trying to rewire the financial industry, with representatives from Nasdaq, Citigroup Inc., Visa Inc., Fidelity, Fiserv Inc., Pfizer Inc. and others in the room.

The event — announced in a statement this Monday — marked a key moment in the evolution of blockchain, notable both for what was achieved, as well as how many firms were involved. The technology’s potential has captivated Wall Street executives because it offers a way to free up billions of dollars by speeding transactions that currently can take days, tying up capital. But a huge piece of that puzzle is transforming cash into a digital form. And while some firms have conducted experiments, the Chain event showed a large number of them are now looking jointly at a potential solution.

“We created a digital dollar” to show the group at Nasdaq an instant debit and credit on a blockchain, said Marc West, chief technology officer at Fiserv, a transaction and payments company with more than 13,000 clients across the financial industry. “This is the first time the money has moved.”

Chain is already known in some Wall Street circles for its project to help Nasdaq shift trading of non-public company shares onto a blockchain. But for the most part, it has kept relatively quiet compared with other fintech ventures.

The San Francisco-based company also used the April 11 meeting to introduce its customers and investors to Chain Open Standard, an open-source blockchain platform that the venture has been designing for more than a year, said Adam Ludwin, the company’s chief executive officer. What Chain has done is engineer the complicated elements needed for a blockchain to work, so that its customers can build custom solutions on top of that to solve business problems, he said.

“We’ve been quietly building with a whole bunch of folks for a few years,” he said. “Blockchains are networks, so we think collaboration is important, but what’s even more important than collaboration at the beginning is getting the model right.” The event was kept secret so executives could freely share nascent ideas and take risks. “The more press, the less quality of the dialogue and problem-solving,” he said.

The most common blockchain is the one supporting the digital currency bitcoin, which has been active since 2009. Financial firms have been reluctant to embrace bitcoin, however, as its anonymous users could entangle banks in violations of anti-money-laundering and know-your-customer regulations. Digital U.S. dollars, or any other fiat currency, on the other hand, doesn’t pose those risks.

Nasdaq and Citigroup partnered to explore how they can work together, said Brad Peterson, the exchange-owner’s chief information officer. He said blockchain also could be used for reference data — how specific stocks or bonds are identified across all markets, for example.

Wall Street was one of the earliest beneficiaries of computers replacing office systems. Now 30 years later, those legacy systems can be a hindrance to further technological evolution, he said.

“That’s the great opportunity — how to unlock that ability to work your way out from under the mainframe era,” he said.
While cash in a bank account moves electronically all the time today, there’s a distinction between that system and what it means to say money is digital. Electronic payments are really just messages that cash needs to move from one account to another, and this reconciliation is what adds time to the payments process. For customers, moving money between accounts can take days as banks wait for confirmations. Digital dollars, however, are pre-loaded into a system like a blockchain. From there, they can be swapped immediately for an asset.
“Instead of a record or message being moved, it’s the actual asset,” Ludwin said. “The payment and the settlement become the same thing.”

Ian Lee, head of Citigroup’s global lab network and acceleration fund, said one of the first areas of research Citigroup undertook when it began studying blockchain was how digital cash could be used. He was impressed with the variety of clients Chain brought together, as collaboration on Wall Street is rare. A lot of companies are facing the same problems with how to make blockchain a reality for their business, he said.

“While blockchain technology has a lot of potential, it will need to integrate with and co-exist with the financial system that exists today,” he said.

Ludwin said blockchain has been validated on Wall Street, and now it’s time to focus on creating solutions.

“Putting it all together is no small amount of work, nor is re-engineering business processes within large organizations,” he said. “This isn’t ‘financial engineering.’ This is software engineering that is going to reshape financial services.”