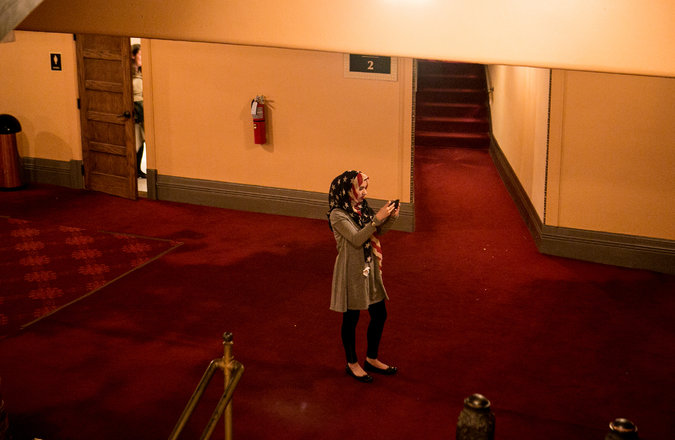 WASHINGTON — American Muslims are watching in growing horror as Donald J. Trump and Senator Ted Cruz battle for the Republican presidential nomination, outdoing each other with provocative proposals that have included Muslim registries, immigration bans and fleets of police patrolling their neighborhoods.

With round tables, summit meetings and news releases falling on deaf ears, national advocacy groups are planning to fend off policies they consider hostile to Muslims with a more proactive strategy: driving up the Muslim vote.

Organizations like the Council on American-Islamic Relations, known as CAIR, the Islamic Circle of North America and the U.S. Council of Muslim Organizations are encouraging mosques to turn themselves into voter registration centers before the November election so that Muslims can make their voices heard at the polls. Registration drives are expected to ramp up significantly in June, during Ramadan, when attendance at Islamic centers peaks.

“The fear and apprehension in the American Muslim community has never been at this level,” said Ibrahim Hooper, a spokesman for CAIR. “The anti-Islamic tidal wave is spurring civic participation.”

Muslims tended to lean Republican as recently as 2000, but a backlash after the Sept. 11, 2001, attacks, along with the Middle East policies of the George W. Bush administration, has led to a gradual shift toward the Democrats. A Pew Research Center survey last year found that 70 percent of American Muslims identify with the Democratic Party, while just 11 percent consider themselves to be Republicans.

Although Muslims make up only about 1 percent of the population in the United States, civil rights groups have set a goal of registering a million new voters. Efforts will be focused on swing states such as Ohio and Florida that have large Muslim populations, potentially giving the small but united voting bloc the power to tilt close elections.

“The best answer to this anti-Muslim rhetoric is engagement in the political process,” said Naeem Baig, the president of the Islamic Circle of North America. “It is a matter of survival for the American Muslim community.”

Like many Muslims, Mr. Baig said that the vitriol directed at Americans who practice Islam is the worst that he can remember. Violence against Muslims and attacks on mosques increased last year, and Muslim parents say their children are being bullied at school. Even the voter registration push has drawn criticism in some circles, with websites such as Creeping Sharia lamenting greater Muslim engagement in American politics and suggesting that “the problem with CAIR’s initiative is that no one who follows the Quran can honestly claim to follow the Constitution.”

The tenor of the presidential campaign is being blamed for fanning such flames, with much of the responsibility for this being placed on Mr. Trump.

This month, Mr. Trump suggested in an interview that “Islam hates us,” and he angered many Muslims last year with his idea of a moratorium on Muslim immigrants. He has also waxed nostalgic about a myth of an American general who executed Muslims with bullets dipped in pig blood, citing it as an example of old-fashioned toughness.

Mr. Cruz, a Republican from Texas, has also been accused of stirring anti-Muslim sentiment. Last week he appointed Frank Gaffney, who is known for his conspiracy theories about the spread of Shariah law in the West, to his foreign policy team. And after the terrorist attacks by the Islamic State in Brussels this week, Mr. Cruz went further than Mr. Trump has gone by calling on the authorities to “patrol and secure Muslim neighborhoods.”

Such language is not going unnoticed by American Muslims, and leaders at the Dar Al-Hijrah Islamic Center in Virginia have been holding voter education workshops. “We’re seeing an energy that is largely motivated by anti-Trump sentiment,” said Colin Christopher, the deputy director of government affairs at Dar Al-Hijrah. “The advantage of this is our community is going to put more resources to putting young leaders into the process.”

It is too soon to assess whether such voter registration efforts are succeeding, but CAIR says it is seeing a lot of energy behind the movement. Its polls have shown that about three-fourths of Muslims who are registered to vote planned to do so during the primary election season, and two-thirds of them expected to vote for Democrats.

Ghazala Salam, the president of the American Muslim Democratic Caucus of Florida, estimated that voter registration of Muslims in her state was up by almost 20 percent from a year ago and said that she saw a lot of Republicans changing party affiliations. She said that Muslim activists were setting up registration tables at luncheons and festivals and that anxiety about the election was spurring more people to sign up. “The community is very anxious and afraid about our security with all the rhetoric that we hear,” Ms. Salam said.

In cases where potential voters are reluctant to register, Reema Ahmad, a community organizer in Chicago, reminds them what is at stake this year. She regularly stands outside mosques to recruit new voters and sometimes will wonder aloud as prayer goers whisk by if they really want Mr. Trump to be president. It tends to stop them in their tracks.

“It’s one of the main tactics I employ,” Ms. Ahmad says, noting the importance of this election for Muslims. “If you’re not at the dinner table, you’re on the menu.”