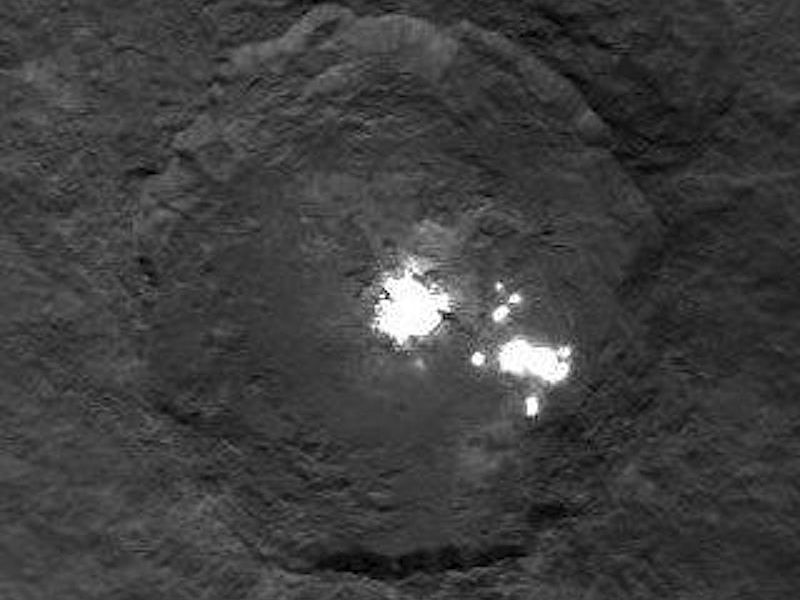 Nestled 250 million miles from Earth, between the orbits of Mars and Jupiter, is the largest object in the asteroid belt: Ceres.

It’s home to some of the most puzzling features ever observed in our solar system, including a giant pyramid that dwarfs many mountains on Earth and several dazzling bright spots inside a 50-mile-wide crater.

Now, recent research, led by astronomers at the INAF-Trieste Astronomical Observatory in Italy, has discovered that these unique bright spots are doing something unexpected: They’re changing.

And it could point to some of the most compelling evidence yet for a huge underground ocean sloshing beneath Ceres’ rocky shell.

We first got a good look at Ceres and its perplexing landscape last year, when the Dawn spacecraft fell into orbit around it. But Dawn isn’t the only instrument scientists are using to study Ceres..

Using the European Southern Observatory’s 3.6-meter telescope, the team noticed that Ceres’ spots appear to vary in brightness over time — growing brighter before dimming back down, like a lightning bug on a summer night.

Interestingly, the spots are brightest when they’re on the day side of Ceres, facing the sun. This has led the team to suspect that these surprising changes are the result of sublimation, when a solid becomes a gas.

Heat from the sun’s light sublimates certain materials, which then forms a visible misty haze above the spots, the team reported in the Monthly Notices of the Royal Astronomical Society.

When additional sunlight then strikes the mist, it scatters the light, giving off a brilliant glow that makes the spots appear brighter.

The mist, however, is only temporary. It seems to evaporate within a few hours after forming. Without any mist hanging over them, the spots then appear to dim, which explains the variable changes the team observed.

But there’s one thing the mist doesn’t explain: What’s fueling it in the first place.

A grand ocean in space

Ceres has been around since the start of our solar system, which makes it roughly 4.6 billion years old.

If these spots have been shooting off mist for that long, then they should have disappeared by now, unless some source was continuously supplying the material.

So what’s going on?

The team suspects that a vast underground ocean could be swelling up through cracks in Ceres’ crust, which formed after a powerful impact.

“It is assumed that something comes out from [the] interior of the planet where there is a large amount of water and that can evaporate filling the crater and eventually dispersed under the action of solar radiation,” the team said in a press release.

If there’s liquid water underneath Ceres’ surface, then that means that there must also be a heat source.

Ceres is turning out to be a far more interesting world than we thought.