Attention deficit hyperactivity disorder (ADHD) is vastly over-diagnosed with many cases simply immature children who are the youngest in their class, a new study suggests.

The term ADHD is often used for a collection of behavioural problems linked to poor attention span including impulsiveness, restlessness and inability to concentrate.

Around three to seven per cent of British children are believed to have ADHD, about 400,000, with many being prescribed drugs to try and improve their concentration at school.

“Our findings emphasize the importance of considering the age of a child within a grade when diagnosing ADHD and prescribing medication to treat ADHD” Dr Mu-Hong Chen, Taipei Veterans Hospital

Prescriptions for drugs like Ritalin have doubled to 922,000 a year in the last decade for children diagnosed with ADHD but such medications can cause adverse reactions such as weight loss, liver toxicity, and suicidal thoughts, and in the short term may suppress pubertal growth.

Now a study of nearly 400,000 children between four and 17 years old in Taiwan has shown that the percentage of youngsters diagnosed with ADHD significantly changes depending on month of birth. Where just 2.8 per cent of boys born in September have the condition, the figure jumps to 4.5 per cent in August, rising steadily over the school year. For girls it rose from 0.7 to 1.2 per cent. 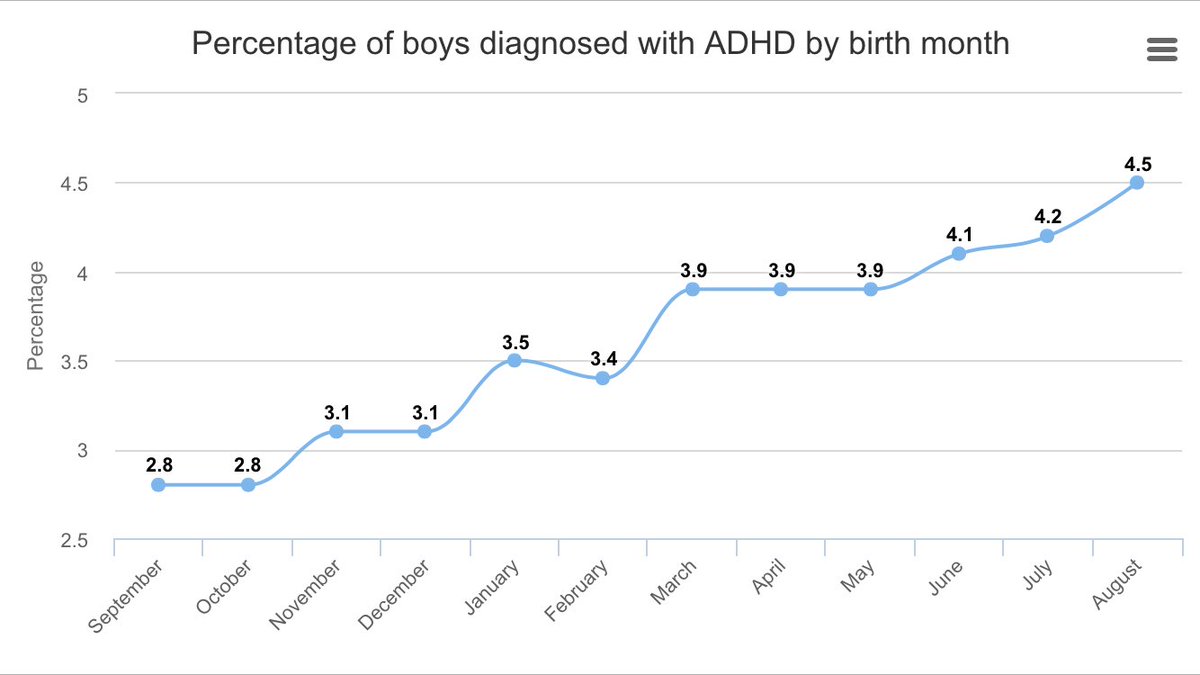 They authors say that many cases may be caused by teachers comparing the behaviour of more mature children to those of youngsters who are up to a year younger.

“Attention-deficit hyperactivity disorder (ADHD) is the most commonly diagnosed neurodevelopmental disorder. ADHD begins in childhood and manifests as an inability to marshal and sustain attention and modulate activity level and impulsive actions,” said lead author Dr Mu-Hong Chen, of the Department of Psychology at Taipei Veterans General Hospital in Taiwan.

“When looking at the database as a whole, children born in August were more likely to be diagnosed with ADHD and/or receive ADHD medication than those born in September.

“Relative age, as an indicator of neurocognitive maturity, may play a crucial role in the risk of being diagnosed with ADHD and receiving ADHD medication among children and adolescents.

“Our findings emphasize the importance of considering the age of a child within a grade when diagnosing ADHD and prescribing medication to treat ADHD.”

A recent survey of Cambridge University students revealed that one in ten has taken drugs such as Ritalin  Photo: Alamy

The NHS describes the disorder as being ‘a group of behavioural symptoms that include inattentiveness, hyperactivity and impulsiveness’.

Common symptoms include a short attention span, restlessness or constant fidgeting and being easily distracted, the health service says.

Many people with ADHD also have learning difficulties and other problems such as sleep disorders. The condition is normally diagnosed between the ages of three to seven.

However some neuroscientists believe the condition does not exist at all arguing that most people will display some, or all of the sighs during their lifetime.

Dr Kuben Naidoo, consultant psychiatrist and chairman of ADHD Foundation, said: “The study highlights the importance of ensuring the assessment for ADHD is rigorous and relies on a variety of sources of information that support the clinician in deciding whether the diagnosis is met.

In the UK setting the assessment and diagnosis of ADHD across the lifespan is robust and relies on information gathered from a number of sources including the family and school.

This is then coupled with information obtained from a clinical interview by a specialist paediatrician or psychiatrist. The option to treat with medication is not taken lightly and consideration is also given to psychological strategies to support the individual. This decision on the type of treatment would be influenced by the degree of impairment experienced by the individual.

The issue is not as simple as assuming that age, as an indicator of neurocognitive maturity, influences ADHD symptoms as we do see a significant number of adults presenting to psychiatric services for the first time with symptoms of ADHD.”

The research was published in the Journal of Pediatrics.