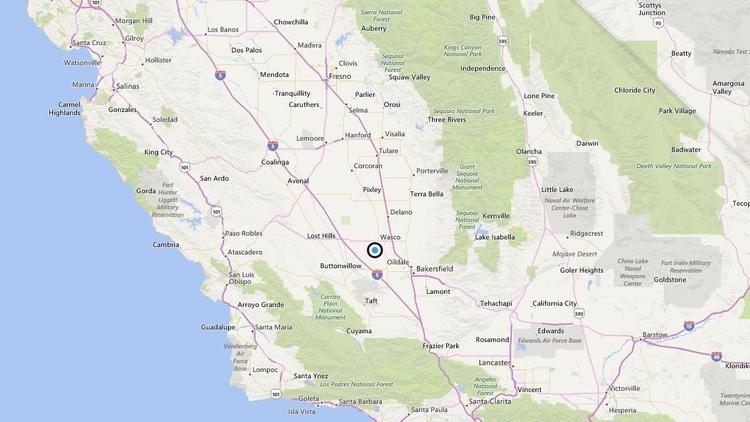 A magnitude 4.8 earthquake was reported Tuesday afternoon three miles from Wasco, Calif., according to the U.S. Geological Survey.

“It was short, brief, but strong — kind of a violent hit,” said Capt. Andrew Kennison of the Kern County Fire Department, which also serves the city of Wasco.

The San Joaquin Valley city is located about 25 miles northwest of Bakersfield and includes the Wasco State Prison, which houses about 4,900 inmates.

“We surveyed the town – no broken windows, no structural damage,” Kennison added. “We haven’t had any damage.”

The temblor occurred at 4:02 p.m. Pacific time. According to the USGS, strong shaking was limited to the area around Wasco. Lighter shaking was felt in Bakersfield, Delano and Porterville.

The earthquake was initially reported as a magnitude 4.9, but the USGS later downgraded it.

The Kern County Fire Department deployed teams of firefighters to canvass area neighborhoods and identify possible damage, said James Dowell, a department spokesman. As of 4:45 p.m., no damage had been reported.

According to the USGS, the epicenter was four miles from Shafter, 11 miles from McFarland and 15 miles from Rosedale.

In the last 10 days, there has been one earthquake of magnitude 3.0 or greater centered nearby.