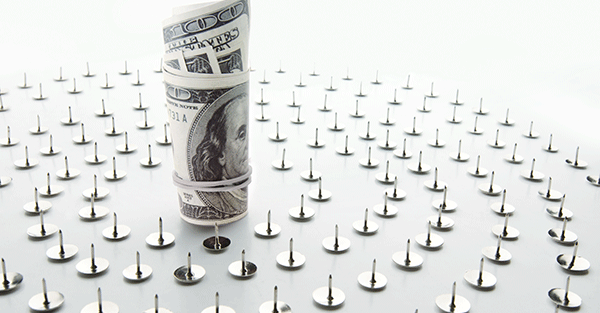 This is starting to become very concerning.

The momentum to “ban cash”, and in particular high denomination notes like the 500 euro and $100 bills, is seriously picking up steam.

On Monday the European Central Bank President emphatically disclosed that he is strongly considering phasing out the 500 euro note.

Yesterday, former US Treasury Secretary Larry Summers published an op-ed in the Washington Post about getting rid of the $100 bill.

Prominent economists and banks have joined the refrain and called for an end to cash in recent months.

The reasoning is almost always the same: cash is something that only criminals, terrorists, and tax cheats use.

In his op-ed, Summers refers to a new Harvard research paper entitled: “Making it Harder for the Bad Guys: The Case for Eliminating High Denomination Notes”.

That title pretty much sums up the conventional thinking. And the paper goes on to propose abolishing, among others, 500 euro and $100 bills.

Personally I find this comical.

I can just imagine a bunch of bureaucrats and policy wonks sitting in a room pretending to know anything about criminal activity.

It’s total nonsense. As long as there has been human civilization there has been crime. Crime pre-dates cash. And it will exist long after they attempt to ban it.

Perhaps even more hilarious is that many of these bankrupt governments have become so desperate for economic growth that they now count illegal drug activity and prostitution in their GDP calculations, both of which are typically transacted in cash.

So, ironically, by banning cash these governments will end up reducing their own GDP figures.

What’s really behind this? Why is there such a big movement to ban something that is used for felonious purposes by just a fraction of a percent of the population?

Cash, it turns out, is the Achilles’ Heel of the financial system.

And despite having created massive bubbles and enabled extraordinary amounts of debt, their policies aren’t working.

Especially in Europe, the hope of stoking economic growth (and even the sickening goal of inflation) has failed.

So naturally, since what they’ve been trying hasn’t worked, their response is to continue trying the same thing… and more of it.

Interest rates across the European continent are now negative.

And even in the United States, the Federal Reserve has acknowledged that negative interest rates are being considered.

They have no other choice; raising rates will bankrupt the governments they support and derail any fledgling economic growth.

Look at how low interest rates are in the US– and yet 4th quarter GDP practically ground to a halt. They simply cannot afford to raise rates.

As global economic weakness continues to play out, central banks will have no other option but to take interest rates even further into negative territory.

That said, negative interest rates will be the destruction of the financial system.

Because sooner or later, if banks have to pay negative wholesale interest rates to each other and to the central bank, then eventually they’ll have to pass those negative rates on to their customers.

Many banks have already started doing this, especially on larger depositors.

We’ve seen this in Europe where some banks charge their customers negative interest to save money, and in some extraordinary circumstances, pay other customers to borrow money.

There’s a certain point, however, when interest rates become so negative that no rational person would hold money in the banking system.

Eventually people will realize that they’re better off withdrawing their money and holding physical cash.

Sure, cash doesn’t pay any interest. But it doesn’t cost any either.

Clearly it would make more sense to buy a safe and hold most of that money in cash.

Problem is, the banks don’t have the money.

For starters, there’s literally not enough cash in the entire financial system to pay out more than a fraction of all bank deposits.

More importantly, banks (especially in the US and Europe) are extremely illiquid.

They invest the vast majority of your deposit in illiquid loans or securities of dubious long-term value, whatever the latest stupid investment fad happens to be.

And many banks have been engaging in a substantial balance sheet shift, rotating bonds from what’s called “Available for Sale” to “Hold to Maturity”.

This is an accounting trick used to hide losses in their bond portfolios. But it also means they have less liquidity available to support bank customer withdrawal requests.

The natural side effect of negative interest rates is pushing people to hold money outside of the banking system.

Yet it’s clear that a surge of withdrawal requests would bring down that system.

But since central banks have no other choice than to continue imposing negative interest rates, the only logical option is to ban cash and force consumers to hold their money within the banking system.

Make no mistake, this is absolutely a form of capital controls. And it’s coming soon to a banking system near you.

PS. Clearly a trend with this much momentum requires some deliberate and measured action if you don’t want your savings trapped.

We’ll discuss this in our upcoming webinar.

I hate to belabor the point, but it should be obvious that these things are happening, quickly, and I can promise that you’ll get a ton of great information and solutions with the small investment of your time.

Our goal is simple: To help you achieve personal liberty and financial prosperity no matter what happens.

Get the tools and information you need to prepare yourself for what’s coming.

Read More:Norway Joins The Dark Side As 666 Comes To America