Ir has been a couple of months since WUWT has checked in on the progress of solar cycle 24. Right now, the sun is in “cue ball” mode, with no large visible sunspots as seen below in the most recent Solar Dynamics Observatory (SDO) photo: 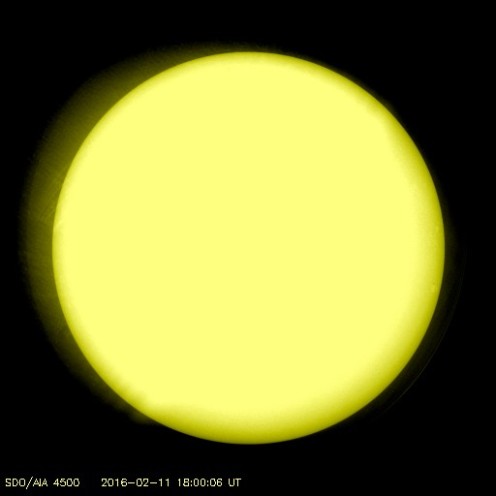 Since there is a new analysis out at Pierre Gosselin’s website by Frank Bosse and Prof. Fritz Vahrenholt, I thought it would be a good time to do an update. They write:

[The sun was] rather quiet in January. The determined solar sunspot number (SSN) was 56.6, which is 71% of the mean this far into the period, calculated using the 23 previously measured solar cycles.

Figure 1: Plot of the monthly sunspot number so far for the current cycle (red line) compared to the mean solar cycle (blue line) and the similar solar cycle no. 5 (black).

They also have a prediction, read about it here. Full report (in German) here.

As you can see from the plots in Figure 1, the current level of activity of solar cycle 24 seems close to that of solar cycle number 5, which occurred beginning in May 1798 and ending in December 1810 (thus falling within the Dalton Minimum). The maximum smoothed sunspot number (monthly number of sunspots averaged over a twelve-month period) observed during the solar cycle was 49.2, in February 1805 (the second lowest of any cycle to date, as a result of being part of the Dalton Minimum), and the minimum was zero.(ref: Wikipedia)

Below is what the NOAA Space Weather Prediction Center has offered this month. Sunspot count continues below the red prediction line. 10.7 cm radio flux is about at the prediction level, and the Ap geomagnetic index continues to rise, suggesting that the solar magnetic dynamo might be a bit more active, but that activity isn’t translating into increased sunspots or radio flux.