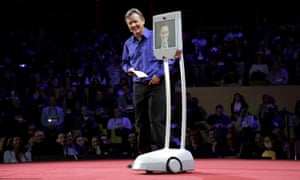 There are lots of people pitching fancy gadgets at the Consumer Electronics Show this week here. Add to that list: Edward Snowden.

The former National Security Agency contractor, famous for handing over western government secrets to the Guardian and other publications, made a virtual appearance at the Suitable Technologies booth here. This was possible because Snowden was speaking from Suitable’s Beam, a sort of roaming screen on wheels used for remote commuting and virtual meetings.

But Beam isn’t just another piece of office technology, Snowden said. Rather, it can be used to subvert governments.

“This is the power of Beam, or more broadly the power of technology,” he said in an onstage interview with Peter Diamandis, a Silicon Valley entrepreneur. “The FBI can’t arrest a robot.” 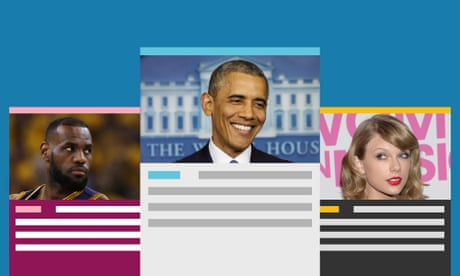 Snowden’s lawyer, Ben Wizner with the American Civil Liberties Union, said in an email that his client wasn’t compensated for the event, which Suitable confirmed. “But he has benefited from the technology,” Wizner said.

Snowden is a unique presence on the showroom floor here. The Suitable booth was next door to a gadget manufacturer advertising “the beauty of made in China”. The US army had a booth nearby.

The former intelligence worker said he actually sees promise in a lot of the gear being pitched at CES this year, assuming companies take privacy and security into account. “They don’t really think of the security of these things very much,” he said.

At various points, Snowden said he is excited about some aspects of virtual reality, artificial intelligence and, yes, Beam.

“What if you could commute to work without having to sit in traffic?” Snowden asked. “The US government basically cancelled my passport, but I’m sitting here in Las Vegas with you guys at CES.”