Experts warn that we should be prepared for more dengue in the US and around the world. ‘Hawaii is a piece of a much bigger phenomenon that’s happening globally,’ says Dr. Peter Hotez at Baylor College of Medicine

It’s peak tourism season in Hawaii, and the state’s Department of Health has issued a warning for visitors and residents: dengue fever is spreading on the Big Island. More than 150 people on Hawaii Island have been infected with the mosquito-borne virus.

Experts say there’s no need to change your travel plans, but warn that we should be prepared for more dengue in the US and around the world. “Hawaii is a piece of a much bigger phenomenon that’s happening globally,” says Dr. Peter Hotez, dean of the National School of Tropical Medicine at Baylor College of Medicine in Houston.

Before 1970, severe dengue epidemics only happened in nine countries. Today, dengue is endemic in at least 125 tropical and subtropical nations in Asia, the Pacific, the Americas, Africa and the Caribbean. Local transmission is starting to happen for the first time in Croatia, France and the Madeira Islands of Portugal. While it was once believed that dengue infected 100 million people annually, the most recent analysis suggests it’s more like 390 million. India, with as many as 33m new infections every year, bears the biggest global burden. 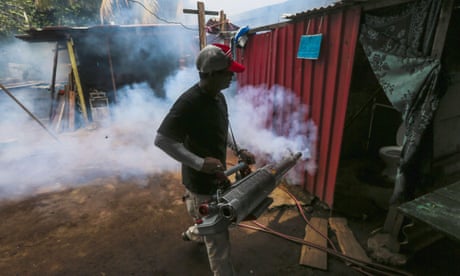 In the US, there’s no vaccine or antiviral treatment approved for dengue fever. The government of Mexico recently authorized the first dengue vaccine, but it will likely be several years before an approval happens in the US. In the meantime, covering up with long sleeves and pants when possible and using a DEET-based bug spray is the best line of defense for people living in or traveling to dengue-infested regions.

“Just using mosquito repellent is really enough to decrease your potential for getting exposed to almost zero,” says Dawn Wesson, an associate professor of tropical medicine at Tulane University School of Public Health in New Orleans.

Like malaria, dengue is transmitted by the bite of an infected mosquito. While malaria is caused by a parasite, four closely related viruses cause dengue. If you get infected, chances are you won’t have any symptoms – only one out of four people do. But you can still pass the virus on if an Aedes species of mosquito bites you.

If you do get sick, it will feel a lot like the flu. Once known as “break bone fever”, dengue causes a high temperature, along with at least one of the following: muscle, joint or bone pain; rash; headaches; eye pain; nausea and vomiting; unusual bleeding, like nose bleeds; or bruising.

In some cases, dengue fever progresses into severe dengue, called dengue hemorrhagic fever (DHF). DHF kills more than 20,000 people every year. Recent research suggests that dengue is much more likely to kill you if you have an underlying health condition, like diabetes. “What we’re seeing now is a confluence of the tropical diseases with noncommunicable diseases,” Hotez says.

The current dengue outbreak on the Big Island is the third to strike Hawaii since 2001. But Puerto Rico, the US Virgin Islands, Samoa and Guam all have regular dengue outbreaks. In recent years, dengue has also made landfall on the mainland, in south Texas and south Florida. 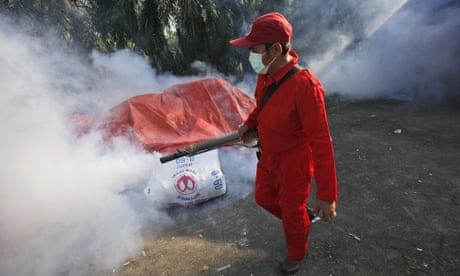 It’s not just dengue that we need to plan for. “We’ve seen a global explosion of viruses transmitted by Aedes mosquitoes … called arboviruses,” Hotez says. Experts predict that two other arboviruses – chikungunya and zika – will soon start popping up in same regions where we’re seeing dengue. In 2014, Florida saw the first local transmission of chikungunya. Wesson says she believes the advanced health system in the US should help prevent massive outbreaks, but poorer nations won’t be so fortunate.

Regular human travel and forced migrations, global trade, poverty, rapid urban growth, climate change and the evolution of the pathogen itself all play a role in the spread of the Aedes mosquito and the dengue virus. Until an effective and widely available vaccine comes around, it will be hard to stop arboviruses from continuing to spread throughout the tropics and subtropics.