Vietnam’s military is steeling itself for conflict with China as it accelerates a decade-long modernization drive, Hanoi’s biggest arms buildup since the height of the Vietnam War.

The ruling Communist Party’s goal is to deter its giant northern neighbor as tensions rise over the disputed South China Sea, and if that fails, to be able to defend itself on all fronts, senior officers and people close to them told Reuters.

Vietnam’s strategy has moved beyond contingency planning. Key units have been placed on “high combat readiness” – an alert posture to fend off a sudden attack – including its elite Division 308, which guards the m

The two countries fought a bloody border war in 1979. The likely flashpoint this time is in the South China Sea, where they have rival claims in the Spratly and Paracel archipelagos.

“We don’t want to have a conflict with China and we must put faith in our policy of diplomacy,” one senior Vietnamese government official, who spoke on condition of anonymity, told Reuters. “But we know we must be ready for the worst.”

Most significantly, Hanoi is creating a naval deterrent largely from scratch with the purchase of six advanced Kilo-class submarines from Russia.

In recent months, the first of those submarines have started patrolling the South China Sea, Vietnamese and foreign military officials said, the first confirmation the vessels have been in the strategic waterway.

Militarily, the tensions are palpable northwest of Hanoi at the headquarters of Division 308, Vietnam’s most elite military unit, where senior army officers talk repeatedly about “high combat readiness”.

The phrase is on billboards beneath images of missiles and portraits of Vietnam’s late revolutionary founder, Ho Chi Minh, and its legendary military hero, General Vo Nguyen Giap.

Perched between Vietnam’s craggy northern mountains and the ancient rice paddies of the Red River Delta, 308 is Vietnam’s oldest division and still effectively guards the northern approaches to Hanoi.

Reflecting deep-set official sensibilities toward offending Beijing, one senior officer, Colonel Le Van Hai, said he could not talk about China. But Vietnam was ready to repel any foreign force, he told Reuters during a rare visit by a foreign reporter.

“Combat readiness is the top priority of the division, of the Ministry of Defense and the country. We can deal with any sudden or unexpected situation … We are ready,” he said.

“High combat readiness”, along with references to the “new situation”, increasingly feature in lectures by senior officers during visits to military bases and in publications of the People’s Army of Vietnam. The phrases also surface in talks with foreign military delegations, diplomats said.

“When Vietnam refers to the ‘new situation’, they are using coded language to refer to the rising likelihood of an armed confrontation or clash with China, particularly in the South China Sea,” said Carl Thayer, a professor at Australia’s Defense Force Academy in Canberra who has studied Vietnam’s military since the late 1960s.

While ramping up combat readiness, Hanoi’s once-reclusive generals are reaching out to a broad range of strategic partners. Russia and India are the main source of advanced weapons, training and intelligence cooperation. Hanoi is also building ties with the United States and its Japanese, Australian and Filipino allies, as well as Europe and Israel.

The outreach covers weapons purchases, ship visits and intelligence sharing but will have its limits. Hanoi shuns formal military alliances under a staunchly independent foreign policy.

Indeed, increases in Vietnam’s military spending have outstripped its South East Asian neighbors over the last decade, according to estimates by the Stockholm International Peace Research Institute (SIPRI).

“They are not doing this for national day parades … they are building real military capabilities,” said Tim Huxley, a regional security expert at the International Institute of Strategic Studies in Singapore.

Vietnam’s foreign ministry said in a statement to Reuters that modernizing the military was standard procedure for all nations.

“The relationship between Vietnam and China is maintaining a positive development trend in all fields, including the defense sector,” the statement said.

While communist parties rule both Vietnam and China and share political bonds, the two countries have a history marked by armed conflict and long periods of lingering mistrust.

Fresh academic research has revealed how the Sino-Vietnamese war in 1979 was more intense than is widely known, rumbling on into the mid-1980s. The two sides then clashed at sea in 1988 when China occupied its first holdings in the Spratly archipelago of the South China Sea – a defeat still acutely felt in Hanoi.

More recently, China’s placement of an oil rig in disputed waters for 10 weeks in the middle of last year sparked anti-Chinese riots across Vietnam.

The rig’s placement on Vietnam’s continental shelf 80 nautical miles from its coast was a game-changer, officials in Hanoi privately said, hardening suspicions about Chinese President Xi Jinping among political and military leaders.

Hanoi dispatched dozens of Vietnamese civilian vessels to confront the 70 coastguard and naval warships China sent to protect the oil rig in mid-2014.

“It was a reminder to all of us just how dangerous the South China Sea has become,” said one retired U.S. naval officer.

For its part, China’s military strategists have long been frustrated at the two dozen military outposts that Hanoi has fortified across the Spratlys since losing the Paracels in 1974, Chinese analysts say. China is building three air strips on man-made islands it is building on reefs in the Spratlys that it took from Vietnamese forces in 1988.

A statement to Reuters from China’s Defense Ministry said the two militaries had close, friendly relations and China was willing to work hard with Vietnam for regional peace.

“Both sides have frank exchanges of view on the South China Sea … both sides should look for a basic, lasting solution both sides can accept,” the statement said.

China’s historic claim to most of the South China Sea, expressed on maps as a nine-dash line, overlaps the exclusive economic zones of Vietnam, the Philippines, Malaysia and Brunei. Taiwan also has claims in the area.

Some $5 trillion in ship-borne trade passes through the waterway every year, including most of the oil imported by China, Japan and South Korea.

The importance to China of protecting its submarine base on Hainan Island – the projected home of its future nuclear armed submarine fleet – could be another flashpoint. Beijing also has jet fighters and many of its best warships stationed around Hainan Island. This South Sea Fleet is close to Vietnam’s northern coast and its vital deep water access channels to the South China Sea and beyond.

Vietnamese generals make clear to foreign visitors they know their limitations. Two decades of double-digit increases in defense budgets have given China a vastly larger and better equipped navy, air force and army.

Foreign military envoys say they struggle to gauge Vietnam’s actual capabilities and how well they are integrating complex new weapons. They are given little access beyond Hanoi’s gilded staterooms.

Vietnamese military strategists talk of creating a “minimal credible deterrent” – raising the costs of any Chinese move against Vietnam, whether it is a naval confrontation or an attack across the 1,400-km (875-mile) northern land border.

If conflict did break out, Hanoi could target Chinese-flagged merchant container and oil ships in the South China Sea, said Thayer, who said he was told this by Vietnamese strategists.

The aim would be not to defeat China’s superior forces but “to inflict sufficient damage and psychological uncertainty to cause Lloyd’s insurance rates to skyrocket and for foreign investors to panic”, Thayer said in a paper presented to a Singapore conference last month. 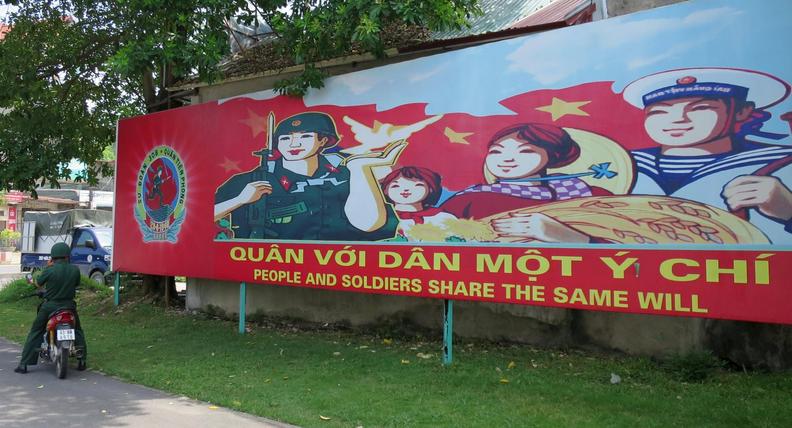 A soldier stands parks his motorcycle in front of a banner at the headquarters of the Division 308 special military force in Xuan Mai town, outside Hanoi July 10, 2015.
Original Article:http://www.reuters.com/article/us-vietnam-china-conflict-insight-idUSKBN0U000320151218