SACRAMENTO, Calif. (INTELLIHUB) — Just as soon as the page refreshed the plane disappeared or ‘went dark’ along with the link, Franchi explained, after witnessing a “Russian Air Force jet” being tracked online over parts of California and Nevada.

Shockingly and for no apparent reason the aircraft appeared to be flying in erratic patterns as documented and posted by Twitter user @M3t4_tr0n. 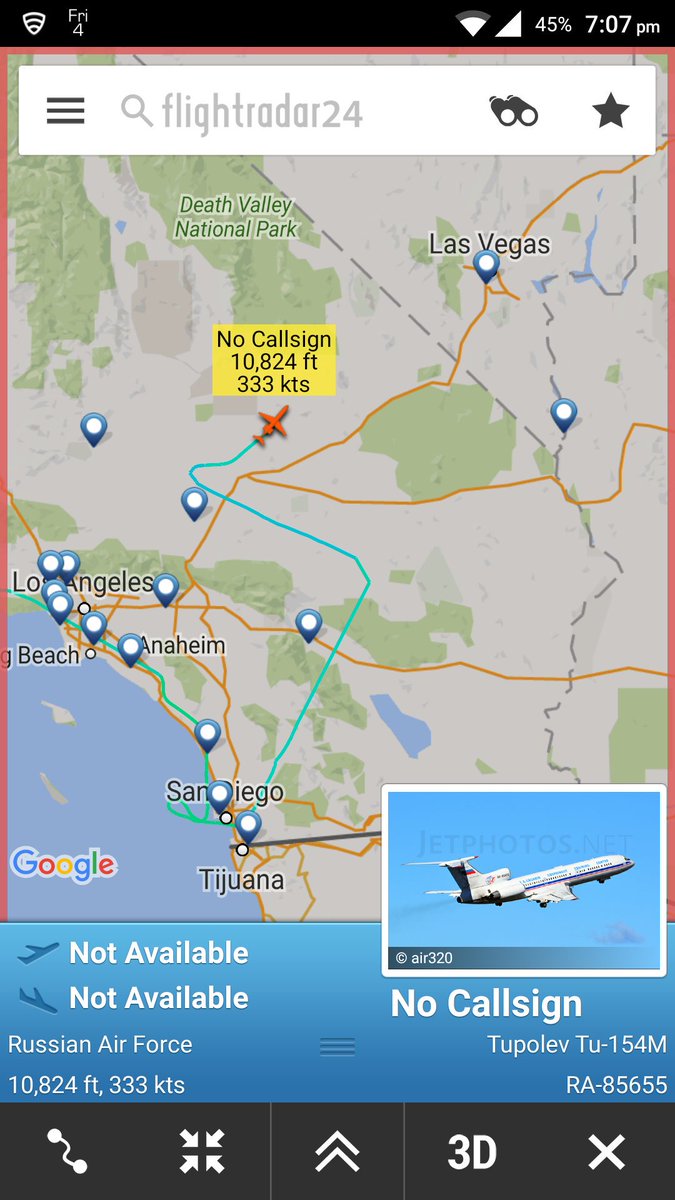 Moreover the very fact that a foreign military aircraft, displaying no call sign, was actually flying over U.S. airspace is alarming to say the least and raises a major red flag with all the fingerprints of a black op. The aircraft was a Tupolev TU-154M ” which is “capable of operating from unpaved and gravel airfields with only basic facilities,” according to Wikipedia, which also makes clear that 13 of the aircraft are still used for military operations as listed below.

The aircraft was confirmed by the app to have been flying between a 4500 and a 10,000 foot altitude, making zig-zag-like passes. Franchi frantically explained how every plane on the app has a call sign “except this one.”

Aside from the blank call sign, this incident is nothing new. In fact CNN reported:

On June 4, according to U.S. defense officials, four long-range Russian Tu-95 Bear-H bombers, accompanied by an aerial refueling tanker, flew into the U.S. Air Defense Identification Zone, an area extending 200 miles from the North American coast, off Alaska, where they were intercepted by U.S. F-22 fighter jets.

Two of the Russian bombers peeled off and headed west, while the other two flew south and were identified by U.S. F-15 fighters within 50 miles of the California coast.

Other attempts have also been made to enter U.S. airspace and have been successful. Like when two “Tu-95 Bear H bombers flew into the Alaska zone on April 22. But unlike most earlier incursions, no U.S. interceptor jets were dispatched to shadow them, said defense officials familiar with the latest U.S.-Russian aerial encounter,” reported the Washington Times.

Youtuber DAHB0077 chimed in on the matter in a new video: