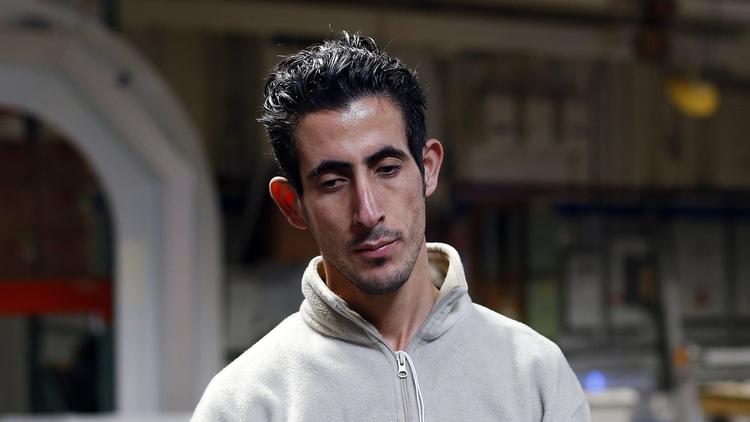 In addition to the mostly Republican governors, GOP members of Congress — including the chairmen of the Senate Armed Services, Senate Intelligence and House Homeland Security committees — have called for a halt to admitting Syrian refugees. A House Judiciary subcommittee will consider security concerns related to Syrian refugees later this week.

The issue gained political traction Monday as the world reeled from the horror of the Paris terrorist attacks, which killed at least 129 people in a string of bombings and shootings. Islamic State claimed responsibility for the coordinated Friday night assault on six locations.

Refugees wait to register with the police Monday in the southern Serbian town of Presevo.

Kentucky’s Republican governor-elect, who will take office next month, also refused. Governors noted that at least one of the Paris attackers had what appeared to be a Syrian passport.

“Given the tragic attacks in Paris and the threats we have already seen, Texas cannot participate in any program that will result in Syrian refugees — any one of whom could be connected to terrorism — being resettled in Texas,” Gov. Greg Abbott wrote in a letter to Obama on Monday.

“I intend to work closely with the president so that he can both uphold America’s traditional role as a place of asylum, but also ensure that anyone seeking refuge in America is fully vetted in a sophisticated and utterly reliable way,” Brown said. “You can be sure that we will do everything in our power to protect the people of our state.”

The State Department plans to take in at least 10,000 Syrian refugees in the current fiscal year and believes it can fund the necessary screening process, although Congress could block the money.

Last fiscal year about 70,000 refugees were admitted to the U.S., 1,682 from Syria, according to the State Department. Of those, 179 were resettled in California. Two California regions already home to Syrian communities received the largest number — 50 in the Sacramento area and 53 in San Diego. At least 19 Syrians were resettled in the Los Angeles area, with two more last month in Pomona and Cypress, according to Martin Zogg, executive director of the Glendale-based International Rescue Committee in Los Angeles.

Each applicant undergoes medical exams, a security check and an in-person interview with immigration officers at the Department of Homeland Security. It can take two or more years for U.S. officials to process Syrian refugees’ applications for resettlement, Zogg said.

“These people are fleeing the very type of violence we saw in Paris,” Zogg said.

Obama addressed the issue at the end of a global summit in Turkey, saying he remains committed to accepting Syrian refugees, who he said face “rigorous screening and security checks.”

“Countries like Turkey, Lebanon and Jordan, which are already bearing an extraordinary burden, cannot be expected to do so alone,” he said. “Many of these refugees are the victims of terrorism themselves. That’s what they’re fleeing. Slamming the door in their faces would be a betrayal of our values.”

On Monday, Florida Gov. Rick Scott wrote to Ryan and Sen. Majority Leader Mitch McConnell (R-Ky.), asking for help to halt the planned resettlement of 425 Syrian refugees in his state.

“It is our understanding that the state does not have the authority to prevent the federal government from funding the relocation of these Syrian refugees to Florida even without state support,” Scott wrote. He called on Congress “to take immediate and aggressive action to prevent President Obama and his administration from using any federal tax dollars to fund the relocation … without an extensive evaluation of the risk these individuals may pose to our national security.”

Presidential candidate Sen. Ted Cruz (R-Texas) said Congress needs to ensure it is not “spending taxpayer dollars to import terrorism.” Sen. Lindsey Graham (R-S.C.) suggested “a timeout on bringing refugees into this country.” And Sen. Rand Paul (R-Ky.), another presidential hopeful, introduced legislation that would impose a 30-day wait on all new arrivals and suspend visas from countries at a “high risk of terrorism.”

But even those who support governors refusing Syrian refugees conceded that states do not have the authority to prevent the federal government from funding the relocation.

“They’re making important political statements, but they have no legal control over this,” said Mark Krikorian, executive director of the conservative Center for Immigration Studies in Washington. He said there had been increasing “pushback against the State Department’s heavy-handed attitude toward refugee resettlement” — not just from Syria, but also Muslim refugees from Iraq, Somalia, Yemen and other conflict zones.

“There is literally no way to screen refugees from the Middle East. There is no way to know who these people are. What are we going to do, call the Damascus police department?” Krikorian said.

His comments echoed FBI Assistant Director Michael Steinbach, who heads the bureau’s counter-terrorism division and testified before Congress in February that officials lack the databases to check Syrian refugees.

“These refugees are the most vetted, they go through more security screening than any arrivals to the United States. It’s not like Europe. It’s a different scenario,” said Kevin Appleby, who directs the Migration and Refugee Services Office of Migration and Refugee Policy at the U.S. Conference of Catholic Bishops, which resettles about 30% of refugees arriving in the U.S.

Appleby was particularly concerned about Michigan, which is home to one of the nation’s largest Arab communities, including Syrians, and which would probably receive more as agencies attempt to reunify families.

“If states can start calling the shots on who they can take and when, it jeopardizes the whole program,” he said. “If we pull up stakes, the rest of the world will, and the terrorists win.”

Eleven states did not come out for or against the program, while 13 states that stood by admitting Syrian refugees included Alaska, Colorado, Connecticut, Delaware, Hawaii, Minnesota, Missouri, Montana, Pennsylvania, Vermont, Virginia and Washington.

“Washington will continue to be a state that welcomes those seeking refuge from persecution, regardless of where they come from or the religion they practice,” Gov. Jay Inslee said, dismissing “fear mongering” and “anti-refugee” comments by fellow governors as “of little value except to divide people and foment intolerance.”

Some members of Congress also bucked the backlash and supported Syrian refugees.

Rep. Adam Schiff (D-Burbank) acknowledged there is “some risk” associated with allowing refugees into the country, but cautioned against overreaction.

“To turn our backs on those escaping persecution, many of them religious minorities, runs counter to the proud and generous heritage of a United States that has always helped those in need during turbulent times,” Schiff said.