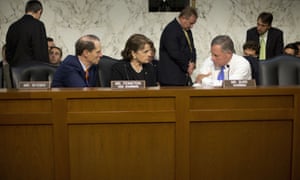 The US Senate overwhelmingly passed a controversial cybersecurity bill critics say will allow the government to collect sensitive personal data unchecked, over the objections of civil liberties groups and many of the biggest names in the tech sector.

The vote on Tuesday was 74 to 21 in support of the legislation. Democratic presidential contender Bernie Sanders voted against the bill. None of the Republican presidential candidates (except Lindsey Graham, who voted in favor) were present to cast a vote, including Rand Paul, who has made privacy from surveillance a major plank of his campaign platform.

Ahead of the vote a group of university professors specializing in tech law, many from the Princeton Center for Information Technology Policy, sent an open letter to the Senate, urging them not to pass the bill. The bill, they wrote, would fatally undermine the Freedom of Information Act (Foia).

Led by Princeton’s David S Levine, the group joined a chorus of critics including many of the largest technology companies, notably Apple, and National Security Agency (NSA) whistleblower Edward Snowden in calling for Cisa to be scrapped.

Snowden, via Twitter, said that “a vote for Cisa is a vote against the internet.”

Cisa would “allow ‘voluntary’ sharing of heretofore private information with the government, allowing secret and ad hoc privacy intrusions in place of meaningful consideration of the privacy concerns of all Americans,” the professors wrote.

“The Freedom of Information Act would be neutralized, while a cornucopia of federal agencies could have access to the public’s heretofore private-held information with little fear that such sharing would ever be known to those whose information was shared.”

Despite protestations that Cisa was not a surveillance bill, co-sponsors Richard Burr and Dianne Feinstein discouraged their colleagues from voting for amendments to mitigate what senators called unreasonable invasions of privacy, including one notifying citizens that their data was being examined. Amendments from Ron Wyden, Al Franken, Patrick Leahy, Dean Heller and Chris Coons all failed, though Wyden’s failed by a very narrow vote.

The American Banking Association and the Telecommunications Industry Association (TIA) applauded the passage of the bill. “The legislation passed by the Senate today bolsters our cyber defenses by providing the liability protections needed to encourage the voluntary sharing of cyber threat information,” the TIA said in a statement. “We applaud the Senate for moving this important bill and urge Congressional leaders to act quickly to send this bill to the president’s desk.”

Cisa was negotiated and marked up in secret. Corporate lobbying group The US Chamber of Commerce has been the only consistent champion of the legislation outside the halls of the Senate; the editorial boards of the Wall Street Journal and the Washington Post both published opinions in favor of the bill today.

The data in question would come from private industry, which mines everything from credit card statements to prescription drug purchase records to target advertising and tweak product lines. Indeed, much of it is detailed financial and health information the government has never had access to in any form. The bill’s proponents said the data would be “anonymized”.
Advertisement

Cisa would create a program at the Department of Homeland Security (DHS) through which corporations could share user data in bulk with several US government agencies. In exchange for participating, the companies would receive complete immunity from Freedom of Information Act requests and regulatory action relating to the data they share. DHS would then share the information throughout the government

Among the bill’s opponents are industry groups representing a broad swath of tech companies, several of which have come out individually against the bill in addition to statements from industry trade groups.

Apple didn’t mince words in its opposition to the proposed law: “We don’t support the current CISA proposal,” the company said in an unattributed statement last week. “The trust of our customers means everything to us and we don’t believe security should come at the expense of their privacy.” Others – Wikimedia, Reddit, Salesforce, DropBox – issued similar statements.

Quietly, though, many major tech sector players are staying on the sidelines. After accusations that the company had been informally calling senators to say they wouldn’t oppose the bill, Facebook said it had not lobbied in Cisa’s favor, but that it did not have a public stance on it. Microsoft and Google, too, have been notable by their silence, though trade associations representing them have publicly objected to the bill.

Facebook has its own threat-sharing program; others within the industry do, too. The program created by Cisa wouldn’t be of much use to them – private industry is widely acknowledged to be further down this road than the government – but regulatory and Foia immunity could come in handy.

The bill must next pass the House of Representatives, a procedure that will likely be much quicker and smoother than the opposition it faced in the Senate from Oregon senator Ron Wyden, among others. Then it must be negotiated by the House and the Senate and then likely passed in a package with two others.

Atypically, security researchers have come out against Cisa, as well, saying it would do little to improve surveillance and would instead spread user information broadly across a threadbare patchwork of government IT systems. Mending that patchwork and others like it in private industry, said researcher Brian Krebs on his blog, Krebs on Security, is a much surer way to improve security.

“While many business leaders fail to appreciate the value and criticality of all their IT assets, I guarantee you today’s cybercrooks know all too well how much these assets are worth,” wrote Krebs. “And this yawning gap in awareness and understanding is evident by the sheer number of breaches announced each week.”

That gap is always going to be worse in the government than in the private sector, information sharing or not, said Jasper Graham, formerly a technical director the NSA.

Even if you mandate something proven to impede data thieves, like public-key infrastructure (PKI) encryption, you’ll hit a wall. “If you say, ‘Everyone now must use PKI!’ you get one small department saying, ‘Actually, we can’t do that,’ and that’s a nightmare.” Graham said. “Regular organizations aren’t really tied to what Donald Trump says tonight in the same way. The government has to do a better job than it’s currently doing, and the best way to do that is to get bipartisan funding.”