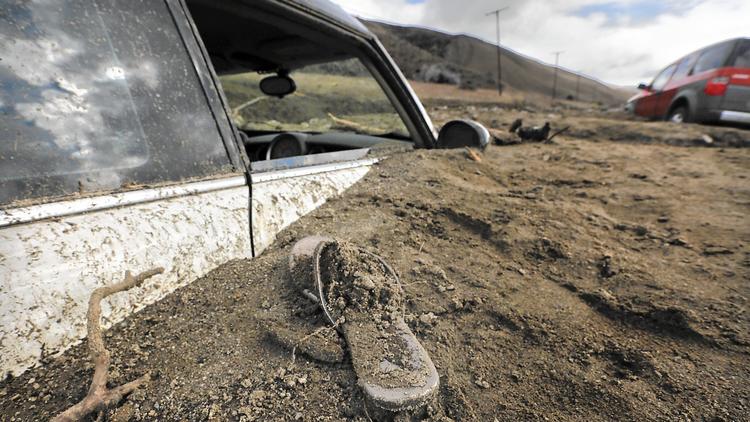 The storm that slammed into the high desert and mountains of Southern California this week was one for the record books.

Intense rain sent massive mudflows onto highways, picking up cars and pushing them into one another. Hundreds of vehicles were trapped in mud up to 20 feet deep; in some cases, motorists were stranded overnight.

In one spot in the Antelope Valley, the storm dumped 1.81 inches of rain in 30 minutes on Thursday, in what the National Weather Service described as a 1,000-year rain event.

October storms are nothing new in the high desert. But experts say the intensity of the deluge is just the latest byproduct of the record temperatures in the Pacific Ocean.

Thursday’s storm was the result of a cutoff low, a slow-moving low-pressure system that gets pinched off from the jet stream and starts its own unpredictable trajectory, said Daniel Swain, a climate scientist at Stanford University.

The warm ocean temperatures — about 75 degrees on Thursday, at least 5 degrees above normal — produced more water evaporation and higher humidity levels. The storm system combined with the high humidity to create enough instability in the atmosphere to trigger the intense thunderstorms and torrential rainfall, Swain said.

The storm was part of the same system that hit Southern California more than a week ago, Swain said. It originally came in from the north, then moved east over the desert Southwest. From there, it “made the strange track of coming to Southern California from the east,” he said.

On Friday afternoon, residents in the Cuyama Valley area of Santa Barbara County were dealing with a new round of flash floods and mudslides that trapped cars. The National Weather Service reported that Bates Ridge saw 1.18 inches of rain in 30 minutes.

Warming Pacific waters has been a topic of growing discussion among scientists in recent years. Amid much debate about the cause, some experts blame the warming for some sea life and bird deaths.

The storm was not related to El Niño, the warm weather pattern that experts say is expected to produce heavy rain in California this winter.

But John Dumas, a weather service meteorologist, said these storms offer a preview of what’s to come.

The last major El Niño to hit California, in the late 1990s, caused deadly flooding, mudslides and other problems. Across Southern California, officials are racing to clear debris basins and make other preparations so that the region’s flood-control systems can combat the expected El Niño downpours.

Thursday’s storm shut Interstate 5 through the Grapevine and sent a sea of mud sweeping through country roads.

One of the most dramatic scenes played out on Highway 58 east of Tehachapi. There, mudslides trapped 200 vehicles, including dozens of tractor-trailers and at least two tour buses filled with passengers.

See the most-read stories this hour >>

In one harrowing video, a driver caught the moment the mud overtook vehicles on the 58. The man, Jose Antonio Vargas, frantically yells in Spanish, “Someone call 911! Someone call 911! Help! The cars are being inundated!”

Truck driver John Tate, 48, stayed overnight in his rig. Surveying the scene on the 58 from his still-stuck big rig Friday, Tate said, “It’s like something you see on TV.”

Tate had been driving from North Carolina to Salinas to pick up a load of strawberries. The rain came fast Thursday. Within five minutes, he said, everything was washed out. Soon, cars in front of him started floating by. He spent the night in his truck, watching the movie “Ghost Rider.”

“It just happened so fast, I don’t think anybody really had time to react,” he said.

Trucker Shannon Doyle was driving east on the 58 when rain and hail poured down. As traffic ground to a halt, truckers began communicating with their radios.

“Everyone was saying, ‘Can’t see. Can’t see,'” the Fresno resident said. “It was just a mess.”

Doyle remained in his truck until 9 p.m. Thursday, when he finally mustered the courage to venture outside. As he and other truckers scanned the sea of mud and cars, Doyle saw four women, covered in mud from head to toe, gripping their purses and blankets, their feet sloshing on the highway.

Search and rescue crews appeared around midnight, followed by heavy equipment that began excavating the mud. About 2 a.m., a helicopter flew over the highway and shined a spotlight over the mountain.

By morning, crews had dug away enough mud to allow tractor-trailers carrying horses and cattle to drive away. At 9 a.m. Friday, Doyle was finally able to turn his truck around to head back to Fresno.

No injuries had been reported as of Friday afternoon, but crews were still plowing through the mess. The highway will be closed between Mojave and Tehachapi for several days, officials said.

In all, the storm left an estimated 300,000 cubic yards of mud and debris on major roadways, including the 58, officials said.

U.S. Sens. Dianne Feinstein and Barbara Boxer on Friday sent a letter to the Department of Homeland Security, U.S. Department of Agriculture and the Army Corps of Engineers asking them to describe the measures taken to prepare for floods and mudslides.

“Given four years of historic drought, a devastating fire season, and likelihood that a strong El Niño will bring heavy rains to California, the risk of flooding is dangerously high,” the California senators wrote. “We are already seeing the potential for disaster.”