The head of the Nation of Islam, Minister Louis Farrakhan, met politicians, pastors and a police chief during his visit to Detroit last week.

But it’s his unprecedented meeting with rapper Eminem over a 2 1/2-hour dinner in his Detroit hotel room that has garnered the most attention.

The leader of the Detroit-founded group was in Southfield and Detroit in recent weeks to talk about his plans for the 20th anniversary of the Million Man March with an event called Justice or Else.

In his meeting with Eminem on Aug. 25, Farrakhan talked about the responsibilities that stars like Eminem have toward society, “to influence people positively,” said Troy Muhammad, a student minister who heads the Detroit branch of the Nation of Islam.

“It was a beautiful discussion,” Muhammad said. “Eminem was engaged. His manager (Paul Rosenberg) was engaged. It was a great time and experience.” 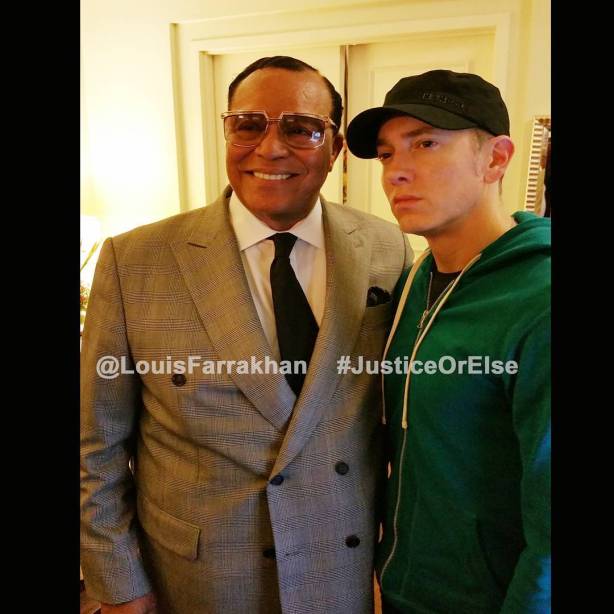 I was very honored to receive my brother Marshall Mathers aka @eminem last night at my dinner table for a beautiful dialogue. #Farrakhan #JusticeOrElse #Detroit

Farrakhan talked to Eminem about “using his influence and using his power through rap music and hip-hop culture to influence people positively, so our children, our youth, can grow into more positive humans,” Muhammad said.

In a post on Instagram, Farrakhan said he “was very honored to receive my brother, Marshall Mathers aka @eminem, last night at my dinner table for a beautiful dialogue.”

The meeting featured Farrakhan, the most prominent black nationalist in America, Eminem, a white rapper who become known for performing in a black-created art form, and Rosenberg, who is Jewish. Farrakhan has been criticized for his what some say are some anti-Jewish remarks.

Rosenberg could not be reached for comment. Members of the Muslim community praised the meeting. In a post on Instagram that featured a photo of Farrakhan meeting Eminem, Hajj Hasaun Muhammad said: “This picture is over ten years in the making. So much happens behind the scenes that I don’t post or talk about, but this one I absolutely had to. Truly epic that the two of them had dinner last night in Detroit.”

During his visit to Detroit, Farrakhan also spoke to a packed crowd at Fellowship Chapel in Detroit, the church led by the Rev. Wendell Anthony, who heads the Detroit Branch NAACP.

Farrakhan had two other meetings and talks, with Detroit-area hip-hop artists and with about 250 local leaders. He met and spoke to Wayne County Executive Warren Evans, Wayne County Sheriff Benny Napoleon, and Detroit Police Chief James Craig, whom he praised in his talk at Fellowship Chapel.

While police abuse has been an issue across the country, Craig has done a good job in Detroit, he said.

“I want to thank the mayor and the police chief for the wonderful work of the police that shepherded me wherever I went in the city,” Farrakhan said in his talk at Fellowship Chapel. “I told Chief Craig, I think he’s a good man. I think he’s compassionate. He’s caring. He has a hard job. He really has a difficult job. He talks about community-based policing. I think that’s a good idea.”

Farrakhan reiterated the Nation of Islam’s message of self-reliance, calling for a force of 1,000 black men to help stop black-on-black violence in Detroit.

Farrakhan also had some strident words in his talk against society, criticizing white people for their actions historically, some Jewish people and same-sex marriage. Citing Biblical history, he said that America would face the wrath of God if it didn’t become righteous.

Farrakhan’s visit last week was the second in metro Detroit over the past month to promote Justice or Else, which will be held Oct. 10 in Washington, D.C.

On Aug. 3, Farrakhan spoke on a Christian TV station in Southfield, the Word Network. His visit was criticized by some white evangelical pastors since Farrakhan is Muslim, but African-American pastors on the show praised his appearance and endorsed his Justice or Else event. The owner of the network is Jewish.

Detroit sent one of the largest contingents to the Million Man March in October 1995 and is expected to send thousands this time for the 20th anniversary. Already, 40 buses are lined up to go, Muhammad said.

The Nation of Islam was founded in Detroit in 1930 and is now based in Chicago. Its message of black nationalism and self-reliance resonates with many in Detroit, which is 84% African American.

“I want you to be with us on 10-10-15,” Farrakhan said at Fellowship Chapel of the Justice or Else event. “We’re going to try and clean up our act. Let us resolve that we’re going to help our community to be better.”