(CNN)Police used tear gas to disperse demonstrators and made nine arrests Wednesday night in north St. Louis as protests continued over an officer-involved fatal shooting of a young African-American man earlier in the day.

Police said Mansur Ball-Bey, 18, pointed a gun at them before officers opened fire.

Relations have been tense between police and some residents in St. Louis for some time now. And protesters did not appear ready to give police the benefit of a doubt a year after Michael Brown, a black teenager, was shot and killed by a white officer in Ferguson, Missouri, a suburb of St. Louis.

His death sparked protests and reignited a national conversation around race and policing.

Dotson also said a car was set on fire and some businesses were burglarized. At night, blazes were reported at houses in the neighborhood.

Police maintained an increased presence at the intersection of Walton and Page, the site of the protests, throughout the night, Dotson said.

Abandoned, boarded up homes line many streets in north St. Louis, where the shooting occurred.

The crime rate is high there, Dotson said. In recent days, a business near the site of the shooting took gunfire, and someone was murdered blocks away.

On Sunday, a 93-year-old Tuskagee Airman who lost his way pulled over in the neighborhood to call his daughter and was robbed. When he asked passersby for help, he was carjacked.

Police routinely search for illegal drugs and stolen guns in the neighborhood, Dotson said. In particular, guns have flooded the state, in part due to gun laws that Dotson complained are “lax.”

Earlier Wednesday, officers were carrying out a search warrant, when two men ran out of the back of a house.

“Officers in the rear alley ordered them to stop and to drop the gun. As they ran, Ball-Bey turned and pointed the gun at the officers. There were two officers in the alley. Both officers fired,” the chief told reporters.

Ball-Bey, who allegedly pointed the gun was struck, and pronounced dead at the scene.

Soon after the shooting, protesters gathered at the intersection of Walton and Page, blocking the main thoroughfare.

Police without shields or crowd control stick cleared the intersection and made some arrests. “People moved to the sidewalk and peace was restored,” Dotson said.

The crowd dispersed and officers officers left, but protesters returned and ended up in a cat-and-mouse game with police.

“We got called back to the neighborhood when a car was set on fire,” Dotson said. There was also a report that a back door had been kicked in.

Protesters marched onto Interstate 70, blocked it and returned to the intersection, he said. Responding officers were struck with bricks and bottles, he added. 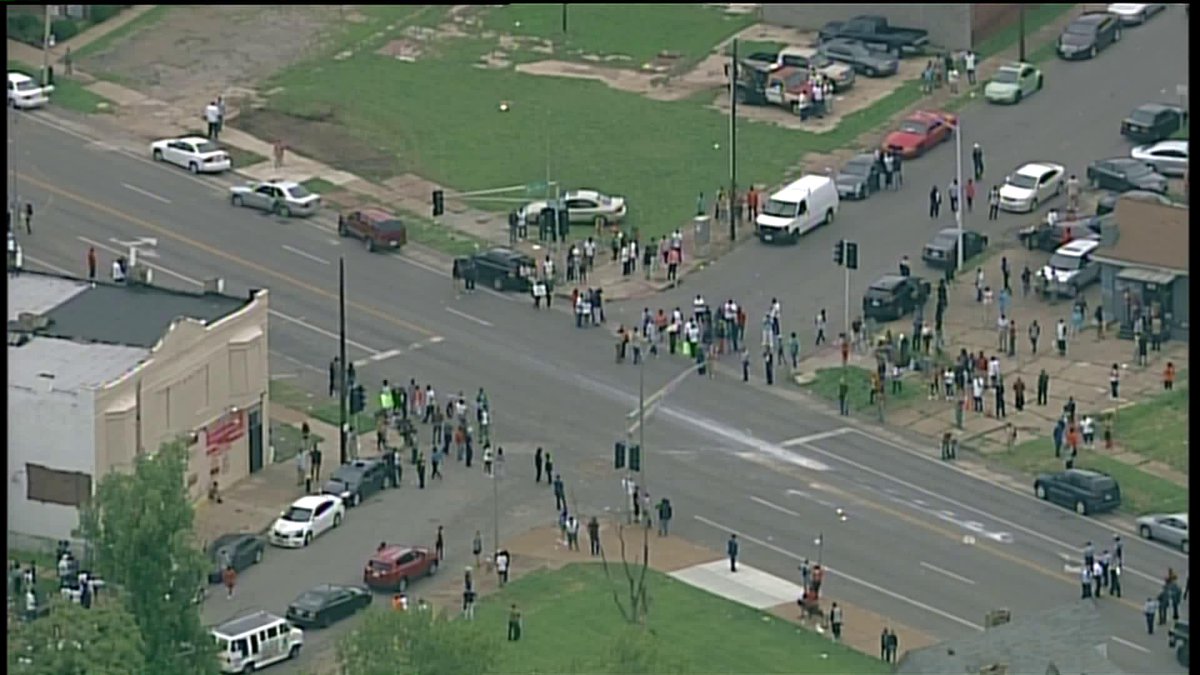 “At at that point, after the crowd ignored repeated requests and directions, inert smoke was used,” Dotson said. “After that didn’t have an effect, tear gas was used.”

Police released video shot from the perspective of officers showing objects flying in their direction, and the crowd running from the approaching police line with raised shields and sticks.

“There’s a line that gets crossed from peacefully protesting, which we will support, to when laws are broken ,” Dotson said. “Police officers have to do their job.”

The two officers involved in Wednesday’s shooting have been placed on administrative leave, per police policy. An investigation is ongoing.

The second suspect who ran from the house remains on the loose.

Other individuals who had been in the house were taken into custody without incident, the chief said.

Officers recovered a total of four guns, including one inside the home, two that were tossed over a fence as the suspects were running and the weapon that the suspect had, according to Dotson. Three of the four were stolen, he said.