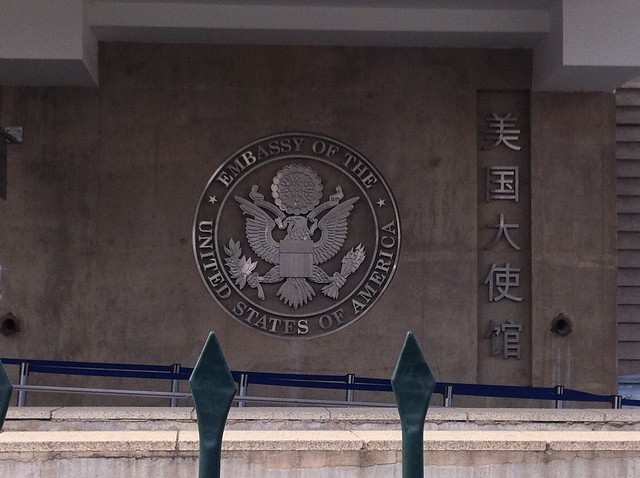 First in “China Sends In Chemical Warfare Troops, Orders Tianjin Blast Site Evacuation After Toxic Sodium Cyanide Found” and subsequently in “Poison Rain Feared In Tianjin As Death Toll Rumored At 1,400“, we documented China’s frantic attempts to reassure an increasingly agitated and frightened public that the air and water are safe after last Wednesday’s deadly chemical explosion at Tianjin.

Although the full environmental implications of the blast likely won’t be known for quite some time, the immediate concern is that rain could react with water soluble sodium cyanide, transforming the chemical into potentially fatal hydrogen cyanide gas.

And while Beijing has already begun the censorship (some 400 Weibo and WeChat accounts have reportedly been shut down), the American Embassy isn’t mincing words.

The following unconfirmed text message is said to have originated at the Embassy:

For your information and consideration for action. First rain expected today or tonight. Avoid ALL contact with skin. If on clothing, remove and wash as soon as possible, and also shower yourself. Avoid pets coming into contact with rains, or wet ground, and wash them immediately if they do. Rise umbrellas thoroughly in your bath or shower once inside, following contact with rain. Exercise caution for any rains until all fires in Tianjin are extinguished and for the period 10 days following. These steps are for you to be as safe as possible, since we are not completely sure what might be in the air. Remember the brave firefighters and their families along with all those suffering from the accident in Tianjin. Stand strong together China!

And meanwhile, the Embassy is “aware” of these social media messages, which it claims aren’t official. Here’s the official line:

Media sources have reported extensively on explosions at the port of Tianjin, China on August 13 and August 15. The U.S. Embassy urges U.S. citizens in Tianjin to follow the guidance of local authorities and avoid the blast area until given further instructions.  We are aware that local authorities are taking measures to prevent secondary disasters and are monitoring air and water pollution in the area to prevent further chemical contamination.  The Embassy in Beijing remains in regular contact with local Tianjin government and hospital officials, and we have no information other than that which has been provided to the public by Chinese authorities.  We continue to liaise with local authorities, businesses, and healthcare providers to seek information on any U.S. citizens who may have been affected by the explosions.