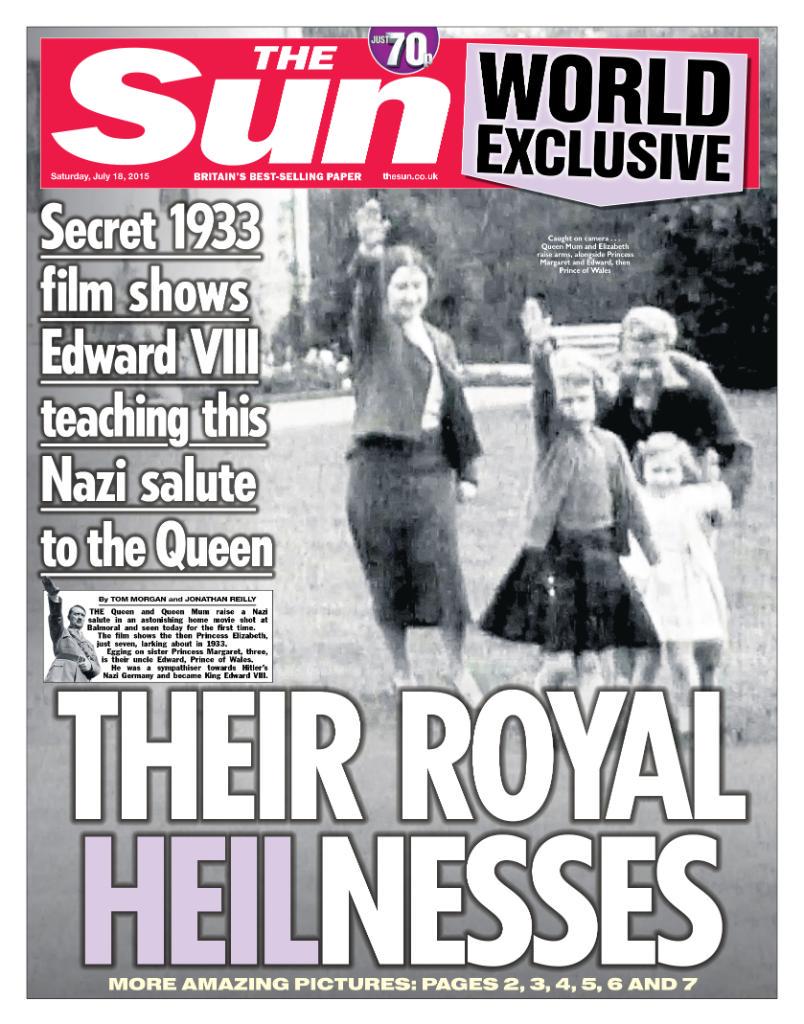 Buckingham Palace has been urged to disclose documents that would finally reveal the truth about the relationship between the royal family and the Nazi regime of the 1930s.

The Sun’s decision to publish footage of the Queen at six or seven years old performing a Nazi salute, held in the royal archives and hitherto unavailable for public viewing, has triggered concerns that the palace has for years sought to suppress the release of damaging material confirming the links between leading royals and the Third Reich.

Unlike the National Archives, the royal archives, which are known to contain large volumes of correspondence between members of the royal family and Nazi politicians and aristocrats, are not compelled to release material on a regular basis. Now, as that relationship becomes the subject of global debate, historians and MPs have called for the archives to be opened up so that the correspondence can be put into context.

“The royal family can’t suppress their own history for ever,” said Karina Urbach of the Institute of Historical Research at the University of London. “This is censorship. Censorship is not a democratic value. They have to face their past. I’m coming from a country, Germany, where we all have to face our past.”

The Sun was subjected to a backlash on social media, after publishing 80-year-old home movie footage from the grounds of Balmoral Castle, in which a laughing Elizabeth, her mother, Prince Edward (later Edward VIII) and Princess Margaret, were shown making Nazi salutes. Barbara Keeley, Labour MP for Worsley and Eccles South, retweeted a message that read: “Hey @TheSun, if you want to stir up some moral outrage about a misjudgement in history, look a bit closer to home.”

Many expressed incredulity that the paper had published the actions of a child. But the managing editor, Stig Abell, defended publication. “It is an important and interesting issue, the extent to which the British aristocracy – notably Edward VIII, in this case – in the 1930s, were sympathetic towards fascism,” he said. The paper declined to comment on how it acquired the footage. Legal experts suggested a police investigation was unlikely, especially given the collapse of recent cases in which Sun reporters walked free after being accused of paying public officials for information.

“On the face of it, this information has been obtained legitimately and used in accordance with what the newspaper feels is appropriate interest,” said John Cooper, QC.

“It’s really a question not so much on the law but whether it’s in the public interest for this material to find its way into a newspaper. The public interest in this document being produced is nothing to do with the royal family but how startling it is that in 1933 people were so naive about the evils of Nazism.”

Urbach, author of Go-Betweens for Hitler, a new book about the relationship between the royals and the Nazis, has spent years trying to gain access to documents relating to Nazi Germany held in the royal archives. She described the archives, in Windsor Castle’s Round Tower, as “a beautiful place to work but not if you want to work on 20th-century material … you don’t get any access to anything political after 1918”.

She described seeing shelves of boxes containing material relating to the 1930s that no one is allowed to research. She suggested that much of the archives’ interwar material no longer existed.

“We know that after ’45 there was a big cleanup operation,” Urbach said. “The royals were very worried about correspondence resurfacing and so it was destroyed.”

Helen McCarthy, a historian of modern Britain at Queen Mary University of London, echoed Urbach’s comments, tweeting that “if Royal Archives were more accessible & welcoming to researchers, ‘shock’ discoveries like Sun’s front page could be put in better context”.

Historian Alex von Tunzelmann suggested on Twitter that the lack of access to the royal archives for historians and the public “is profoundly undemocratic. We need much greater access. We need to be grown up about it. The history of this country belongs to the public”.

Paul Flynn, Labour MP for Newport West, a member of parliament’s influential political and constitutional reform committee and a prominent supporter of the recent release of Prince Charles’s confidential memos to politicians, said the royal family needed to allow full access to its archives, including those relating to Germany in the 1930s.

“It was a very interesting part of our history, when we had a future king who was flirting with the Nazis and the Blackshirts, and we need to know the truth of it,” Flynn said. “We need more openness. The royals have great influence still. Charles is still the most important lobbyist in the land.”

The Sun’s decision to publish the 17 seconds of footage, thought to have been shot in 1933 or 1934, has served as an unwelcome reminder for the royal family of its past links to the Nazis. The Queen, then aged six or seven, joins her mother, then Duchess of York, and her uncle Edward, the Prince of Wales, in raising an arm in salute as she plays alongside her younger sister, Princess Margaret. Her mother then raises her arm in the style of a Nazi salute and, after glancing towards her mother, the Queen copies the gesture. Prince Edward is also seen raising his arm.

Edward, who abdicated to marry the American socialite Wallis Simpson, faced numerous accusations of being a Nazi sympathiser. The couple were photographed meeting Hitler in Munich in October 1937.

A palace spokesman said: “It is disappointing that film, shot eight decades ago and apparently from Her Majesty’s personal family archive, has been obtained and exploited in this manner.”