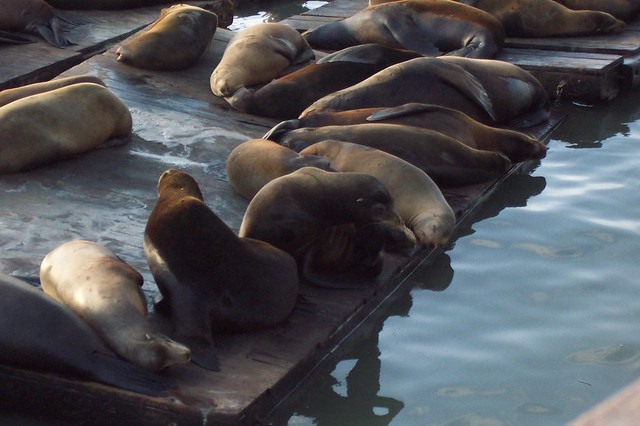 (NaturalNews) The West Coast ecosystem is in a state of dire collapse. The Southern California sea lion population is dwindling to new lows as countless hungry and emaciated pups wash ashore. There’s simply not enough food to go around for the mammals. Some believe the acidity of the waters is intensifying, not allowing certain species of fish to survive. The sudden decline in sardine biomass off the West coast is directly impacting larger animals in the food chain like the Southern California sea lions. A record number of these beautiful sea mammals have been rescued since 2013, when an unusual “mortality event” was declared. As the animals struggle to find food, some appear to be getting vicious and may now attack humans for food.

In fact, a fisherman recently had a violent altercation with a sea lion at a San Diego marina. As he was holding a large fish and posing for a picture, a sea lion jumped from the water, hopped on deck and lunged at the man and his prized catch. The sea lion effectively took the fish and pulled the man into the ocean. Authorities said the man was injured. San Diego Fire Rescue spokesman Lee Swanson reported that the violent altercation resulted in the fisherman being carried underwater for 15 breathtaking seconds. When the man was rescued, he was taken to a local hospital and treated for cuts on his arm and hand.

Why are sea lions becoming vicious?
Official sources may propose that global warming is causing mass migration of fish away from the West coast, resulting in starving sea lions, but slight fluctuations in water current temperature may be part of larger cycles and shifts that naturally occur in the ocean.

Other sources say a rise in ocean water acidity is making the West Coast waters less palatable for fish to live in, ultimately starving the sea lions of their prey. This could be true, since the byproducts of industrial waste leach into groundwater, unleashing toxins into streams, rivers and then ultimately the ocean. In this investigation, snail shells are reportedly thinning and cracking under pressure because rising ocean water acidity is making them extremely fragile.

Also, some suggest that Fukushima radioactive pollution is affecting the overall health of the Pacific Ocean.

Then there’s the fact of overfishing. Sea lions may simply be starved off the West Coast because fisheries are taking in more sardine biomass than can be replaced naturally. Consequentially, the sea lions are forced to go on longer voyages to find food for their young.

The Pacific Fishery Management Council has the responsibility of recommending annual harvest specifications for the U.S. fishery to conserve important populations of fish. The Council makes its determinations by measuring stock biomass for the Pacific sardine northern subpopulation along the entire West Coast up to 300 nm offshore.

Could overfishing be at the heart of the ecosystem collapse on the West Coast?