For decades, researchers have debated whether Santa Catalina is sinking or rising.

Now there is new study that makes the case that the island is sinking, albeit very slowly.

A Stanford University researcher says new underwater imaging suggests Catalina could be completely submerged in 3 million years, though that remains in dispute. He also contends the movement could pose a tsunami risk for Los Angeles and Orange counties. 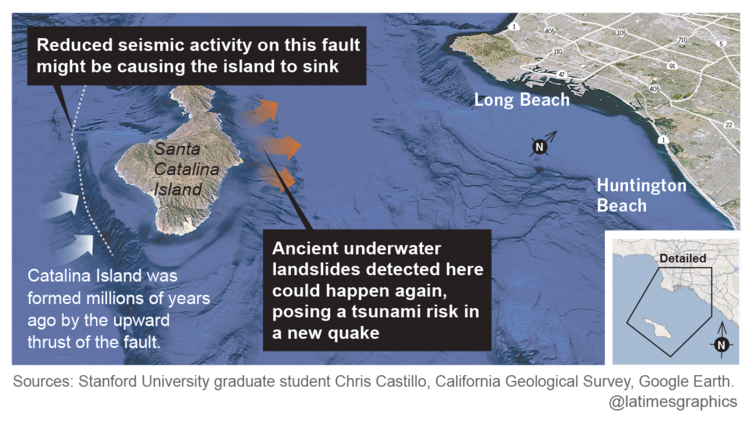 The imaging showed evidence of ancient beaches that Castillo said have sunk below the ocean’s waves. The images also showed a large underwater landslide that occurred off the island’s northeastern shore about 500,000 years ago.

If a submarine landslide happened again, with tons of rocks and dirt plunging toward the ocean floor, that could create a tsunami heading toward the ports of Los Angeles and Long Beach and the Orange County coast, he said.

In fact, Castillo said his imaging suggests that the side of Catalina closer to the mainland is sinking faster, so the island is tilting at a slight angle toward Long Beach and Orange County. That would make it more likely a landslide could happen again, Castillo said.

Further research is needed to better understand how big the tsunami would be, Castillo said. “It’s still something that could do significant property damage, especially for the marinas…. If you see something that could be dangerous, you need to find out more about it.”

The California Geological Survey’s tsunami program manager, Rick Wilson, agreed that a tsunami could have struck the coast from Catalina when the submarine landslide occurred about 500,000 years ago. But he said the agency is more interested in submarine landslides in the last 10,000 years; a half-million-year-old deposit is considered very old.
If you see something that could be dangerous, you need to find out more about it. – study author Chris Castillo

“If it’s half a million years, it’s a much older — something that, maybe, it doesn’t have the potential to repeat right now,” Wilson said. “We try to really focus on sources that happened either in the last 10,000 years or have the potential of occurring again in the very near future.”

Castillo disagreed that there was less of a risk and said there could even be a higher risk because there haven’t been landslides in a long time. “The whole island is tipping, so there definitely is a risk,” he said.

Catalina was once part of the sea floor, Castillo said, but began rising from the ocean as a result of heightened seismic activity on the nearby Santa Cruz-Santa Catalina Ridge fault zone. But about 1 million years ago, the fault zone became less active, resulting in the island’s gradual sinking, he said.

Castillo estimates Catalina is sinking an average of 1 millimeter every five years.

Castillo’s research comes amid a century-old debate on Catalina’s fate. Catalina is unusual in that, unlike other Channel Islands off the coast of California, it does not have ancient flat beaches that have been lifted up by earthquake activity. In 1897, one researcher also suggested that Catalina was sinking as well.

Researchers from the U.S. Geological Survey came to a different conclusion. A study published in 2012 in the journal Geomorphology reported what the authors said was credible evidence that the island was rising up like many other places in Southern California.

The lead author, U.S. Geological Survey geologist Randall Schumann, said the presence of ancient flat beaches under the ocean is not proof that Catalina is sinking. The island could still be uplifting; it’s just that sea levels have risen since the last Ice Age, Schumann said.

That’s why there are underwater ancient flat beaches that surround other Channel islands that are known to be lifting up, Schumann said.

On Catalina, the lack of ancient, raised flat beaches called marine terraces above sea level can be explained in two ways, he said. One, the island is moving up so fast that the ocean never has time to cut a flat beach on the shoreline. The other reason: Ancient flat beaches have been washed away by powerful streams falling off swiftly rising hills.

What would help definitively determine what’s going on is finding datable fossils deposited at sea level thousands of years ago, he said. Then, scientists can use that date — and how high that fossil is today — to determine if the island is lifting up or sinking down.

Schumann said, however, that those kinds of fossils just haven’t been found on Catalina.

“So far, no one has been able to produce conclusive evidence of either uplift or subsidence on Catalina,” Schumann said. “It is encouraging to see that scientists are continuing to determine a definitive answer to this complex question.”

Castillo’s study was presented at the Seismological Society of America meeting in Pasadena this week.